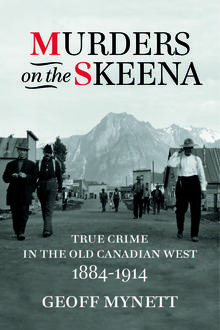 In this edition of Under the Cover we peer back into time through archival photos of small-town British Columbia—the setting of  Murders on the Skeena: True Crime in the Old Canadian West, 1884-1914 (Caitlin Press). These black and white images of the day reveal the past as if it were something straight out of a wild west movie—"a man’s world full of crime, booze, and the search for gold."

See more details below
Tagged: murders on the skeena, geoff mynett, caitlin press, under the cover

The cover of Murders on the Skeena shows a fascinating archival photo (courtesy of the Prince Rupert and City Regional Archives) highlighting Omineca Street in Hazelton, with a clear view of the Rocher Déboulé Range in the background. Hagwilget Peak, south of Hazelton and named after the community of Wet’suwet’en in the area, is visible. Hagwilget means “the quiet people,” and it’s an interesting coincidence that there’s a sense of quiet, almost an eerie calm-before-the gunfight, felt in the photo. Men in wide-brimmed hats and suspenders walk down a wide street lined with saloons and hotel rooms. Their eyes are all cast downwards. No one appears to be speaking. It could be the set of a Western movie: a man’s world full of crime, booze, and the search for gold—the perfect image for a book title that begins with the word "murder." 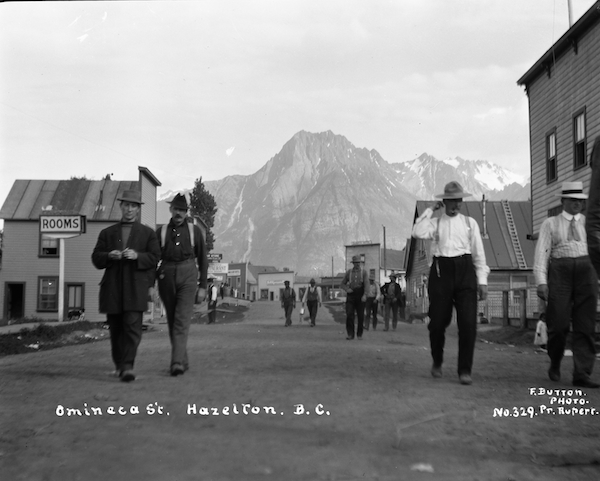 Caitlin Press's Sarah Corsie chose the image because the perspective felt very present and immersive. “There’s movement in the image you don’t often see in photos from the time,” she says. The image also helps to locate the book geographically while showcasing what the town of Hazelton would have looked like at the turn of the century. Although the people and buildings have long since gone, the mountain appears exactly as it did in 1911 and serves to bridge the gap between then and now.

The title font is mirrored after the lettering on Hazelton’s old Union Bank of Canada sign. Opened on April 26, 1912, the bank was a one-storey cabin constructed of 50 and 25 logs. Staff thought the risk of robbery would be low due to the remote location, which would make escape difficult. Of course, the stories in Murders on the Skeena show that this did not deter everyone...

Thank you to Caitlin Press and author Geoff Mynett for sharing more about Murders on the Skeena with us!

April 7, 2017
Under the Cover: Sleuthing the cover art of Wind Leaves Absence