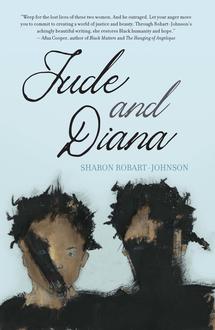 Under the Cover: Jude and Diana

We go Under the Cover with Roseway Publishing to discuss author Sharon Robart-Johnson's latest novel Jude and Diana, based on the lives of historical figures from the 1800's—including the character of Jude, a black slave girl murdered for stealing food for her and her starving sister. Robart-Johnson confronts the challenge of writing the voice of an oppressed person that history knows so little about. PLUS see details below for an exclusive ALU GIVEAWAY on IG for a chance to win a copy of Jude and Diana!

See more details below
Tagged: jude and diana, roseway publishing, under the cover

Jude and Diana tells the fictional story of two overlooked figures in Canadian history. The only two mentions of Jude are first in the Book of Negros, listed as a 9-year-old enslaved girl landed in Shelburne, Nova Scotia with the Loyalists in 1783. The second is the transcript of her murder trial in 1801.

"Jude has long intrigued me," says Sharon Robart-Johnson, the author of Jude and Diana. Robart-Johnson came across Jude while doing archival research for her first book, Africa's Children: A History of Black in Yarmouth, Nova Scotia. "I didn't want her to become just another statistic in the stories of murdered slaves. I wanted to imagine what her life was like." Jude was murdered for stealing food for herself and her sister, which Robart-Johnson insists has a deeper meaning. Why would someone steal food? "It meant she was starving. Starved," she says, and that last line points the finger directly at the slave-owning family who murdered her.

Robert-Johnson had a lot cut out for her when writing this book. There was not much information about Jude or her family in colonial archives that determined whose lives were important enough to include, and what was recorded about Jude or other enslaved people at the time also had to be parsed through the inaccuracies of racist language and assumptions coming from those who recorded it at the time. So she had to grapple with the moral question: how do you re-create an oppressed person's voice when there is so little known?

The author, a thirteenth-generation African Nova Scotian from the same area, has at least one ancestor who she knows was enslaved. She wanted Jude's story to be achingly true to the brutality of enslaved people's lives, but she also wanted to highlight the love and joy that enslaved people could experience, too. So, she had to strike a balance: "The violence depicted in the story is informed by the depositions I found on record, which described Jude's injuries in detail. Because of the severity of her injuries, there was no other way to tell her story, and I wanted readers to understand the unjust pain enslaved people lived. But injecting joy in the midst of all that shows the resilience of enslaved people. Jude's story celebrates her love of family...they made their own happiness. I wanted to understand for myself that there could be love and joy and happiness in an enslaved person's life as well."

The publisher, Roseway Publishing, says it's crucial to support reclamation stories from descendants of enslaved people. "The lives written out of colonial history are unknowable, but Robart-Johnson's project is to use fiction to fill in the gaps in those archives; she uses historical records and archives to inform her storytelling. It is a necessarily inexact method, but we understand the project of imagining lived of ancestors as crucial to healing intergenerational trauma—forging ancestral bonds from what is known in spite of what was taken by colonialism and slavery."

Jude and Diana tells a story of practising resistance as part of survival. The story itself, but also Robart-Johnson's writing of it in the face of so little information and such ethical quandaries, demonstrates how structurally oppressed people exercise their power even in unjust circumstances.

Thanks to Anumeha at Roseway Publishing for sharing the story behind Jude and Diana now available on All Lit Up for 15% off this month!

*IG GIVEAWAY* We've partnered with Fernwood Publishing ( @fernpub) to give away 3 copies of Jude and Diana by Sharon Robart-Johnson to 3 lucky winners. Head on over to ALU's IG page (@alllitupcanada) to see more details on how to enter!