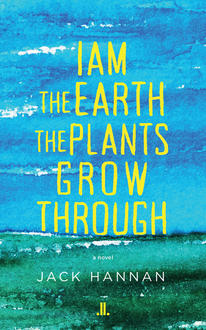 Montreal-based novelist and poet Jack Hannan struggled to put pen to paper for years before coming across one of John Berger's book during a bookstore shift: "It lit a match to my imagination, and I was looking for books that were like candles, the way you can spend a lot of time touching a finger into the flame, playing with the wax." Below, Jack talks writer's block, his newest novel  I Am the Earth the Plants Grow Through (Linda Leith Publishing), and nurturing writerly momentum with good notes.

See more details below
Tagged: jack hannan, i am the earth the plants grow through, linda leith publishing, under the cover

What Are You Doing? On Writer’s Block

In December 1983, I wrote a poem of 124 lines titled “Put Yourself in my Shoes.” It was published as a little chapbook by Villeneuve Publications on New Year’s Day, 1984. After that, I was not able to write anything for a little more than twenty years. I felt that I could no longer hear the language. The part of me that writes had become an outsider in my own life. During those years I had my full family life, jobs, cars, we did renovations, but when I tried to write words on paper, a few lines of poetry, say, or the beginning of a story, I found it impossible, lifeless.

Still, I tried. Over those years when I couldn’t write a sentence, I planned out a series of five novels, The Poet of the Blueline and His Friends, The Language Poet and Her Friends, The Merchant Poet and…, The Wandering Poet and…, The Stealing Poet and…. I imagined their stories and structure. I could graph the architecture of them all on rolls of brown shipping paper pinned up on the wall, but I couldn’t write the stories down. And whenever I tried, stuck at a loss again, I’d roll up the paper and put those thoughts away for six or seven months, a year, until they began to come back. Ideas will find a person.

I also slowly lost the will to read. I was working in bookstores (I have always worked with books), but picking them up and beginning to read sentences came to feel as foreign as writing my own.

One Christmas, Deborah Shea gave me a copy of Allan Ginsberg’s letters to and from his father, Louis Ginsberg, and suddenly I sat down and read that. Maybe it was the format, letters, people talking to each other, chatting.

Soon after, in the store where I worked, I unpacked a few copies of John Berger’s book, And Our Faces, My Heart, Brief as Photos, first published in 1984. I loved that book, the way it looked, the way it felt. It seemed to me very free in its thinking, the way it presented itself, the way it thought of itself in my hands. I learned that a book can be like that. “Part One is about time, Part Two is about space.” It lit a match to my imagination, and I was looking for books that were like candles, the way you can spend a lot of time touching a finger into the flame, playing with the wax. Maybe you don’t even hear what the conversation around you has turned to. I was looking for books like that.

Since then, I have read all of John Berger’s books a number of times, except I Send You This Cadmium Red, though one day I will find a copy of that too. He is the writer I’d most recommend. I take his example, imagine him telling me, try to find other ways to think about what you’re doing, which is a way of thinking about who you are, or who I might become, those important, barely noticeable developments. And then he would add, hmm? But once I start considering books to recommend, the list can go on forever; Paco Taibo III, Anne Boyer (Garments Against Women), Anne Carson, Eduardo Galeano, Elmore Leonard. Read the sentences of James Salter (but come the revolution, all those characters in his books are toast. Toast, I tell you). I once had a dream that Elizabeth Smart was my grandmother, and, privately, I still like to feel that’s true. We are at a dinner party. The title of my new novel, I Am the Earth the Plants Grow Through, is a quotation from her work.

So I was reading again, all that language running through my head was the cure for writer’s block. In 2005, I opened the scrolls of my unwritten books and pretty soon realized that it was a project I would never accomplish, and didn’t actually want to. But I did have some characters I liked and something for them to do, the thread of a story lying on the brown paper, and I began to write a book that would eventually be published as The Poet is a Radio. I got up at 5am every morning and wrote for an hour before everyone else woke and the day began. This was my perfect ritual, that hour every day, no matter what. I probably missed Christmas morning, but not New Year’s. We had a coffee maker with a timer on it, so that coffee was ready when I went to the kitchen, and I don’t think I could ever have done it without that coffee maker. I would recommend all writers buy a coffee machine with a timer.

"I like being with a project for a few years as it grows and becomes what it turns out to be."

The book is only 170 pages long, but writing it took forever. Years. As it went along, I came to enjoy writing it more and more. I was learning something about being alive, patient and attentive. I carried little black notebooks to jot things down on the subway or waiting in line somewhere. Much of the first draft was written on subway cars. Sentences came to me! I began to feel those characters as companions. Those people, I should say, always at the back of my mind. Almost everything that happened through a day somehow related to them.

I enjoy writing novels because it takes so long. I like being with a project for a few years as it grows and becomes what it turns out to be. Writing, when it’s going well, is a bit of a trance, no? Slip down into the pool of thought, a kind of self-hypnosis. This is when writing is its own reward. Though it can be thrilling to know someone is reading it later. A perfect writing day now would seem very quiet for anyone watching. They could think that nothing is happening. What writer hasn’t answered the exasperated question, “What are you doing?” When I was young a perfect writing day would have started at midnight and gone on for eighteen hours with a lot of fuel, but I’m a morning person now. It begins after breakfast, still with coffee. Music plays, but never vocals, those voices. I write on a laptop for a couple of hours. If ever there was a fire at our home, I would leave my passport but run for the laptop. Often I have made notes the night before and I start with that. Then a break, lunch, go outside shopping, thinking about supper, walking around, looking at people. Probably I’ll read for a while. Return to the laptop around 3pm and shut it down at 5. Deborah and I will meet in the kitchen. We’ll spend the evening together. Maybe we’ll visit, maybe we’ll share a crossword, a movie, some reading. Hopefully I’ve collected a few notes over the day; this is a good way to nurture momentum. Hemingway advised that a writer always leave something unwritten, a paragraph, as a place to start the next day. An excitable notebook can do that too. 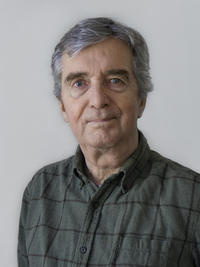 Jack Hannan has been a hotwalker, a typesetter for Fred Louder, a bookseller, and a publisher. He is a novelist and poet who lives in Montreal, Canada, not far from the house where he was born. His first book was published in 1977, and his first novel, The Poet is a Radio, was published in 2016. His work has been shortlisted for the A. M. Klein Prize for Poetry and the Hugh MacLennan Prize for Fiction. His family knows he is either at home or will be back soon.

I Am the Earth the Plants Grow Through is available for preorder on All Lit Up. 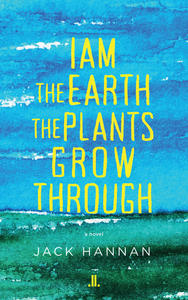 I Am the Earth the Plants Grow Through