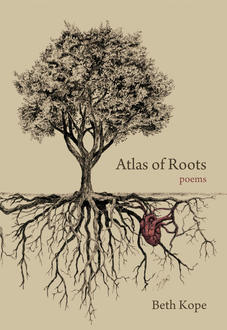 Beth Kope's third collection of poetry  Atlas of Roots (Caitlin Press) is a moving and personal reflection on the many facets of adoption. Tugging at the threads of her missing family history, Kope shares her quest to find her adoption records and the truth of her own conception. Beyond the personal, Kope explores the larger world of adoption with stories from other adoptees and parents of both relinquished and adopted children. From ancestry tests to adoption search angels, Kope tells us more about the search for her personal history and shares a poem from her collection, below.

I’d like to sit with you over a coffee, tell you the story of how I found my sister’s birth mother.

I’d start by saying I didn’t try to find her.

Instead, a series of uncanny coincidences brought them together.

Years ago, far from the province we were born and raised in, I happened to share a childhood memory with a friend. Why did I tell her that when I was young, my mother remarked how much my piano teacher looked like my sister? How amazing that my friend happened to know the same family, that they happened to be from her mother’s own small town? That my friend’s aunt happened to work in social services, happened to remember the adoption file, able to confirm birth dates and details? That is the short version, tidied of the leaps between happenings, the inexplicable frissons while narrowing in on the truth. All leading to a meeting in my friend’s kitchen between my sister and her birth mother as I witnessed.

My brother had already found his birth mother. It wasn’t a happy story. But when both my siblings found answers, it underscored my longing to find any scrap of information. To have names, see faces, find my familial links.

There was always a weight in my heart when I attempted to discover more. In a poetry workshop, I was given a prompt to write our “Night of Conception.” Without forethought or plan, my poem was, without a doubt, about a rape. That stopped me in my tracks. Susan Griffin’s work, A Chorus of Stones, explores how family trauma is held within, a cellular kind of knowing. And writing that poem clarified my long-held belief that my birth mother was traumatized, deeply angry, and had no desire to hear from me.

There is a section in the book titled Could One of These Stories Be Mine? Those poems were distilled from hours of discussions with people who had a connection to adoption; a birth mother who’d relinquished her baby, adoptees who found their parents, adoptees whose birth parents found them. Story after story after story. A man rescued from Auschwitz by a Danish doctor told me he kept following thread after thread to glean answers about his origin.  A Sixties Scoop baby. Someone who learned their mother had given up a sibling before marrying their father. I asked, they shared.

Adoption isn’t rare, it is imbedded in our culture, as a way of building family, a way of building support in a familial setting for children in need. It is positive, it is negative, the layers lie like sediment on my skin. For so many, a disconnect. Of questions posed and answers sparse.

More poems, more questions. For the sake of the questions, I took an ancestry DNA test. When I learned I have British, Jewish and Swedish ancestors, that didn’t cut it. I wanted story, not a pie chart of my body’s DNA. But that DNA test meant an adoption search angel in Ontario could piece together details that I’d never had before. A name. a phone number, in small town Ontario. And the search angel called her.

I don’t know if it was the right thing. Honestly. The search angel told me that she had never, ever, heard such anger and pain. And this, decades later. Yes, my birth mother was raped. Yes, she hid this secret from everyone.

What did I want from this woman, still traumatized, still aching? Well first, I wanted her to know that she was not to blame. Somehow hearing she felt at fault hurt like hell. (She told the search angel “I should never have gotten in that car.”)

I wrote a letter. I sent photos of myself, as a baby and little girl, as a young woman, and then, with my grandchildren (her great grandchildren). I didn’t expect an answer. I did it out of love. Hoped she would feel something good had come from trauma and pain.

It is what it is, as I felt in my bones. More questions than answers. A birth father she will not name, and who I know only as a rapist. I look for her photo and find nothing. She is very circumspect on line. I look for half siblings and find three sisters. I struggle with the immeasurable gaps in my story.

It has been a difficult decision to respond to your letter.

I do not want to resurrect the past. It was painful, and I

was filled with so much anger and hate by it all. I told no

one, buried the memory very deep and tried to get on

with my life. It is good that you have a happy life. You have

a lovely family and are writing your own family history. I

am sorry if this does not answer your questions. It is all

EXCERPT FROM ATLAS OF ROOTS

“we are like stones: our own history and the history of the world embedded
in us, we hold a sorrow deep within….”
—Susan Griffin, A Chorus of Stones

I am stone holding secret, found in mud. I am the stone under water
scoured smooth.  I am the stone tossed from you palm, a random
connect disconnect: what drew you to my shape, why did you lift me
from the beach?

I am the stone you hold in your pocket, absently caressed. 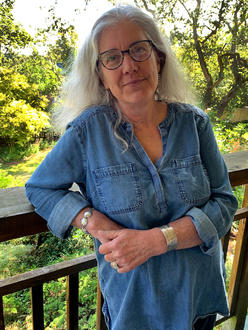 Beth Kope grew up in Alberta and is honoured to live, work, and play in Victoria, BC, Coast Salish territory of Lekwungen and WSANEC nations. Kope has taught in Alberta, Adelaide, Australia and Quebec and currently works at Camosun College. She has published two poetry collections and has been included in the anthologies Refugium: Poems for the Pacific (Caitlin Press, 2017) and Sweet Water: Poems for the Watersheds (Caitlin Press, 2020). Kope's first book, Falling Season detailed her mother's decline due to an aggressive form of dementia called Lewy Body, which BC BookWorld described as "poems of honest dismay and almost unbearable sadness." Her second book, Average Height of Flight (Caitlin Press, 2015) was a meditation on West Coast landscape and grief and a poem from the collection was featured in Poetry in Transit. Kope has read at Word on the Street Vancouver, been a featured reader at Planet Earth Poetry, The Writer's Studio Reading Series, and The Victoria Festival of Authors. She is the co-host, along with Yvonne Blomer, of the annual Forest Poet-Tree event which is part of the Victoria Festival of Authors.

Thanks so much to Beth Kope for this very personal story behind her new collection Atlas of Roots —  available right here on All Lit Up.

February 3, 2021 by Morgan Murray
A Mature and Intelligent Period of Grieving: On Death and Humour in Writing