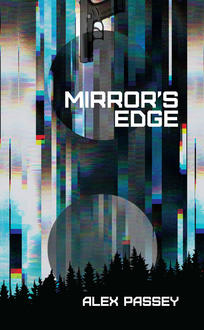 Alex Passey's novel Mirror's Edge (At Bay Press) is a philosophical trip through two polarized worlds — a hyper-capitalist, burgeoning transhumanist society and a community-minded, woodland paradise — and the fallout when those ways of living collide. Below, Alex tells us about the politics explored in his novel and what good speculative fiction is for him.

Imagining new worlds, whether they be realms of unbridled fantasy or simply a mirror of our own world, only nudged slightly askew, is a paradoxical practice. On the one hand, imagining such worlds allows us an escape from the drudgery and often unromantic existence of this anchor world, which fully co-opts the existence of our corporeal bodies. I don’t mean to sound bleak, because it is true that there is much magic in this world for those who take the time to see it. But it is also true that the bond between this world and our physical bodies is constant, and that bond’s capacity for magic is finite. So we often find ourselves crafting other realms in which we might find the magic, escaping that bond as best we can to seek worlds accessible only through the vehicle of our shared imagination.

But on the other hand, in this escapism to imagined worlds, we are often granted a shift in perspective which allows us to examine ourselves and the world in which we live, in ways that aren’t so easy when we are physically present. This perspective shift allows us to engage with fundamental aspects of our world, like cultural practices or social norms, that are not always so simple for us to examine while immersed in them directly, much like the fish typically lacks understanding of the water in which he swims until he finds himself thrashing about on the bottom of a fisherman’s boat.

To a certain extent, even our collective reality is tenuous, and we are all left to imagine our shared world as we individually see fit. This can be an overwhelming task, and so the temptation is always present to contract out that labour to cultural or ideological institutions to soothe us with the blanket of their grand narratives. But while these blankets may be comforting, we must not allow them to put us to sleep. When we immerse ourselves too fully in cultural or ideological institutions, we forfeit our capacity for imagining worlds to their grand narratives, and all our credulous imaginings end up confined to their prescriptive framework. Thus, we find the scope of our imagination limited, and empathy deadened towards all those alien worlds floating outside the orbit of the universe crafted of our accepted grand narratives. But those alien worlds may have much to teach us.

And perhaps now more than any time in the last eighty years, it is important for us to be able to detach ourselves from the grand narratives around which institutional powers shape our societies. We can look to history, but we can also just look at the polarized world around us to see what happens when people take their grand narratives too seriously, to the point where we have people essentially living full-time in different worlds from each other. We can see the fallout when those worlds collide. This is a major theme I try to explore in my new book, Mirror’s Edge, not by getting bogged down in the partisan politics of our shared world, but by exploring new worlds beyond them where we might examine the fundamental human nature that has brought us to this brink.

In Edge, we find ourselves exploring two very different worlds. One is Rath’s world, a hyper-capitalist society saturated in increasingly invasive technology. The other is Sara’s world, a pristine, woodland paradise, where people live off the land and a sort of clerical magic binds their community. One does not need to look far to see where I derived inspiration for imagining Rath’s world, but the inspiration for Sara's came nearly a decade ago, during one of my many attempts to make peace in my personal battle with social anxiety.

"I found merit in the idea of attachment being the root of all suffering, and the suggested practices of subverting the ego."

I was learning what I could about Buddhism and eastern spirituality, along with the facsimiles thereof that are so popular here in the west. Much as there are legitimate criticisms to be made about the spiritualist self-help industry, and the way it thrusts responsibility for all the world's ills onto the individual while forgoing conversations of deeper systemic problems, I did find some solace there. I found merit in the idea of attachment being the root of all suffering, and the suggested practices of subverting the ego. (Though like many others before me, I eventually also found that it is not so easy to simply philosophize yourself past mental illness.)

But then I did what I usually do, what I would never advise anyone to do, and I explored some online communities rooted in this new thing in which I took interest. And I found what you often find in such online communities. An echo chamber filled with people on a constant quest to mould themselves into the perfect embodiment of the grand narrative their community is rooted in, castigating anyone who deviated from the acceptable dogma, patting each other on the back for properly embodying the dogma, while also forever collectively refining that dogma to be more esoteric and exclusionary.

But there was something unique about some of the people I found in these communities of new-age spiritualism that made it even more jarring than others. In their self-perception of their own mysticism, there was a kind of communal divinity with nature that they fancied they enjoyed, which extended to the entire universe, except for fellow human beings who failed to meet their contrived standards of enlightenment. And thus, Sara's world was born.

"Even if we see one world much closer in relation to ourselves than the other, if we dig deep enough, we might find that the grand narratives which drive these communities, separated by dimensional boundaries of reality, are not that different."

So whether it is Rath’s world of burgeoning transhumanism, where social media is transplanting sociability and corporate branding is religion, or Sara’s world, that has eschewed industrialization and embraced a path of mysticism and communality with nature, even in such seeming polar opposites, these are mirrors of our own world. Even if we see one world much closer in relation to ourselves than the other, if we dig deep enough, we might find that the grand narratives which drive these communities, separated by dimensional boundaries of reality, are not that different. The world we live in is a chaotic mess of competing cross-narratives, where truth is a slippery thing, and I do try to bring some of that to the book. But I also try to pin these grand narratives down so that we might rightly examine them, and perhaps through that, examine those of our own world.

Along with the detachment that allows us to engage our world from a different perspective, Mirror’s Edge also strives to provide the escapism as well. One can find much to be positive about exploring the cultural nuances of both worlds through the sunny, idealist lens of Sara, with her optimistic curiosity. But also through the lens of Rath and his Camusian absurdism, so that we never fall into the trap of taking things too seriously, at least for as long as Rath himself can avoid it. Because the magic I was speaking of earlier, it doesn’t come from philosophical dissection of society. It comes from the ability to laugh, whether it be at a dad-pun or from the kind of dark joke that you could never tell while meeting your mother’s eye. It comes from the ability to feel emotion for the people around us and the world we live in, even if they’re just shared hallucinations we derive from staring at ink on paper. The magic is those moments of elation when we find ourselves as something more than a Self in this world, when we shed the preoccupation of physical locality and commune as something more.

I suppose it’s fairly ironic that I don’t think there is anything more important in this world than our capacity to imagine different ones. I hope you’ll take the time to imagine the worlds of Mirror’s Edge with me.

Alex Passey is a novelist and poet, living in Winning. In addition to Mirror's Edge, he is also the author of the upcoming high fantasy book From Heart's Fire Forged.

Thanks to Alex for sharing the imagination behind  Mirror's Edge  — now available for sale on All Lit Up.