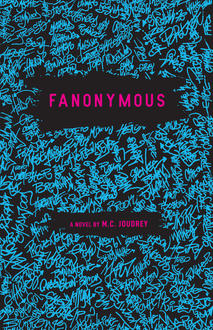 After experiencing episodes of momentary sight loss, author M.C. Joudrey was compelled to carefully research and write a blind character into his novel Fanonymous (At Bay Press), which has recently been transcribed into braille by the National Network for Equitable Library Service (NNELS). Below M.C. Joudrey tells us about his experience bringing Fanonymous into this new format in order to serve a marginalized readership.

It happened as I was simply going through my mail. While reading my annual mortgage statement four years ago, my vision suddenly blurred. With each passing minute, I lost more of my sight until all that remained was a kaleidoscopic version of reality made up of small, moving fractals.

I have since learned that this episode was the result of scintillating scotoma, a medical term that describes this kind of temporary vision loss that often precedes migraine headaches.

The experience was downright terrifying and my head filled with alarming possibilities—am I having a stroke? Suffering an aneurism? Could I be going blind?

While one could easily conclude that one’s financial statements could be the cause of a multitude of psychosomatic maladies, the truth is that I only lost my vision for a minute, maybe two. The scintillations dissolved and my vision slowly returned. But I won’t forget the fright of those few minutes.

At the time I was writing a novel, the title of which would become Fanonymous. The book explores how art can propel social change, with a subplot focused around the tension between fame and anonymity, with the latter being the last true vestige of individual freedom.

After this episode of momentary sight loss (and a handful more that followed), I decided to somehow attempt to incorporate this experience into my novel in some way. I reached out to the Canadian National Institute for the Blind (CNIB) to see if they could help with my further research. The CNIB connected me to Tracy Garbutt, an Independent Living Skills Specialist with the organization, who was pivotal in providing insight and authenticity into character development that I would have otherwise easily overlooked. (In my novel, a character named Loraina loses her sight at the age of seven and as a result acquires very specific and honed skills, including mastering echo-location). I cannot thank Tracy enough for his invaluable contributions during these many months of research.

Through correspondence that I had as the publisher of At Bay Press, I became aware of a program offered by the National Network for Equitable Library Service (NNELS) that transcribes select literature into braille. We began the discussions with Riane Lapaire and Laurie Davidson at NNELS and arranged to have the Fanonymous manuscript readied for a braille book. The manuscript was then given over to Rebecca and Emmanuel Blaevoet at Tactile Vision Graphics Inc. in Windsor, New Brunswick.

In its finished braille format, Fanonymous is 11.5” wide x 11” high x 2” thick. To accommodate the now considerable length, the book is bound into four volumes. Each volume is remarkably light. The pages are easily turned without friction, each page laying flat to allow for more accurate reading. 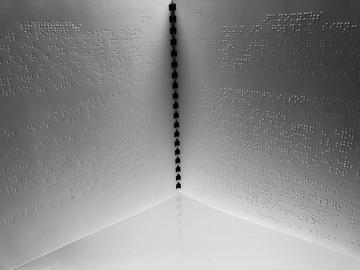 A spread from Fanonymous in braille.

The original text included a map of Winnipeg, Manitoba, which is now included in braille format. The tactile nature of the braille map is truly spectacular, with raised textures applied to streets, rivers and landmarks. 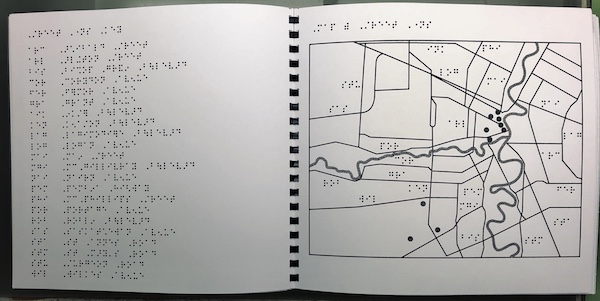 A braille map from the book.

As both a writer and publisher, sharing stories is paramount. Being able to connect with a wider audience has not only been rewarding but also—as in this case—worth so much more to me than I could have imagined.

Fanonymous will be available in electronic braille from the NNELS repository, and in physical braille through interlibrary loan from Western Manitoba Regional Library in Brandon, Manitoba. Requests can also be made directly to NNELS who can facilitate distribution to libraries that would like to acquire a copy for their collection. Special orders can also be placed with At Bay Press via email at publisher@atbaypress.com.

M. C. Joudrey is a Canadian writer, artist, and designer. His collection of short stories, Charleswood Road: Stories, received a Manitoba Book Awards nomination for Most Promising Writer. He has been a member of the selection committee for the CBC Short Fiction Prize and a jury member for the Manitoba Book Awards. He is also a bookbinder with works held in various galleries internationally as well as the publisher of At Bay Press.

The National Network for Equitable Library Service (NNELS) is a repository of content owned and sustained by Canadian public libraries. NNELS works with international partners, libraries, readers, and publishers (particularly Canadian ones) to make copies of books in accessible formats available to readers in Canada who have print disabilities.  Work on this project has been made possible thanks in part to support from the federal government’s Social Development and Partnership Program – Disability Component (SDPP-D).

Thanks to M.C. Joudrey for sharing the process behind getting his book transcribed into braille and to NNELS for the work they do. Fanonymous is available now on All Lit Up. 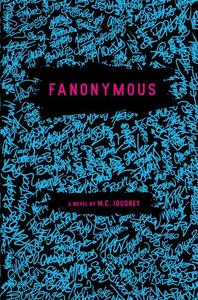