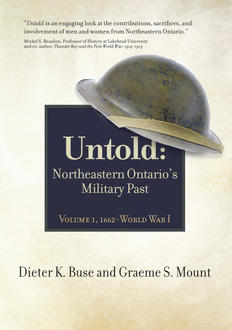 Under the Cover: Researching Family War History with Tips from Latitude 46's Untold

Dieter Buse and Graeme Mount spent the last few years researching and writing about northeastern Ontario's military history, bringing the stories of this region's past to life. In their newly released  Untold: Northeastern Ontario’s Military Past (Latitude 46 Publishing), they offer insight into the region's role in the war effort, but also tips—and writing space—for readers to delve into their own family war history.

In researching and writing their first book Come on Over: Northeastern Ontario (2011) the authors noticed few references made in local histories of the military and that sadly no books existed on regional contributions to Canada’s military campaigns and struggles. In Untold: Northeastern Ontario’s Military Past, Buse and Mount show, with specific examples, that northeastern Ontarians fought in every major conflict, and won recognition in many. But their own battalions were broken up or submerged in others so they have not been acknowledged. “Like all historical presentations, the military accounts should be full and fair,” explains Buse. “So, we add a corrective and offer recognition for the sacrifices and contributions of men and women from our region. Usually historians have ignored places with sparse population or not noted the complete makeup of military units.”

Compiling the contributions and experiences of Northeastern Ontario residents, most of whom are no longer alive, was an enormous task.

The authors searched for lists of military personnel, and examined those of the deceased compiled by Royal Canadian Legions and libraries. They noted the names on cenotaphs and reviewed soldiers’ files available through Library and Archives Canada (LAC) to establish who fought and where they came from. Through a LAC collection known as Circumstances of Death Registers they uncovered how the soldiers died.

The authors researched militia units formed in the region during the late 19th century, which eventually supplied the base for recruitment at the beginning of World War I. “Then we tried to establish what happened to people recruited for wars from here during and after conflict,” explains Buse. “We discovered as we traced the main battalions formed here, that soldiers from the northeast were placed in units identified with south, central and eastern Ontario, so their contributions and achievements were credited elsewhere.”

The authors also sought public input through media and social media and received leads on stories, letters, memoirs and diaries. They visited libraries and archives in towns and cities where they found many local compilations and stories, visited Legion halls to collect information and review artifacts, such as pictures. They consulted military heritage officers, archivists, examined battalion war diaries and newspaper archives.

Untold provides further information on how the authors pieced together stories. Here Dieter Buse gives All Lit Up readers some advice on how to start in their own research:

• If the person served in the First World War, their service and medical file is digitalized and available at Library and Archives Canada’s website. Do a search with the title “Soldiers of the First World War.” Use the site which offers “search personnel files.” When the site appears enter the family and first name of the person being searched in the boxes. If there is a file the first page of the sign-up paper or attestation form will appear. In the middle of the page should be underlined in blue a link to the whole file. Some files are simple, others complex. LAC guidelines in the search section offers help with abbreviations used by the military. Some files contain surprises on where soldiers served, for example in the Forestry Corps or on sexually transmitted diseases. Nursing sisters and officers are in this database.

• Once you have a soldiers file and if it says “KIA” [killed in action] or died of wounds, you can turn to another LAC collection under the title “Circumstances of Death Registers.” This is also completely digitalized, but ends in middle of surnames with the letter S. Once you have accessed the collection simply put in surname and first name to find out how a person died, if known.

• On each soldier’s service file there is a Regimental number and these can be used to find out who enlisted at same time by checking the numbers before and after the soldiers number by entering it in the same Search system.

• In the soldier’s file there will be information on the battalion (military unit of about one thousand soldiers) in which the soldier served. Once you have that battalion number you can search for a nominal roll for that unit using “nominal roll” and battalion number. Not all are available but those that are provide a detailed list including address of next of kin.

• Once you have the soldiers battalion it is possible to check the War Diaries of the unit by a search using “war diary” with unit number. This will lead to another LAC site in which the places where the unit fought and its engagements can be followed.

• Ourontario.ca is an extensive database with access to many community newspapers.

Thanks so much to Laura Stradiotto and Dieter Buse for sharing this informative and helpful piece with us. For more Under the Cover, click here.

February 27, 2018
We Shall Not Forget: Remembrance Day Reads

November 11, 2014
Where in Canada: Life lived at the edge of Lake Ontario