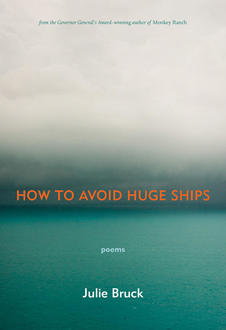 How to Avoid Huge Ships is named after an out-of-print mariner’s guide by Captain John W. Trimmer. I’d long been intrigued by unusual instruction manuals of the Bombproof your Horse sort, but Captain Trimmer’s also had a cover that made it hard to miss.

When I began working on poems for my new collection, I borrowed his book from our public library. I had an inkling there was something to be gleaned from it as source material. Since I couldn’t renew Huge Ships forever (I have a super-sized fear of angry librarians), I returned my copy, assuming I could always request the book again. Wrong! A small industrial complex of aspiring stand-up book critics had started posting very funny mock-reviews of the original Huge Ships on Amazon, and the price of used copies soared. Library copies were promptly stolen, and thus became listed by online sellers for $300.00 and up. Someone even published a parody of the entire book.

The original How to Avoid Huge Ships was intended for recreational boaters. Its central conundrum, made manifest even in the introduction, was Captain Trimmer’s assertion that if you’re in the way of a huge ship you are done for, since these vessels maneuver like “sick cows.” The rest of the book explains why—in sections which echo the “Ten Plagues” from the Passover Haggadah: “Darkness,” “Fog,” “Rain,” “Crowded Sea Lanes,” “Being Overtaken,” and even, “The Dance of Death.” Only the plague of frogs is missing from his list of hazards sure to befall readers as they set sail.

At the time, I couldn’t have explained why I needed such a book, but once I learned how difficult it had become to find, I grew obsessed.  An available copy finally showed up through a maritime library, and bingo! —I had my title. Captain Trimmer’s book is a treatise on how to avoid the inevitable and escape the inescapable. Such a pointless exercise neatly summarizes my new book. It is why I write.

Stealing this title was also, I realized recently, a stroke of marketing (ahem!) genius. When my new book was already at the printers, I googled the title and was instantly reminded why I have an MFA degree and not an MBA. The top hit was a Publisher’s Weekly feature about the fuss at Amazon over the original book and its mock-reviews: “The Worst Book Ever” proclaims the headline, “Is How to Avoid Huge Ships.”

Julie Bruck’s third collection, Monkey Ranch, received the Governor General’s Award for Poetry in 2012. She will be reading from How to Avoid Huge Ships in five Canadian cities this fall, with a sixth stop in Brooklyn, NY. A long-time Montrealer, Julie lives in San Francisco. For events and information: www.juliebruck.com

Thanks to Julie Bruck for letting us in on the title inspiration for How to Avoid Huge Ships, and to Kitty at Brick Books for connecting us. For more Under the Cover, click here. 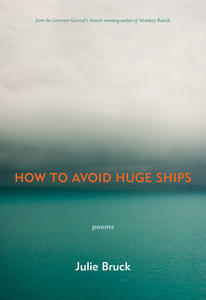 June 29, 2017
Where in Canada: Mountains meet Prairie in The Plotline Bomber of Innisfree

November 16, 2015 by Josh Massey
Freedom to Read Week & The Place of Public Libraries