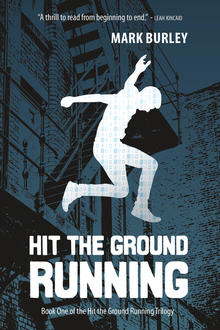 Under the Cover: Hit the Ground Running

The jumping off point for Mark Burley's parkour-based adventure novel Hit the Ground Running (Blue Moon Publishers) began after a father-daughter afternoon at an art gallery and evolved into a fast-paced young adult novel (and trilogy) about a boy who goes on a mission to find his parents after they are abducted.

I find it interesting how an idea can grow and change—evolve, really—like a living thing.

When she was nine or ten years old, I took my daughter to see an exhibit of ancient Egyptian art and artifacts at the Art Gallery of Nova Scotia (AGNS). She had a thing for history and Egypt in particular, knew more about it than most first-year anthropology students, and was really excited to go, so it seemed like a good idea at the time...

The AGNS is an interesting place, worth checking out if you’re in Halifax. The Egyptian exhibit was set up in a series of rooms in one section, linked together, so to see everything we walked from one area to another. This setup gave the curators the opportunity to change the atmosphere with the content. It was all fascinating; there were statues and carvings, jewelry and ornaments, writing samples, pottery, that kind of thing. And there were mummies.

She knew they’d be there—they were the centrepiece of the exhibit—but for some reason being in the same room was a little different than she’d expected. Some were laid out in glass cases, and several were inside sarcophagi, but some were right there, with nothing between you and the three-thousand-year-old corpse. Plus, the curators had the creepy dial set a little higher for these displays. I’ll give her credit—she did okay...until she looked through a hole in one of the caskets and saw a gnarled hand curled up next to the shrunken body inside, and that was it for her.

The mummy got me thinking about longevity and the human compulsion to extend life. I heard a news feature once on CBC Radio where a scientific theorist talked about enhancements in cellular regeneration that could prolong life—he used the word “indefinitely”—and said one or two thousand years was a nice round number that reasonably could be expected for people living today. I wondered what the world would be like if people, otherwise unchanged physiologically, started living ten or twenty times longer than we typically do.

Sometime later when I was looking at options for a new writing project, I did what a lot of clever and resourceful writers do: I poked my family for ideas. My daughter, with images of mummies still imprinted on her brain, suggested I write about a boy whose parents are Egyptologists who go missing while on an expedition, and he has to go find them. That idea grew and evolved over several editorial generations into Hit the Ground Running.

The “running” bit was actually part of that evolution. A fun part of writing fiction is that you can take all the things you find really cool and use them in your work. Once I had a place to start, I could mess around with things like mysterious artifacts, legendary creatures, lost civilizations, big wave surfing, Hitchcock movies, creepy things that come back from the dead, Wing Chun Kung fu, people trying to live forever and maybe succeeding, and, as advertised, parkour.

The parkour aspect was big on more than one level. I think it’s amazing to watch pros do their thing, but the philosophy applies to a lot of situations, not just in the pure sense of running up and down buildings. There’s a peace of mind to it, a calmness and clarity that allows the right thing to happen at the right time, that makes the correct course of action feel like the most natural, obvious thing available. It’s automatic despite the size and shape of the obstacle. I use the same principles when writing; I lay the groundwork, I trust, and I allow action to evolve naturally, to flow. The parkour component evolved this way. It wasn’t there in the beginning, but it established itself quickly and it paralleled my experience of moving through the novels.

One of the interesting things about my daughter’s take on life is that she’s all about being in the moment—unless it’s to ask what’s for dinner and why it isn’t noodles—and she’s the most positive, resilient person I’ve ever met. If you asked her how she feels about providing the inspiration for her dad’s books, she’d say, “It feels great!” and then go on to whatever she was doing next. It’s the kind of spirit I know will live forever. 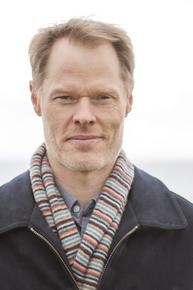 Mark Burley is originally from Truro, NS, and now lives outside Halifax with his wife and children. He attended Dalhousie University to complete his science degrees and cultivate the writer seed that was planted when he was a kid

Thanks to Mark for sharing the story behind Hit the Ground Running, and to Talia at Blue Moon Publishers for making the connection. For more Under the Cover, click here.