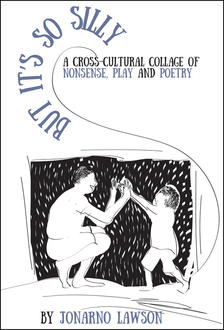 Under the Cover: Culture and Creativity in But It's So Silly

Award-winning author JonArno Lawson spent a decade researching fun and games. In his new book But It's So Silly (Wolsak and Wynn Publishers), JonArno looks at how culture and creativity meet, where imagination comes from, and how children around the world play. In this edition of Under the Cover, he tells us how this project came together.

See more details below
Tagged: but it's so silly, under the cover, jonarno lawson, wolsak and wynn

Assembling But It’s So Silly over the course of a decade came about as a conscious — though at first only semi-conscious — endeavour to gather adult/child play traditions (and/or innovations) from across the world. All while not having to stray too far from home! The title for this book was originally Around the World by TTC, though that didn’t fit the final work. My hope was to learn new ways of being, and also of writing, and to pass on some of what I’d learned to anyone else who was interested.

After my first child was born, back in 2001, I started to take note of how other people were playing with children — especially people not necessarily born or raised in Canada. I jotted things down, tried things out that I was observing with my own child (and later, children) and came to realize there was a whole body of knowledge about how to play with children that I knew almost nothing about.

In 2007 I applied for, and received, a research grant from the Chalmers Foundation. The point of the research was not to write a book, only to do research. I did many interviews, watched many parents and care-givers, filmed people playing, and ended up with two banker’s boxes full of material.

All of this felt like it might be becoming a book in spite of itself — but it was resisting a final form. I also kept coming across new material. Even now I feel shocked that I’m writing about something that’s actually finished.

Other books that needed to be written or finished more quickly kept slowing things down too, and often those books were influenced by, or even sprang in some way from this research. Maybe part of my fear of finishing was a sense that the magic I was drawing on would dry up, or disappear?

Luckily for me, no book, or story, is ever truly finished, even if the book is published, or the details of a story have been recounted in exactly the same way for centuries. We weave our own dynamic interpretations through them, and sometimes that inspires us to tell them over again in a new way.

The most satisfying responses I’ve had to the book have come from people whose memories of their own childhood rhymes and games have resurfaced as they’ve read it. On the one hand, it makes me regret not finishing long ago — on the other hand, there’s really no end to this material. The creative language and action play that takes place between adults and children must be as old as humanity itself, and will last, no doubt, as long as we do.

JonArno Lawson is a four-time winner of the Lion and the Unicorn Award for Excellence in North American Children's Poetry. In 2011 his poetry collection Think Again was shortlisted for the Ruth and Sylvia Schwartz Children's Book Award. Sidewalk Flowers won the Governor General's Award for Illustrated Children's Books in 2015. JonArno lives in Toronto with his wife and three children, all of whom assist the author with phrases, topics, and sometimes even complete lines for use in his poems.

Thanks to JonArno Lawson for sharing the story behind But It's So Silly, and to Noelle at Wolsak and Wynn for making the connection. For more Under the Cover, click here.