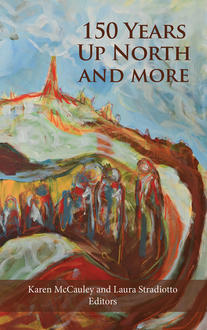 Under the Cover: 150 Years Up North and More

150 Years Up North And More (Latitude 46 Publishing) collects creative non-fiction stories about the colonization and immigration in northern Ontario told by a variety of writers from Indigenous storytellers to new immigrants. Today Editor Laura Stradiotto tells us more about the making of the anthology, below.

See more details below
Tagged: 150 years up north and more, under the cover, latitude 46 publishing

The chitter-chatter of Arabic blends with the sweet smell of cardamom, welcoming me into the home of Hussein Qarqouz on a sunny December day. With a warm cup of tea in my hands, I nod toward the voice recorder on the coffee table, explaining we are just going to have a conversation and then use his own words to form a story. I ask about life in Syria before the war, his bakery, his family and how they came to Canada.

The father of four quips he is used to the snow and frigid temperatures of northern Ontario, so he must be a true Canadian. Two-year-old Omar scoots around from brother to brother, eyeing me strangely.

In 2015 Hussein and his family arrived in Sudbury, Ontario as part of Citizenship and Immigration Canada’s Private Sponsorship of Refugees Program. Hussein, along with his wife Sawsan and their three boys, Mohammad, Ousama, and Nabil were sponsored by St. Andrew’s United Church. His father Mohammad joined the family one month later and their fourth son Omar was born in 2016, a Canadian citizen.

Hussein is one of seventeen writers from across northern Ontario who have contributed to 150 Years Up North And More, an anthology of creative non-fiction stories marking Canada’s sesquicentennial.

Two years ago, Hussein couldn’t speak a word of English. Come the end of March, he will be a published writer.

As a regional publisher dedicated to northern Ontario authors and literature, for this particular project, we were interested in stories of colonization and resilience from Indigenous storytellers and stories of immigration from generations ago and today from the region.

Our goal was to recognize the many experiences that have formed the diverse and multicultural part of Ontario; both the Anishinaabe who witnessed the influx of immigrants to their territory and the newcomers who helped shape the region. That meant making a call for submissions and approaching cultural groups and activists, asking them to connect us with members of their community willing to share a story. In the case of the Qarqouz family, it meant taking the time to ask questions and listen; transcribing our conversation and then editing Hussein’s story, moving thoughts and memories around to form one flowing narrative.

Karen McCauley joined me as editor. Karen is a writer based in Sudbury and teaches social work at Laurentian University where she uses narrative and literary techniques to teach contemporary issues in social work practice. Karen was also a contributing author to our first short story anthology, Along the 46th.

There were some stories that spoke to my own experience as the daughter of an immigrant father—one author even travelled aboard the same ship as my father, arriving at Pier 21 in Halifax, Nova Scotia.  But as editors we required additional expertise—and perhaps the lived experience—to address experiences of colonial oppression and resilience.

William Morin, a visual artist, educator, cultural consultant, and member of Michipicoten First Nation writes about identity and oppression in Identity Confusion. His story weaves English with Anishinaabemowin, with a narrative that challenged our editorial competency.

To provide feedback to the writers whose stories contained Indigenous perspectives, we brought on author and journalist Waubgeshig Rice as Indigenous editorial advisor and sought feedback from community members knowledgeable in the Anishinaabemowin - Ojibway language.

It took a team of editors and writers to bring the experiences of 150 Years Up North And More to life. It will take many more readers to keep the stories alive.

Thanks to Laura Stradiotto for sharing the story behind 150 Years Up North and More with us. For more Under the Cover, click here. 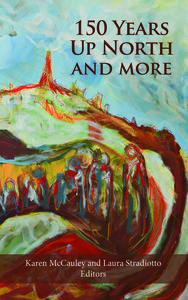 150 Years Up North and More

January 9, 2017
Beautiful Books: Enjoy It While It Hurts by JonArno Lawson