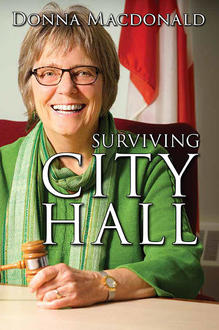 As a former city councillor and newspaper columnist in Nelson, BC, Donna Macdonald spent 19 years in and around city politics. Here, she shares the story behind writing her memoir: how decades of experience and insight resulted in a book infused with passion for local government in  Surviving City Hall (Nightwood Editions).

I knew I had to stop. I also knew I couldn’t quite let go.  And so I did both.

Most of my adult life was engaged with local politics. I served on city council in Nelson, BC for 19 years. In between terms, I was a newspaper columnist and council observer. Twenty-six years, all told. And then it was 2014 and I had a dilemma. I really wanted to do something else in what’s left of my life. And, yet, I’d learned and experienced so much; I was at the top of my game; local government is so important; how could I just quit? 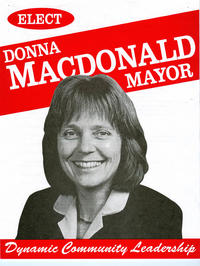 I realized that by writing a book about it all—sharing stories, reflections and a bit of advice—I could happily resolve my dilemma. I’d produce an insider’s view of City Hall, for citizens and would-be politicians, a book infused with my passion for local government. And then I’d retire to my rocking chair to read other people’s books. Decision made.

Over the previous ten years, I’d begun assembling pieces of writing, very intermittently. And now the messy manuscript was before me, taunting me: time to get this done. Luckily I’m an organized hoarder, and double-luckily most of my career was spent in the Age of Paper. So, along with the memories in my head, I had files and files of hot topics, hard decisions, staff reports, media coverage, and other relics to support my writing (and revising).

Years before I’d wondered how to tell the story of those 19 years, knowing I didn’t want the chronological format of many memoirs. I was in a writing course and we were asked to write a job description for some job we’d had or would like to have. And so I asked the question: What does a city councillor really do? And, more than that, what does she think and worry about, celebrate or mourn, enjoy or struggle with, accomplish or fail at?

Bingo. That became my book’s structure. Each chapter begins with a brief answer to that question, providing a theme that is elaborated throughout the chapter. The structure allowed for creative blending of stories with information and perspectives for readers to ponder, allowing all the currents and voices of a deep experience to be present.

Readers are often surprised to find there’s quite a lot of humour in my book, like the story of the time I was dismissed as a "cigarette-smoking carnivore" by my favourite mayor. There’s also drama and angst, like the sexual harassment case, or the labour lock-out, or the barbs embedded in my skin. There’s contemplation, wondering where all the women are, or how citizens can engage productively with council. My book is all about the human struggles of government and of community.

In the final year of the book’s preparation, I worried a lot. Nelson is a small city of 10,000 people. I know lots of people. Even more know me. I was okay with telling stories about me, my personal "moments" so to speak, from the frustration of being marginalized to angry outbursts (and even bad language!). I was okay owning up to my own warts. 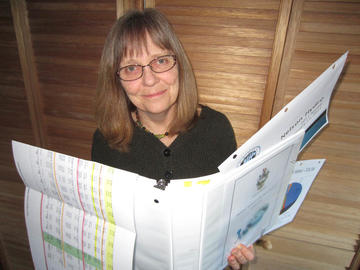 But other people’s? There were some juicy stories tucked in my files. I told some of them in initial drafts of my book. Early readers loved those stories; they were so shocking and entertaining. So, for that reason, I wanted to include them. But my gut was yelling: no, no, no. Partly out of self-preservation; spending time in court for defamation is not my idea of a happy career change. Partly out of simple human decency—was it really necessary to drag up that old scandal and ruin someone’s last years on this earth? And partly because one of the key themes in my book is the need for more civility in our politics, more respect, more kindness. What a hypocrite I would be to not model that in my book.

I particularly struggled with the sections about working with five different mayors. To avoid naming them, I first considered fictionalizing the whole book. Next I tried changing their names to protect them (or me!).  I talked to a lawyer, my agent, and other writers. I fussed a lot. Finally my publisher/editor Silas White said: Donna, this is a memoir, you need to use real names, and you need to honour the tone of your book.

That good advice cleared my way forward so I could talk about those men (the mayors), looking at them as leaders and considering how their leadership styles impacted me, city council, and the community. And to do that with honesty, and also with fairness and respect, separating the political from the personal.

When I wrote for a newspaper, I always tried to get at the whole truth, all the sides that reveal it. I had to learn that this book was my story, my truth, my experience. I didn’t always need to write with balance, but I did need to write with integrity.  A certain sick feeling alerted me when I missed the mark.

To write a book, to stick with it, you need to believe it’s a story that needs telling. That was always clear to me because so few books are written about local government, and yet it affects us every moment of the day. I learned to tell stories not for the sake of them—a laugh, a groan, a gasp—but to glean meaning from them, to understand what they say about how we try to live in community.

That’s the whole point really. Good stories entertain us, and also change us and move us. And I wanted to move readers from disinterest in or hostility toward their local government, to curiosity, appreciation, and even kindness toward politicians. And each other.

As to my rocking chair, it’s not yet being fully occupied. 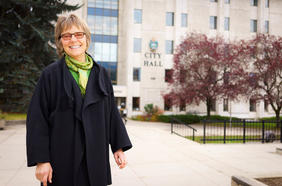 Donna Macdonald served on the Nelson, BC, city council for nineteen years. She spearheaded many projects including cultural development, affordable housing, recreation facilities and action on climate change. She was also a leader of the Osprey Community Foundation and the Nelson CARES Society. She has been involved with library boards for several years and is currently president of the BC Library Trustees Association. In 2015, she received a BC Community Achievement Award.

Thanks so much to Donna for sharing the story behind Surviving City Hall, and thanks to Nathaniel at Nightwood Editions for making the connection. For more behind-the-scenes looks at your fave independently published books, click here. 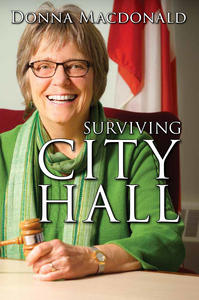