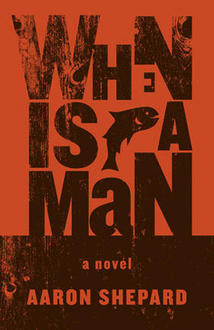 Under the Cover: When is a Man

The Movember movement isn’t just about awareness of prostate cancer, but of testicular cancer and men’s mental health as well. Most importantly, it is about communication, about starting difficult conversations and removing stigmas, so that we can live healthy lives and have fulfilling relationships with our partners, families, and friends. If I learned anything during the writing of When is a Man, it’s that our best relationships transcend our everyday notions about the word “normal.”

See more details below
Tagged: Movember, When is a Man, Aaron Shepard, Brindle & Glass, Under the Cover

In the last few years you can't even talk about November without someone mentioning Movember. And with good reason--prostate and testicular cancer affects thousands of men, as well as their families, every year. Author Aaron Shepard shines a spotlight on the effects of prostate cancer in his new novel from Brindle & Glass, When is a Man. In honour of Movember Aaron was kind enough to share a bit about what he learned in the process.

In When is a Man, Paul Rasmussen is a mid-30’s ethnographer and academic recovering from a prostatectomy. Being relatively young and healthy, it’s clear throughout the book that his life, while initially at risk, isn’t on the line. Instead, much of the tension arises from his suffering from the two most common side effects of prostate cancer treatments: incontinence and impotence.

While you can probably imagine all the satirical fun to be had from Paul’s situation (Martin Amis once likened impotence to trying to shove a raw oyster into a parking metre), I decided to do something few novelists had done before and actually take these issues more seriously – at least most of the time. For Paul, the most difficult part of his journey is summoning the will to embrace a new life and the possibility of a sexual relationship with a woman he meets, rather than retreating into himself.

It is tempting to say that When is a Man was largely written to draw attention to the most common cancer among Canadian men, and to foster empathy and understanding for the men suffering or recovering from treatment. The truth is, Paul’s illness began as an act of petty theft.

I had only two certainties when I began writing the novel. The story would take place in a valley that had been flooded. And, I needed an image of personal, essential change, something that could echo and match the sense of displacement the valley’s inhabitants still felt long after their relocation. Prostate cancer was a perfect fit.

Imagine that the valley where you live was flooded to create a reservoir for a hydroelectric dam. The farmland, wetlands, and villages that hugged the river’s edge have vanished under water. You were forced to move your house, or maybe, like your neighbours, you burnt your house down in an act of disgust and surrender. You live uphill now – rather, the place you once thought of as being uphill. You’re in the same valley, but it’s a different place. All the angles have changed. Your past, your old way of being, is submerged.

The same scene has played out in countless valleys, along countless rivers. It’s happened to millions of people around the world. It’ll soon happen again in northern BC if they build the Site C dam.

Displacement, relocation – I know, I know, they’re CanLit clichés. Talk of displacement makes book critics gnash their teeth. Why do writers keep coming back to these themes? Displacement is part of our history, perhaps a fundamental part of being human. You could argue that running from major crises helped us populate the globe. As individuals, though, we are also deeply protective of our own identities, even more so than our sense of place. We remain morbidly curious about things that could threaten the foundation of who we are. Displacement is the loss of self writ large.

Impotence, incontinence, infertility. We often crack wise, and not altogether untruthfully, about a man’s reason for living residing between his legs. Prostate cancer puts a cruel twist on the joke: treatment can save a man’s life, but it might cost him the ability to have sex. Infertility is also a likely outcome, and certain if the prostate is removed. Every cancer survivor is a changed person, but for many men, prostate cancer strikes at the heart of their manhood. It leaves them exposed and vulnerable, filled with shame, embarrassment, or even the fear their partner will leave them. As the Movember website states so eloquently, prostate cancer isn’t just a men’s disease – it’s a couple’s disease.

Much of my research made for difficult reading – explicit descriptions of symptoms and surgeries, testimonials of despair and loneliness. But I also read inspiring stories about couples adapting to the challenges of post-treatment side effects. I was amazed at the compassion that women and men showed as they accepted limitations and reinvented not just their sex lives, but their very definitions of masculinity, sexuality, and intimacy – doing whatever it took to ensure that love would endure and thrive.

The good news is that many prostate cancer survivors will recover their potency within a year or two. Even then, things are never quite the same. As my protagonist Paul tells himself, “his body was a living ledger of successes and failures that would never balance but keep him staggering along with a knocked-about sense of what was normal.”

The Movember movement isn’t just about awareness of prostate cancer, but of testicular cancer and men’s mental health as well. Most importantly, it is about communication, about starting difficult conversations and removing stigmas, so that we can live healthy lives and have fulfilling relationships with our partners, families, and friends. If I learned anything during the writing of When is a Man, it’s that our best relationships transcend our everyday notions about the word “normal.”

A former musician and forestry worker, Aaron Shepard lives and writes in Victoria, BC. He grows a terrible moustache. When is a Man (Brindle and Glass, 2014) is his debut novel.

Thank you Aaron and Brindle & Glass for sharing this story with us. If you want to learn more about Movember check out the Movember Canada website. 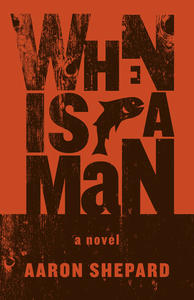 When is a Man

November 3, 2014
First Fiction Fridays: When is a Man by Aaron Shepard