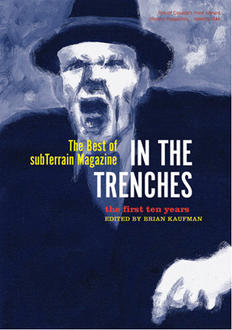 Under the Cover: In the Trenches with subTerrain for Freedom to Read Week

Organized by the Freedom of Expression Committee of the Book and Periodical Council, Freedom to Read Week is meant to "encourage Canadians to think about and reaffirm their commitment to intellectual freedom, which is guaranteed them under the Charter of Rights and Freedoms." subTerrain Magazine has been publishing provocative and bold art and writing for decades. This spring Anvil Press is releasing the long awaited In the Trenches: The Best of subTerrain Magazine, edited by Brian Kaufman. Brian sat down for a conversation between long-time subTerrain collective member, Jim Oaten, to discuss the current state of freedom of expression in Canada. 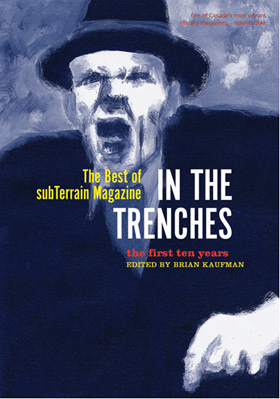 In Canada we are fairly lucky to live in a country where, for the most part, we feel safe in expressing our opinions. However, that doesn’t mean there aren’t instances and occasions where this right to intellectual freedom is challenged. That’s why Freedom to Read Week is so important.

February 23rd to March 1st of this year is the 30th year of Freedom to Read Week in Canada. Organized by the Freedom of Expression Committee of the Book and Periodical Council, Freedom to Read Week is meant to “encourage Canadians to think about and reaffirm their commitment to intellectual freedom, which is guaranteed them under the Charter of Rights and Freedoms.”

subTerrain Magazine has been publishing provocative and bold art and writing for decades, which should come as no surprise given that their tagline is “strong words for a polite nation.” This spring Anvil Press is releasing the long awaited In the Trenches: The Best of subTerrain Magazine, edited by Brian Kaufman.

Brian sat down for a conversation between long-time subTerrain collective member, Jim Oaten, to discuss the impending release of the long-awaited and much protracted best of subTerrain anthology and the current state of freedom of expression in Canada just in time for Freedom to Read Week.

Jim Oaten: Hi Brian. So it's true? In the Trenches is really coming out this year? Seems to me that the anthology's been on the precipice of publication for years now: oft announced, but never actually hitting the bookshelves, a bit like a homegrown version of Harlan Ellison's legendary Last Dangerous Visions.

Brian Kaufman: Yes, it is definite. As definite as things get; slightly more definite than a Harlan Ellison promise … oh, maybe scratch that … he’s apparently a bit cranky and litigious. I need a lawsuit like a hole in the ass of my pants … or a drill in my tooth … or like an anthology constantly on the verge of happening. I dug into the archives (though, not too deeply, lest I get all nostalgic and begin to weep) … the anthology was first announced in Anvil’s Fall 1998 catalogue, which makes sense, as the anthology was originally meant to celebrate the first 10 years of the magazine. And at least Ellison got out the first two volumes … so give him a break. Seems to have been relentlessly harassed for not following through on the third volume (The Last Dangerous Visions) … Christ, maybe he just didn’t feel like doing it. So we’re celebrating the sixteenth year of the non-birth of In the Trenches. That ain’t so bad…

JO: To me, the comparison is a particularly apt one as Ellison's Dangerous Visions books were meant to kick down doors and provide a home to controversial material traditionally ignored in the notoriously conservative field of speculative fiction, particularly stories that were explicitly sexual or violent or simply progressive and stylistically experimental. Was the impetus to create subTerrain similar? Were there barriers in Can Lit that prevented particular types of stories from being published at the time? 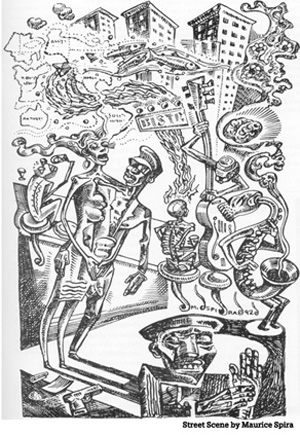 BK: Somewhat, I suppose. I did want material that would make the reader sit up and take notice. Or be “shocked” … we’ve been accused of that, publishing something simply to shock. But I’ve never felt that that was the objective; and I think for us it was always the writing first – great story, great voice, great style, great character – something great had to be going on. We didn’t want to be boring, snoozy, stuffy, staid. I don’t think anyone sets out to write a limp, deflated piece of fiction but, frankly, there is enough of it to fill the Grand Canyon.

But as far as barriers that have prevented certain types of material from being published in CanLit (outside of hate literature), I think those barriers have been imposed by timid editors who are afraid of offending their subscribers – or potential subscribers. We’ve lost a few subscribers over the years due to our content, one just recently, actually. This subscriber emailed to tell us that.

JO: Now that we live in an age where access to almost every aberration imaginable is pretty much just a mouse click away, is there still such a thing as "risky" or "taboo" literature?

BK: I don’t think so. Maybe stories of incest, pedophilia … suicide? But it’s all out there, available to those who want to explore any particular sub-genre. There will always be honour in kicking against the grain, against the powers that would prefer we were tax-paying, mute, clone consumers who never open their mouths to bitch about a thing. But “taboo”? Every taboo has been fetishized. No one gets outraged anymore … it’s all desensitized … people just turn their eyes away, block the site, put up their parental controls … but you’re right, what does that mean for art that is trying to bust down the doors? Which doors now? So, as I said earlier, there has to be more going for the story or the poem than just risky subject matter or shock value.

JO: After twenty-six years in the trenches of literary publishing, and with Freedom to Read Week coming up, what's your take on the current state of free expression, both here in Canada and abroad?

BK: We think everything is fine and safe here in Canada … but witness the recent attacks on Pussy Riot, the feminist punk rockers in Russia. What we would call legitimate rights to protest and voice an opinion gets you whipped by Cossacks and thrown in jail. Here in Canada, most people believe this could never happen. Don’t doubt it. Remember the APEC protests in Vancouver in 1997? Sgt. Pepper? Abominable behaviour on the part of the cops. Inexcusable, and you wouldn’t think this sort of shit could happen in healthy democracies … but there you go. We get examples of abuses of power on a daily basis.

JO: Of course, privacy is one of the great – and many – advantages that books and magazines confer … the ability to read without the too real spectre of constant surveillance, of stealthy eyes peeking over your shoulder. Not that books aren't under pressure too, I mean just take a look at the list of writers and books facing challenges in Canadian libraries, there's a lot of national icons on that list: Margaret Atwood, Alice Munro, Timothy Findley … hard to believe that people still want to ban books and magazines in 2014. 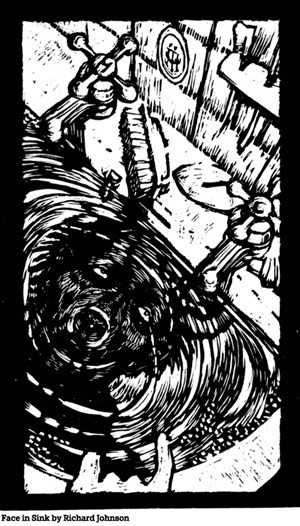 BK: Yes, there are still schools trying to have Atwood’s The Handmaid’s Tale removed from reading lists; there is a movement afoot to ban productions of The Merchant of Venice. Don’t people realize that these texts form the perfect departure point from which to engage in discourse about the very subjects that they find so abhorrent in these texts? Like anti-Semitism and violence against women? It is fear behind this … don’t we want to pull back the curtain and reveal the truth? I guess not … this pig-headed attitude is as old as civilization and hardly bears mentioning…

_______
Edited from the original post, published on the LPG blog