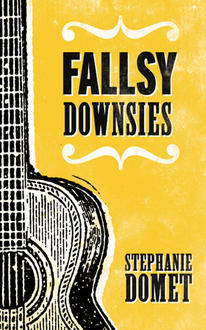 Under the Cover: Who is Lansing Meadows?

Fallsy Downsies by Stephanie Doment, published by Invisible Publishing, is about aging rocker Lansing Meadows and his last road tour. Stephanie herself is about to hit the road, touring the book through southern Ontario from November 29th - December 4th. Before Stephanie hits the road, she is sharing with us this piece about who Lansing Meadows really is.

Back in 2009 when I started at the LPG, one of the first books I read by any of our publishers was Homing by Stephanie Domet from Invisible Publishing. It was a little quirky but sweet (not to mention, it looked good on my bookshelf) and left me with a really good feeling about my new job. It got me really excited to be working with such interesting and different literature. And almost 5 years later, the job is just as interesting and Stephanie's back with a new novel!

Fallsy Downsies is about aging rocker Lansing Meadows and his last road tour. Stephanie herself is about to hit the road, touring the book through southern Ontario from November 29th - December 4th. (To find out where she's visiting you can check out her website or her publisher, Invisible Publishing's website).

Before Stephanie hits the road, she is sharing with us this piece about who Lansing Meadows really is. 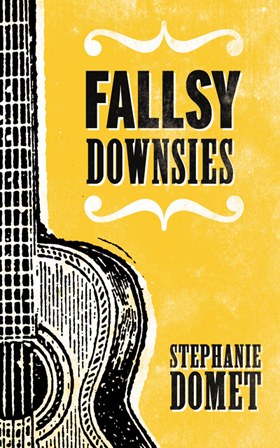 Who is Lansing Meadows. It’s what they all want to know. Eventually every Q&A session gets there. Who is he?

And I could tell them that Lansing is the godfather of Canadian folk music, fifty-nine years old and still at it. A kid from Windsor Junction, Nova Scotia. Father of one – that he knows of. The songwriter behind the monster hit On My Honour. Not a household name, the way he should be, but those who like him, like him a lot.

But that’s not what they mean when they say Who is Lansing Meadows. They mean, Who is he, in real life? Whose soul did I steal with my writer’s eye?
The truth about Lansing Meadows is that the first inspiration for him was Britney Spears.

At first blush, they don’t have much in common, the young pop superstar and the grizzled semi-obscure troubadour. But when Britney started to crack up (the first time), I found myself thinking about the nature of fame, the price it requires, and the way we are with our celebrities. What we require of them, the trade off between privacy and primacy. And I thought about what her life would be like if the culture didn’t allow her to get back to work doing what she wants to do – making music. This led me to consider what it’s like for one-hit wonders – how do you carry on when your subsequent creative output is reduced to a pop culture punch-line at best, and offered to the backs of a crowd that’s moved on to the next big thing at worst? This got me thinking about aging and art, and the challenges of that in a youth-obsessed culture.

It wasn’t long after that Lansing Meadows knocked at the door.

He came to me first as a cranky, crusty, over the hill former folk star. Someone who knows his fame is fading and his skills along with it, and so he latches on to younger performers, offering to co-write with them songs they’ve already practically finished themselves. Still imperious and intimidating enough to be able to bully them into driving him everywhere, changing the strings on his guitar, buying him a beer in the pub. He arrived all bluster and big talk. That ever-present hat he uses like a weapon. But the more time I spent with him, and the more I observed of the real-life aging folk stars I encountered (with a musician husband and a job at the CBC, I have more access to real-life aging folk stars than one person really should), the more Lansing deepened and complexified in my writing. The more alive he became, the more, I knew, readers would want to know who he was.

The answer for me is, he is himself. Made in my imagination, out of scraps and bits I’ve collected my whole life. But I knew there would be questions. (After Homing, my first book, came out, even a writer friend, who should have known better, asked which character was him. “I see Tom and Andy,” he said, naming two of our mutual friends, “but I don’t see me!” None of the characters in Homing were based on the guys he mentioned, but the desire and tendency to see oneself reflected exactly in the work of writers one knows well is powerful.) And I wanted Lansing to have a fighting chance at just being himself.

So I thought of this country’s aging folk stars. Murray McLachlan. Gordon Lightfoot. Ron Hynes, especially because he’s from the east coast, where I live and write. Stompin’ Tom Connors. I had to meet the question head-on, in the pages of the book. I began to name-drop.

Here’s Murray McLachlan as Lansing’s foil in remembered scene in Yorkville in the sixties. Here’s Gordon Lightfoot in a scrap of lyric that comes to Dacey Brown’s mind as she gazes out over a stormy Lake Superior. Here’s Ron Hynes co-writing No Change in Me with McLachlan. Here’s Stompin’ Tom playing the Horseshoe Tavern to an audience that wants nothing more than to sing along with every word and applaud raucously at every song.

It felt daring at first, and dangerous. An intensification of the work you’re already doing as a writer, taking the bits and scraps, borrowed gestures and phrases you’ve overheard on the street, weaving those into story and character and setting and dialogue, making a world that’s like the one in which you live, though not entirely alike. But to populate that world of fictional characters and re-imagined places with real people, especially ones already well-known in their own right, that felt risky. Even now, I realize that Murray McLachlan may some day somehow read this book and stumble across himself as seen through the eyes of Lansing Meadows (spoiler alert: Lansing’s not a fan) and wonder what I have against him (nothing; the time we met he was perfectly polite.). But at least he won’t wonder whether he’s Lansing Meadows.

When my husband read Homing he said, “Is that what you think of me?” He was referencing Henry, a struggling musician who is very much is own worst antagonist. Henry can’t get his shit together, makes resolutions to be better, to do better, and forgets them almost instantly. Henry is in a constant state of shambles. “Don’t be ridiculous,” I said. “Henry may look a little like you, but inside, he’s all me.” I’ve never actually had to freshen up a pair of socks enough to wear them by turning a hair dryer on them, as Henry does, but obviously, it has occurred to me to do so.

Does Lansing have things in common with Hynes? With Lightfoot and Connors, with McLachlan?  I hope so. I hope I was able to capture some of what any aging folk star might contemplate or face. But in the end, there’s only one answer to the question who is Lansing Meadows.

Thank you, Stephanie, for sharing this insider's view of Lansing Meadows with us!

February 27, 2014
Beautiful Books: Enjoy It While It Hurts by JonArno Lawson