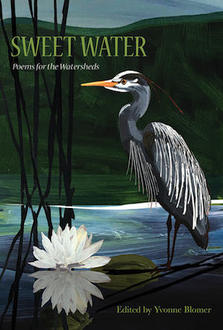 In recognition of World Water Day (March 22, 2020) we're bringing you two poems from the collection Sweet Water: Poems for the Watersheds (Caitlin Press), the second in a trilogy, edited by Yvonne Blomer. Below, Yvonne shares more about our connection to water as an essential resource to our survival and her call to poets for submission of short prose ecologies on the water-filled places that inspire them most.

Sweet Water: Poems for the Watersheds is the second in a trilogy of water-based poetry anthologies I’m editing for Caitlin Press. The project began during my years as the City of Victoria’s poet laureate (2015–2018). I wanted to focus my time as a poet in that public role on the plight of the Pacific Ocean. The first book, Refugium: Poems for the Pacific, was published in 2017. I think readers, poets and environmentalists were ready for such a gathering of voices which spoke to connection and concern for the Pacific. The third and final book in the trilogy will be on the Atlantic Ocean.

As Refugium came out, suddenly we were at the beginning of the Site C damn in BC, summer fires were becoming the norm, friends were writing about trees and cities and the daylighting of local river systems and lost species so fresh water was on my mind. All our watersheds run into one ocean or the other, so the connection is profound. Poets across Canada are deeply knowledgeable about the natural places they live.

In order to deepen this collection and ground the poems, I invited poets to write short prose ecologies on the places that inspired the poems. Poets seem as intertwined across North America as the river systems, forests and cities that feed, nurture and connect us. It is true that water is life. It is also true that literature can feed us, can draw our eye to that which has been hidden – say a stream or a river once abundant with fish and birds.

Someone must have figured
they were too good to throw away,
so for the past sixty years or so,
my family has stored
the cabin’s drinking water
in two repurposed, galvanized steel pails
still bearing the stickers from their previous life:
SOLVIT: Professional Rat and Mouse Killer

“Well, those were rinsed out, believe me,”
my grandmother said
when my five-year-old son—
hyperlexic, early to read, at eye-level with the water pails—
finally noticed

so we continue to strain
the algae-thick lake water
through an old bedsheet
and into the pest control buckets,
somehow maintaining faith
that the decades-old fabric
is filtering out the algal blooms,
the creosote from the recycled, railroad tie dock,
the acid rain and the local paper mill effluent,
the petrol rainbows leaking from motorboats,
and the piss and shit of all god’s creatures
in the nearby swamp

the living water,
my uncle proclaims proudly, defiantly,
as if purified water
was only for sissies,
and impurity and pollution
somehow nutritious

and it’s true that no one’s gotten seriously ill

and you can’t help but notice
that that side of the family’s
pretty goddamned weird.

Joe Zucchiatti on “Parts Per Billion”: In the late 1940s, early 1950s, my grandfather and great grandfather built a rough-hewn cabin with no road access on Rainy Lake, just outside Fort Frances, Ontario, right next to a railroad track and a swamp. To a young boy visiting there in the summer, it was as idyllic as it gets. I visit there most every summer with my family, and the place still teems with swampy magic: the birds sing the same pretty songs as they did when I was a kid; the frog chorus at night; fireflies; garter snakes; leeches; mud turtles; cicadas—forget it. But it seems to me that there are fewer of these creatures than when I was a kid: getting a leech on your skin is a special occasion rather than a daily occurrence, and the fish are now so scarce, my family will even eat Northern Pike, which they’d previously scorned as a trash fish. My dad and uncles still drink the lightly filtered lake water, which is slightly yellow and tastes of swamp. They think I’m a wimp for drinking bottled water, but I don’t like having diarrhea enough to volunteer for it.

Joe Zucchiatti lives in Whitehorse, where he writes poetry and prose, helps manage the local liquor store, and practices increasingly goofy manoeuvres at the local skate- park, where he volunteers as an advocate and custodian. His writing has appeared in Refugium, subTerrain and Arc, among other magazines and anthologies.

Solveig Adair on “grandmother river”: At the juncture of the Kalum and Skeena Rivers, on the unceded territory of the Tsimshian people, there is a small boat launch that touches both sets of waters. There is another river that joins the Skeena slightly upriver and the Skeena swells and spills with the joinings. Living at the edge of the river, cycles of water, of life and death, are as keenly felt as the pulse beneath our own skins. My grandmother taught me this and, shortly before her death, asked me to help bring her to the water that was such an integral part of her own history. Rivers are about connection. I have never forgotten my grandmother making her peace through her ties to the land and the water. This poem was born from the river that connected us, the pulse of arteries that drew us back again and again.

Solveig Adair is a college instructor and writer who loves the North in all its forms and complexities. She has been published in several literary journals and anthologies including filling Station and Beyond Forgetting: Celebrating 100 Years of Al Purdy from Harbour Publishing. Wherever she has lived and traveled, the waters of the North have always called her home.

Yvonne Blomer is the author of a travel memoir SUGAR RIDE: CYCLING FROM HANOI TO KUALA LUMPUR, and three books of poetry, as well as an editor, teacher and mentor in poetry and memoir. She served as the city of Victoria poet laureate from 2015-2018. In 2018 Yvonne was the Artist-in-Residence at the Robert Bateman Centre and created RAVINE, MOUSE, A BIRD'S BEAK, a chapbook of ekphrastic ecological poetry in response to Bateman's art. In 2017 Yvonne edited the anthology REFUGIUM: POEMS FOR THE PACIFIC (Caitlin Press) with poets responding to their connection to the Pacific from the west coast of North America, and as far away as Japan and New Zealand. 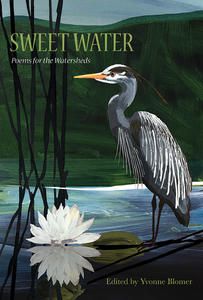 September 13, 2022
Under the Cover: Adoption and personal history in Atlas of Roots