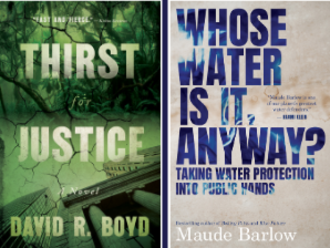 Read This, Then That: H20 Edition

This edition of Read This, Then That is courtesy of ECW Press who brings us two books for the social justice-minded reader. Follow-up David R. Boyd's political thriller  Thirst for Justice with Maude Barlow's call-to-action  Whose Water Is It, Anyway? for a well informed look at the inaction of global powers over humanitarian issues and the collective path to protecting our water.

See more details below
Tagged: thirst for justice, whose water is it anyway?, david r. boyd, read this then that, ecw press, maude barlow

Then That:  Whose Water Is It, Anyway? by Maude Barlow (ECW Press) 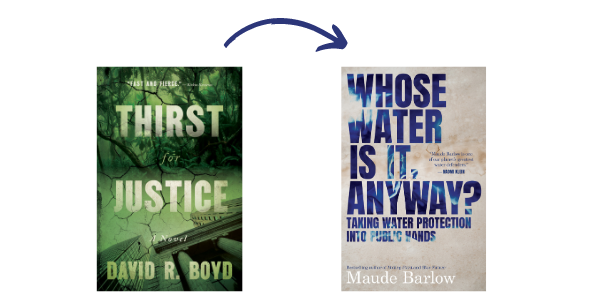 Thirst for Justice opens with the cholera-related death of a seven-year-old in a field hospital in Goma—the capital of the North Kivu province in the eastern Democratic Republic of the Congo. Michael MacDougall is a trauma surgeon volunteering in the city with a medical aid charity. Every day as patients flood into the hospital with preventable diseases, Michael becomes more determined to address the root of the problem: a lack of clean drinking water and latrines. Following a vicious attack by the Mai-Mai, Michael is forced to return to Seattle where he struggles with survivor’s guilt and the inequality he has witnessed. In an attempt to rectify the humanitarian crisis in Africa, he forms the Blue Drop Foundation. But when everyone from his wife and best friend to his local congressman doubts the Foundation’s viability, Michael drastically shifts gears and begins to plan an act of terrorism to shock his nation awake.

Anger can be an isolating emotion. When that anger is connected to a global crisis, the feeling of “we’re not doing enough” becomes overwhelming. Michael MacDougall feels alone in his urgency to remedy the crisis he witnessed in the Congo. Without a support network that understood his experiences, he becomes locked in a downward spiral.

Maude Barlow’s journey also begins with anger, or as she phrases it “alarm bells” in her head and in her heart. When Maude discovered that water was being commodified in a proposed trade deal between Canada and the U.S., instead of isolating in her anger, she found a network of water defenders and started a social movement. Unlike Michael, both Maude and David R. Boyd, who is the UN Special Rapporteur on human rights and the environment, found community.

Thirst for Justice will spark anger at the inaction of global powers, inspire discussion on the ethics of political and ecological violence, and keep you turning the page to find out what happens to Michael. Whose Water Is It, Anyway? will then provide a realistic blueprint for communities to regain public control of their water resources, and even mitigate their water footprint in the global South. One thing is for sure: both books will undoubtedly make a water warrior out of you.

Thanks to Anita Ragunathan at ECW Press for sharing these literary comparisons with us! For more literary followups, check out previous editions of Read This, Then That  here.

May 19, 2021
Where in Canada: Travelling by Paintbrush through the Reserves in British Columbia