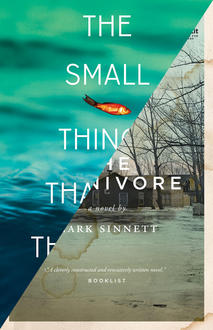 Dear reader, if you're an older-half millennial who grew up around Toronto, 1954's Hurricane Hazel was a mythic event that didn't stack up against our frequent, largely benign weather warnings. In both Jeanette Lynes'  The Small Things that End the World (Coteau Books) and Mark Sinnett's  The Carnivore (ECW Press), the destruction of Hazel is keenly felt: both during the catastrophe and in the decades that follow.

See more details below
Tagged: the small things that end the world, read this then that, the carnivore, mark sinnett, ecw press, jeanette lynes, coteau books

Read This:  The Small Things that End the World by Jeanette Lynes (Coteau Books)

Then That:  The Carnivore by Mark Sinnett (ECW Press)

If you're outside of the Greater Toronto Area and had never heard of Hurricane Hazel before, it was the deadliest hurricane in the Atlantic in 1954. Hazel killed 400 people in Haiti before moving up North America and landing in Toronto, where a further 81 people lost their lives and 4000 their homes to flash flooding, high winds, fallen trees, and other accidents caused by the hurricane.

In Giller-nominated Jeanette Lynes' The Small Things that End the World, the novel opens in 1954 with a babysitter – Sadie Wilder – heading through stormy weather to the wealthier side of town to meet her first-time charges, the Bannister children. The Bannisters lived on the banks of the Humber River which (spoiler alert) swelled 80 feet beyond its usual width during the hurricane. Sadie's dreams of hard-earned babysitting money are quickly dashed when the house starts taking on water, and the split-second decisions she makes in the hours during and days following the disaster have ramifications that echo through the decades.

Likewise, Mark Sinnett's The Carnivore details the long consequences of a husband's actions on the night of the hurricane. Police Officer Ray Townes is hailed as a local hero after daring rescues of people trapped in houses along the Humber, but an encounter his pregnant wife Mary has on her hospital shift that same night casts a shadow over Ray's deeds. Fifty years later, Ray is dying and Mary is left with her own recollections and his small diary – kept secret – to piece together why he'd been out that night in the first place, and what had happened on the shores of the Don River.

Both books showcase how one's personal life is always a factor in decision-making, even in a crisis. They also do an incredible job at describing the sheer, devastating power of Hurricane Hazel – readers of either book will find themselves gasping for air.

Read on to find more about what unites and divides these stormy reads: 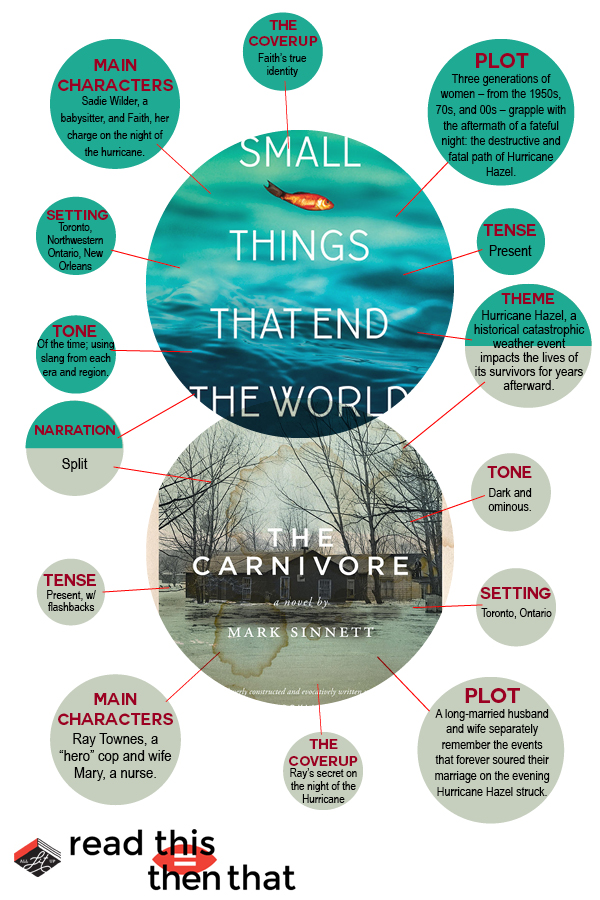 You can get both  The Small Things that End the World and  The Carnivore here on All Lit Up. For more Read This, then That, click here.

August 4, 2018
Under the Cover: Begun in Grief and Silence—The Writing of Bedlam Cowslip