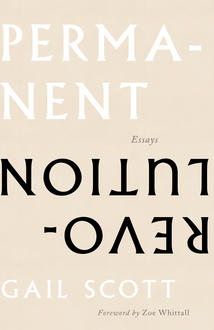 In her newest book  Permanent Revolution (Book*hug Press), prolific feminist writer Gail Scott collects new essays alongside revisited work from her groundbreaking text, Spaces Like Stairs. Engaging writers who contribute to current queer/feminist avant-garde spaces, this collection meditates on feminist art and provides a snapshot of Scott's ongoing prose experiment that hinges the matter of writing to ongoing social upheaval. Below, Scott tells us more about her work and the significance of two quotes from the book.

All Lit Up: Can you tell us a little about your collection Permanent Revolution?

Gail Scott: The book traces my trajectory of writing prose that steers away from conventional thinking on a variety of fronts in conjunction with ever evolving social issues. You can’t dream the present, not to mention the future, using the old devices, and forms. Two eras are tracked in parallel here: a selection of revisited essays hearkens to a glorious period of left-leaning social upheaval in '70s/'80s Québec. The essays were written alongside my work in La Théorie, un dimanche writing group (Nicole Brossard et al). The group interrogated our representation (as women) as writing subjects; we were not the women we saw in a lot of the canon. The era fostered for us an air of anything-is-possible that goes along, it seems to me, with revolutionary hope. You can see something similar going on today in the work of Black and Indigenous writers, among others. More contemporaneously, these essays trace the evolution of my prose writing innovations, sparked in part by travels to Paris, New York, and San Francisco. They accompany the writing of my more recent novels, unpacking issues like who speaks when one speaks. And because for me, writing always involves conversation, these essays are often about exchanges with other writers: queer New Narrative writers, and formally + political progressive poets on various sites other than Montréal.

ALU: There are two powerful quotes in your book that stand out: “A writer may do as she pleases with her epoch. Except ignore it” and “Where there is no emergency, there is likely no real experiment.” Can you explain the significance of these quotes?

GS: The first quote evolved in subsequent versions of the book, to finally read: “A writer can do as she wishes with her epoch. Rage accumulates.” The time of final writing coincided with the era of Black Lives Matter, of Indigenous movements, of youth political organizing around the survival of the planet, and of trans and left feminist resistance. I’ve noticed as have people of various diversities that we undeniably make progress in our struggles—but progress seems continually up for grabs in Western democracies. We have seen it with Civil Rights, with the question of the treatment of Indigenous children since contact despite endless declarations of concern and promise for change. Hence the title Permanent Revolution, with Revolution written upside down, to indicate how topsy-turvy our voyage is. The second quote is linked to the first: we have come, it seems to me, to living in a permanent state of emergency. If this is not extended to our creative work, so-called "innovative" art can have a nice neo-liberal sheen, but lack the energy to move thought’s goal posts. 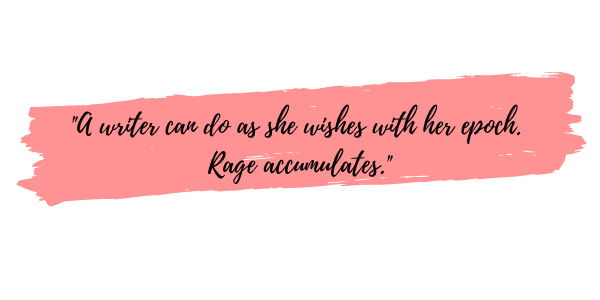 ALU: What, if any, quotes from other writers that have resonated with you over the years?

GS: Viktor Shklovsky’s: "If the line simply continues without being crossbred with the non-esthetic fact, there is no creation..." which I think sums up pretty well the links between radical writing and the street. 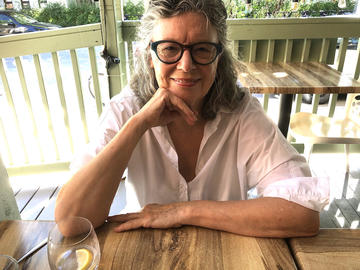 Gail Scott is the author of Spare Parts (1981), Heroine (1987, re-issued in 2019 with an introduction by Eileen Myles), Main Brides (1993), My Paris (1999), Spare Parts Plus Two (2002), and The Obituary (2010). Her essays are collected in Spaces Like Stairs (1989) and in La Théorie, un dimanche (1988) which was translated into English as Theory, A Sunday(2013). Scott is co-editor of the New Narrative anthology: Biting the Error: Writers Explore Narrative (2004). Her translation of Michael Delisle’s Le désarroi du matelot was shortlisted for a 2001 Governor General’s Literary Award. A memoir, based in Lower Manhattan during the early Obama years, is forthcoming. Scott lives in Montréal.