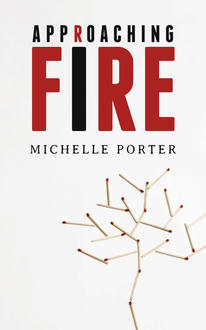 In  Approaching Fire (Breakwater Books), Red River Métis poet and journalist Michelle Porter combines musicology, jigs and reels, poetry, photographs and clippings, and the ecology of fire to create a portrait of her great-grandfather Métis fiddler Bob Goulet. Below, Michelle tells us the fascinating and storied past of the epigraph that begins her book: a newspaper ad from the 1930s for a live performance by her great-grandfather and his band The Red River Echoes.

I began my writing career in journalism, training in the daily business of the newspaper, the inverted pyramid-style story, the varying shapes of a feature story, the brief and follow-up and even design and layout. So it makes perfect sense that I would decide to turn to old newspaper archives to find traces of my great grandfather, and, by extension, echoes of my grandmother’s early life in Manitoba in the 1930s. They belonged to a well-known and prominent Métis family in Manitoba and they were musicians whose Métis band, The Red River Echoes, was well-known and in high demand for performances live in person and live on the radio. For both of these reasons, newspapers in Manitoba—and in British Columbia when they moved there—recorded more of their lives than many other Métis families during that time. And yet these are just traces, just old riverbeds where waters used to flow for my ancestors in Manitoba. In searching through old newspaper records, I am examining the imprint left behind, the riverbed that the river once flowed through before it jumped over to another river or another river bed, chose another way forward, and spread out into a number of braided streams.

The epigraphs I chose to include in Approaching Fire are so much more evocative for all they don’t say, all they hint at, for speaking so much but at such a low volume that I can’t quite catch all the words, make out the meanings. They reveal so much and at the same time they lead to more questions. The kind of questions that become haunting. In the book, I use these questions to create a conversation with my great-grandfather and to build a deeper relationship with him and the possibilities and limitations of his life. In this short piece, I’ll turn those questions in another direction. I’ll unfold a couple of layers that hide in the first epigraph in the book: a newspaper advertisement from the 1930s for a live performance by the acclaimed Métis fiddler, Bob Goulet, my great-grandfather, and his band The Red River Echoes. 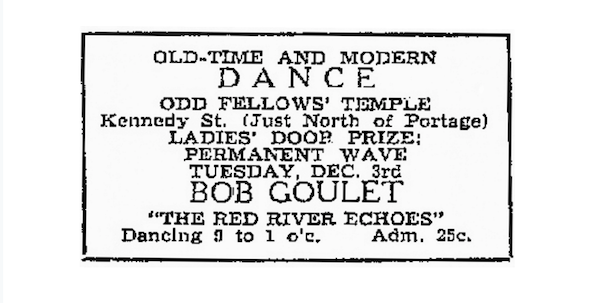 The classified ad appeared next to others ads for musical performances in the mid 1930s, some Métis music and some non-Métis music. This was a hard time to be a musician, but also a good way to get started because dancing and live music were a part of almost every event of any significance. People wanted to dance and they wanted music that made you want to dance. At least one of the Métis musicians whose ads appear next to Bob Goulet’s in the newspaper will later on become one of the best-known Métis musicians in the area, but this will happen after my great-grandfather has left Manitoba for British Columbia. The dance in this ad took place at the Odd Fellows’ Temple—now a preserved historic brick and stone building front in downtown Winnipeg’s shopping mall. The Odd Fellows’ society became important in some ways to the development of Winnipeg and the inclusion of Métis music there suggests a broad acceptance of old-time Métis music, even if the Métis themselves experienced racism and discrimination.

It’s the questions that are important. By tracing ads like this in newspapers, I was able to get a sense of the number of performances per week during my great-grand-father’s heyday. I could also compare the kind of coverage he received as compared to other bands and other Métis bands in particular. I asked what else was going on in his life when the announcement appeared in the radio listings that Bob Goulet had his own show slot. I could pick out the last advertisement that appeared in a Manitoba newspaper—in 1937—and pick up the trail again in BC, just a few years later.

This ad offers the name “BOB GOULET” and “THE RED RIVER ECHOES,” but does not mention the names of the girls and women he was performing with. Most of the time, the members of the Red River Echoes consisted of him, his wife Rose, his two daughters, who were children at the time, Olive and Estelle, and Bob’s sister Jule Goulet. At that time Bob was known for his skill with the fiddle and it was said that women didn’t learn the fiddle. But one of his daughters, Olive, did and her name would appear in advertisements for performances (with her father Bob, and alone) years later in BC. In this ad at this time though, it’s the “Ladies Door Prize” that makes mention of women, and the prize itself “Permanent Wave” becomes an evocative detail that tells not only of the popular hairdo at the time and it’s expense, but also tells of the broader societal changes that the Métis were a part of.

For me personally, these kinds of epigraphs made real all the stories my mom and aunties told growing up about our history. They become the means through which I asked questions and could have them answered, even if in a code I couldn’t completely understand. In some of these ads, I found stories that had slipped away from our family’s stories. In others, I found details that moved me deeply. I feel privileged to have been able to follow this trail: few families have so much documentation of their lives as what I found in the Manitoba newspapers in the 1930s. But most important to me was the way I could use them to reach out to my great-grandfather, to get to know him, to listen to the silences in the archives, to have a conversation with him and now, as I move on to research and writing about my grandmother, to converse with her, too.

Michelle Porter is a Red River Métis poet, journalist, and editor. She holds degrees in journalism, folklore, and geography (PhD). Her academic research and creative work have been focused on home, Métis mobility, and the changing nature of our relationship to land. She’s won awards for her work in poetry and journalism, and has been published in literary journals, newspapers, and magazines across the country. She lives in St. John’s.

Thanks so much to Michelle for sharing the considerations behind the epigraph that leads to Approaching Fire, and to Samantha at Breakwater Books for making the connection.

Approaching Fire is available for sale on All Lit Up. 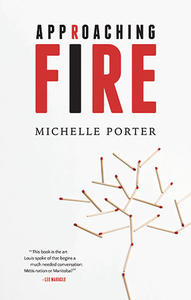