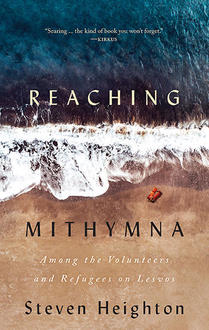 In 2015, Steven Heighton travelled to the frontlines of the Syrian refugee crisis in Greece to enlist as a volunteer.  Reaching Mithymna (Biblioasis) is his firsthand account of his experience working at an ad hoc transit camp and an engaged exploration of the borders that divide us and the ties that bind. Below, Steven shares the significance of a Leonard Cohen quote that begins his book: Every heart / Every heart / To love will come / But like a refugee.

Reaching Mithymna: Among the Volunteers and Refugees on Lesvos begins with these lines from Leonard Cohen’s song “Anthem,” on his 1992 album The Future. 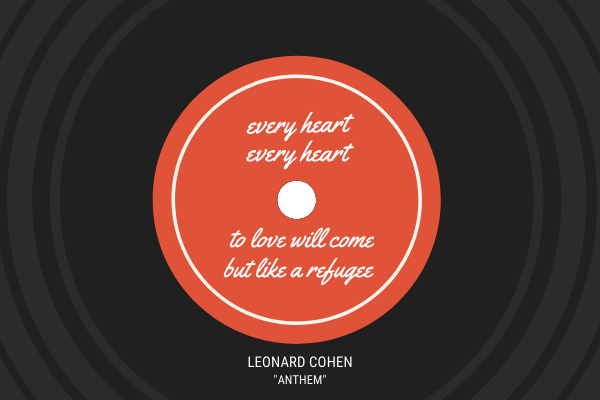 Like so many of Cohen’s lyrics, these ones induce in me a polarized response. The part of me that chose the lines as my epigraph agrees that if you come to a deeper, larger sort of love—inclusive, forgiving, less infatuatory and self-centred—you get there after being broken. Broken down, broken open, broken apart. If you arrive, you arrive homeless at heart, terrified, dispossessed spiritually if not materially.

A better word for that state might be grace.

You might think my other, negative reaction to the lines concerns Cohen’s analogy between broken-hearted folks and actual refugees, such as the Syrian war refugees who were and still are arriving homeless, broken, cold and hungry on the northern coast of Lesvos. In fact, I almost didn’t use the lines for that reason. But then I reflected on how Cohen specifies every heart—not merely the hearts of those with the privilege, say, to attend silent spiritual retreats, to study and meditate while being served three meals a day until they open the right chakra or achieve satori. Actual refugees, too, are on a parallel journey toward a larger, more inclusive love—the only kind that can change the world and thus mitigate situations like the crisis in question. To discount the spiritual vectors of  refugees—as if their physical hardship precludes any such higher aspirations—is an iteration of the old racist conceit that most non-Europeans, perceived as a vast, undifferentiated, suffering mass, are purely physical creatures.

Besides, refugees in their plight are already radically disillusioned, broken, their priorities reset, and thus less likely to waste time chasing illusions of pursuable happiness/love in their commodified contemporary forms.

Which brings me to my actual quarrel with these lines. Does one actually come to, or arrive at, love in the same way you reach a shore or border in hopes of refuge? I don’t think so. Love, like “happiness,” is not an external destination you reach but rather something you experience within, or at least collaborate in creating. You don’t glimpse it in the distance and paddle towards it in hope.

But Cohen, constrained by his song’s metre, may have needed to use that “will come” phrase. I suspect he would have agreed that the deeper, larger kind of love—referred to on that same album as “the only engine of survival”—instead arises when our impediments, projections and illusions, not to mention external oppressions, are removed. The way the burdened earth rebounds when an ice age ends and the ice-sheets recede. In other words, it’s not that the heart arrives at love, it’s that love arrives, emerges into, the heart.

Maybe love and even happiness are part of our molecular legacy, like the natural level of the unburdened earth. Maybe we spend years encumbered by others and by ourselves, and then—if we work hard, achieve the essential disillusionment, endure the necessary pain—we crack open and find what was always there.

Maybe actual refugees, fleeing forward in hopes of new lives, can inspire those of us who have roofs over our heads to make more room, share what we have, and thus at last find ourselves at home.

Steven Heighton has published fourteen books in various genres. He received the Governor General’s Award for Poetry for his 2016 collection The Waking Comes Late, has received four gold National Magazine Awards, and has published stories and poems in Granta, Tin House, Zoetrope, London Review of Books, Best American Mystery Stories, Best American Poetry, TLR, and five editions of Best Canadian Stories. His memoir Reaching Mithymna: Among the Volunteers and Refugees on Lesvos will appear this fall, as will a children's book drawing on the same events, The Stray and the Strangers. A third book, an essay called The Virtues of Disillusionment, will appear in October. Next year he will release an album of original songs with Wolfe Island Records and, with House of Anansi Press, a volume of new and selected poems.

Thanks so much to Steven for sharing the considerations behind the epigraph that leads to Reaching Mithymna, and to Chloe Moore at Biblioasis for making the connection.

Reaching Mithymna: Among the Volunteers and Refugees is available for sale on All Lit Up.

February 3, 2021 by Morgan Murray
In Review: The Week of September 7th