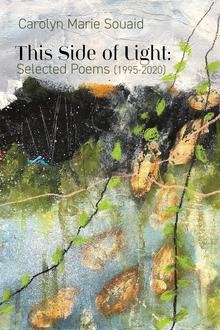 Poetry in Motion: Carolyn Marie Souaid + This Side of Light

For this edition of Poetry in Motion, award-winning poet and novelist Carolyn Marie Souaid introduces the breadth and depth of 25 years of writing poetry, encapsulated in a new anthology of her work,  This Side of Light (Signature Editions). Read more about Carolyn's "concept album" approach to collections and hear her read "Snow Formations" below.

This Side of Light: Selected Poems (1995-2020) showcases the evolution and scope of my work over a 25-year period. It also reminds me I’ve come a long way from being a kid who hated poetry in high school. Introduced by Governor General award-winning poet Arleen Paré and arranged chronologically, the poems collectively celebrate the everyday and the mysterious chaos that is us and our world. Selections offer readers a sampling of each book – structured around a particular idea, topic, or theme – and/or whet their appetite for more. I’ve always likened my poetry collections to the old “concept” albums produced by Genesis, Pink Floyd, and other progressive rock bands—with a kind of narrative thread running through them.

As an emerging writer in the 1990s and early 2000s, I gravitated to Mordecai Richler’s idea of being “a faithful witness to time and place,” my first, imagery-infused works focusing on the difficult bridging of worlds: how people from opposing realities (e.g. English/French; Indigenous/non-Indigenous; Arab/Jew) struggle to inhabit the same space despite the vast chasm that separates them. This theme was endlessly fascinating to me: the impossibility of truly connecting with the “Other.” Mid-career, my challenge was to try to understand the poem’s inner logic — not to push but to let it take me where it had to go; to make the best aesthetic decisions for the material poem. This process – problem-solving to map the subtle, surprising or previously unrecognized connections between things – became as interesting to me as the subject matter. My recent books evolved more organically as responses to my percolating angst around aging and mortality.

The title poem from my third book, Snow Formations, captures, in only a few short lines, some of the essential differences between Indigenous and non-Indigenous culture and philosophy.

Carolyn Marie Souaid reads "Snow Formations" from This Side of Light

Carolyn Marie Souaid is a Montreal-based writer, editor, and mixed media artist who has worked extensively to build bridges between linguistic and cultural communities in Quebec, including a decades-long involvement with the Inuit. Souaid is the author of multiple poetry collections and an award-winning novel. She has performed at literary events in Canada and abroad, her work garnering a top prize at the 2012 Berlin Zebra Poetry Film Festival and appearing on shortlists for the Pat Lowther Memorial Award and the A.M. Klein Prize for Poetry. She has contributed to the vitality of Canada’s English-language literary community through her work as editor, reviewer, adjudicator, workshop leader, and curator of literary events. Her literary papers (1967-2022) are housed at Rare Books and Special Collections of the McLennan Library of McGill University.