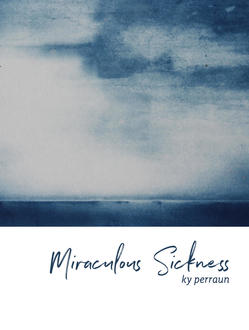 Shortlisted for the Stephan G. Stephansson Poetry Award, ky perraun's  Miraculous Sickness (At Bay Press) is a poetic history and contemporary critique of society's view and treatment of people with schizophrenia, and how far we have left to go. ky shares her hopes for enlightening readers about severe mental illness, and how poetry - in its defiance of form - is the perfect medium to express her experiences with schizophrenia.

Hello – I’m ky perraun.  Miraculous Sickness is my first full-length book. I would like to thank Matt and Alanna at At Bay Press for believing in my work, and All Lit Up for featuring me.

While I have been publishing poetry in periodicals, anthologies and chapbooks since 1983, there were years of silence due to my condition – chronic paranoid schizophrenia with clinical depression and anxiety.

I began experiencing symptoms of serious mental illness in 1985, but was not officially diagnosed until 1997, after involuntary commitment, and did not willingly accept treatment until 2000. Schizophrenia is a cyclical disease, with relapse and remission. I had periods of near normalcy, interspersed with episodes of psychosis and loss of functioning. My reluctance to seek medical intervention was due to loss of insight, self-stigma and fear. I had read The Snake Pit, and One Flew Over the Cuckoo’s Nest. And I was well aware of society’s view of the mentally ill.

Once I accepted my diagnosis, I began to read everything about schizophrenia that I could get my hands on, including the history of the treatment of the illness. This led to the composition of the poetry manuscript that became Miraculous Sickness.

While generally the treatment I have received has been exemplary for its compassion and strength-based focus, others throughout history and in the present day have not been so fortunate.  I wanted to present our stories to the public, in my genre of choice. It is my hope that Miraculous Sickness will provide insight into and empathy for the plight of the seriously mentally ill, whose voices, like mine was, are all too often silenced by circumstance.

We hear about the mentally ill in the news when an unfortunate incident of violence occurs, which is the exception. Sufferers of mental illness are more often the victims of violence, and not the perpetrators. I want us to be heard. I believe poetry is the perfect medium to convey the psychotic experience, with its surreallity, its ambiguity, its defiance of linear trajectories. Too, I wanted to create art out of tragedy, and to honour the creative practice that has proven so therapeutic in my recovery journey. I hope I have succeeded.

ky perraun is an Edmonton poet and writing group facilitator, who was diagnosed with schizophrenia in 1997. Having had her first poetry publication in 1983, while in journalism school, she continued submitting to magazines and anthologies throughout the decades, despite her diagnosis. In the early 2000s she helped form Right Heart Press, a micropress collective, which published her chapbook, Paging Dr.G.. In 2017 she received a Canada Council Cultivate Grant to produce a manuscript detailing schizophrenic treatments throughout history, which became Miraculous Sickness, released by At Bay Press in 2021.

Special thanks to ky for her reading and words about  Miraculous Sickness.

October 29, 2018
Where in Canada: Louis Althusser at Emma Lake