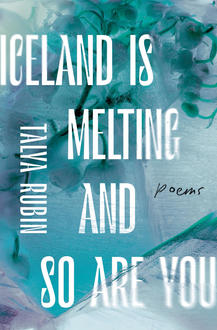 Poetry in Motion: Talya Rubin + Iceland is Melting and So Are You

Talya Rubin's  Iceland Is Melting and So Are You (Book*hug Press) explores the urgency of the climate emergency, surveying the natural world and the human interior in search of where they meet: a crossroads of geological time and human time, emergency and forgetfulness, fear and awe. Below, Book*hug Press shares insights from an interview with Talya, along with the book launch for the collection and some additional readings.

See more details below
Tagged: talya rubin, iceland is melting and so are you, climate change, poetry, poetry in motion, book*hug press, nature

In her recent interview on the Book*hug Blog, Talya Rubin writes, “It feels as though the human brain is in some way incapable of fathoming a lens wide enough to really take in geological time. Or if we can, it’s for a tiny glimpse and then the shutter closes again… I felt very deeply that climate grief was wrapped up with this immensity of time and space, with the layers of rock and ice. As a poet, maybe it is my work to try and hold a mirror up to the impossible. I had to breathe my way into the earth. To really attempt to feel the losses on a level far beyond the human.”

Rubin confronts the dichotomies of modern living, or as she puts it, “that rupture between what you know is right and what you do anyway.” The collection features imagery of long roads and twisting LA freeways, places where “our love of travel and ease of being able to move about is at direct odds with this knowledge that it is killing us.”

But mostly she writes out of a need to articulate feelings of grief and overwhelm. Iceland Is Melting and So Are You grants us permission to feel everything and to feel it deeply: “it is OK to grieve and to acknowledge what is really going on here, both inside and out,” says Rubin. “That is what will heal you and allow you to step out into the world and be a force for change.”

Virtual Book Launch: Iceland is Melting and So Are You

Talya Rubin is a Canadian poet originally from Montreal. She was awarded the RBC Bronwen Wallace Award for Emerging Writers from the Writers’ Trust of Canada in 1998. Her poetry has been longlisted for the CBC Poetry Prize and the Montreal International Poetry Prize. In 2015, she won the Battle of the Bards and was invited to read at the Toronto International Festival of Authors. Her first collection, Leaving the Island, was published in 2015. Talya holds an MFA in Creative Writing from the University of British Columbia. She also runs a theatre company called Too Close to the Sun, and currently lives in Perth, Australia with her husband and son.

Thanks so much to Rachel Gerry for sharing Iceland is Melting and So Are You with us in this edition of Poetry in Motion. 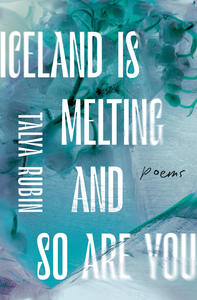 Iceland Is Melting and So Are You