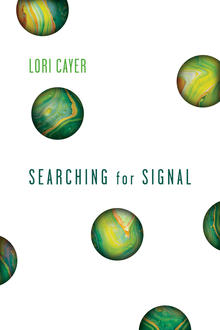 Lori Cayer's Searching for Signal (Signature Editions) witnesses her father's search for epiphanies about life in the three seasons leading up to his death. Cayer discusses more about how the language and the silences within her collection map the minutia of her father's personal journey—the circumstances of his dying and the aftermath of loss.

Searching for Signal is a long poem that bears witness to the quotidian, disorienting shifts of grief as my father makes his way toward his death over three seasons. This is mourning conducted in situ, the gift of observing one man quietly takes his leave and the impacted hole it leaves behind. The hunter, the gatherer who never stopped trying for epiphanies, me the daughter engaged in the same effort, frankly facing the span of a swift human lifetime that may pass without revelation or resolution. If there is redemption it is in bringing clarity to the physical condition of living and dying and the emotional intricacies of existence.

I wrote this book in two parts and two far apart times and interwove them into a third narrative. The language of the first part is fragmented, and the verse is full of breath-space, having come directly out of how my attention worked, or failed to work, as I moved with him through his experience; the silences are his private silences, alluding to family trauma, failure and shame. In retrospect it felt like I was transcribing the minutia but also writing from a bludgeoned frame of mind. To handle the weight of the memory, history and hearsay of the more recently written part I kept the language as spare as possible, to match the present-day poems. The circumstances of one man’s dying are the thread to pull the reader through to the aftermath of losing someone. The history/memory poems are the set-pieces of one family’s emigration, intergenerational poverty and struggles to thrive as Ukrainian-French-Canadians. It is also me learning how the world arrived at this poet with no second language but for poems.

Born in Saskatchewan, Lori Cayer has made Manitoba her home since the third grade. She is the author of five volumes of poetry: Searching for Signal (Signature Editions, 2021), Mrs Romanov (The Porcupine’s Quill, 2017), Dopamine Blunder (Tightrope Books, 2016), Attenuations of Force (Frontenac House, 2010) and Stealing Mercury (The Muses’ Company, 2004), which won the Eileen McTavish Sykes Award for Best First Book in Manitoba in 2004. In 2005 Lori won the John Hirsch Award for Most Promising Manitoba Writer. She is co-founder of the Lansdowne Prize for Poetry/Prix Lansdowne de poésie, part of the Manitoba Writing and Publishing Awards. By day Lori is a virtual editorial assistant for two scientific research journals.