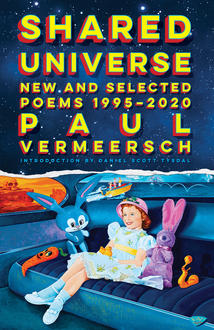 Paul Vermeersch’s poetry has always been fascinated with the question of what makes us human. From the human body to the human mind, from our place in society to our place in the cosmos, Vermeersch’s latest book Shared Universe: New & Selected Poems 1995-2020  (ECW Press) gathers together many of his poems that explore these questions in an exciting variety of ways. For example, the poems “Grendel’s Mothers” and “Required Modifications for the Transhuman” look closely at the vanishing boundaries between humanity and monstrosity. Read on for more about the collection, and to see a video of Paul reading these two poems!

It would be simple at first. Inanimate objects could be crossed off the list: chairs, rocks, cars, and socks. Not human.

Moving on to living things, we would eliminate those life forms the least like ourselves: protozoa, fungi, weeds, and worms are not human. June bugs and tuna are not human. The Jesus Christ lizard of South America, also known as the common basilisk, is not human. Dolly the cloned sheep is not human.

Okay, but when does the process of elimination begin to get difficult? Dogs and cats? No.

Is an ape that uses sign language a person but not a human? Are the words “person” and “human” synonymous, and if they aren’t, what’s the difference?

Are all humans human? What do we mean when we say that someone, a person, is “inhuman”?

Ironically, the closer we get to answering the question “what is human?” the more difficult it becomes to arrive at a precise answer. And I don’t mean just answering the question in a quantitative way, like some chromosomal measurement, but in those qualitative ways, those cultural and social and emotive ways that make us feel connected to one another, akin to one another. What is a human being to another human being? What happens when we recognize our shared humanity? What happens when we don’t? The more difficult it becomes to arrive at an answer, the more interesting, the more important, the question becomes.

It is in the grey area around the elusive answer to the question of what-is-human where I find a great deal of inspiration for my writing. And what of those beings, both real and imagined, that fall just outside that answer we’re looking for? What of the almost humans, the mutants and monsters and assorted humanoids? That is the question on the other side of what-is-human, and the answer is just as difficult to pinpoint because the line between human and monster is so ill defined, which is why I believe it is such an ideal subject for poetry, an art form well suited to describing the indescribable.

My poems “Grendel’s Mother” and “Required Modifications for the Transhuman” are just two examples where I explore these questions. There are many more in my book Shared Universe. I hope you enjoy them.

Paul reads two selections from Shared Universe, including "Grendel's Mother" and "Required Modifications for the Transhuman."

Paul Vermeersch is a poet, multimedia artist, creative writing professor, and literary editor. He is the author of several poetry collections, including the Trillium Award-nominated The Reinvention of the Human Hand and, most recently,  Self-Defence for the Brave and Happy. He holds an MFA in creative writing from the University of Guelph for which he received the Governor General’s Gold Medal. His poems have been translated into Polish, German, Spanish, and French and have appeared in international anthologies. He teaches at Sheridan College and is the founding editor of Buckrider Books, an imprint of Wolsak & Wynn Publishers Ltd. He lives in Toronto, Ontario. 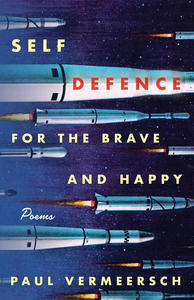