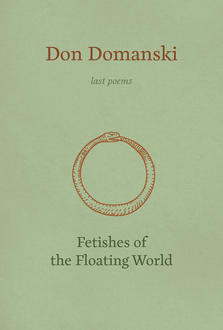 Poetry in Motion: Don Domanski + Fetishes of the Floating World

In his posthumously published collection  Fetishes of the Floating World (Brick Books), Governor General's Literary Award-winning poet Don Domanski offers perception-expanding environmental poetry and metaphysics as a moving, lyric whole. Continuing Don’s lifelong exploration of mystical ecology, the book is an invitation to experience the sacred dimensions of what-is and to become more intimate with the strangeness that haunts our lively, changeable world.

To celebrate the release of his posthumous collection, we share readings from poets and friends of Don's, below.

Three readings from Fetishes of the Floating World, below

Don Domanski (1950–2020) was born and raised in Sydney, on Cape Breton Island, Nova Scotia, Canada. He lived briefly in Toronto, Vancouver and Wolfville, before settling in Halifax, Nova Scotia, where he lived for most of his life. Author of nine collections of poetry, his work is infused with a deep and abiding interest in mythology, religion and esoteric philosophy, and has been translated into Arabic, Chinese, Czech, French, Portuguese and Spanish. He mentored other poets through the Banff Centre for the Arts Wired Writing Studio and the Writers’ Federation of Nova Scotia Mentorship program. Also a visual artist, his work often appeared on the covers of his books. He collected fossils for many years, before turning his attention to meteorites and Stone Age tools. He is credited with discovering the neural arch of a 350-million-year-old (Lower Carboniferous) amphibian previously thought to have gone extinct in the Devonian period. His poetry collections Wolf-Ladder (1991) and Stations of the Left Hand (1994) were shortlisted for the Governor General’s Literary Award for Poetry, and in 1999 he received the Canadian Literary Award for Poetry from the Canadian Broadcasting Corporation. All Our Wonder Unavenged (2007) was honoured with the Governor General’s Award, the Lieutenant Governor of Nova Scotia Masterworks Award, and the Atlantic Poetry Prize, and Bite Down Little Whisper (2013) won the J.M. Abraham Poetry Award.

A special thanks to Brick Books for sharing these video readings with us. Fetishes of the Floating World is available for purchase here on All Lit Up > >>

Poetry in Motion: Talya Rubin + Iceland is Melting and So Are You