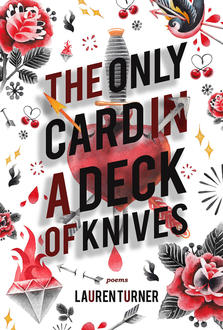 In her debut collection The Only Card in a Deck of Knives (Wolsak & Wynn) Lauren Turner considers societal impulses to reject sick women: these fierce poems told from the perspective of a twentysomething female speaker with a terminal disease juxtapose the violence of a gendered illness with the violence women and non-binary people experience. We chat with Lauren about sickness poetry, disability, poetry as "capital-T Truth," and more. Read on for that and to hear Lauren read two poems from her collection, below.

See more details below
Tagged: lauren turner, the only card in a deck, wolsak and wynn, poetry in motion

All Lit Up: Congratulations on your debut book! Can you tell us a little about your collection and the area of sickness poetry?

Lauren Turner: Thanks so much! My full-length collection, The Only Card in a Deck of Knives was published this July with Wolsak & Wynn after an unavoidable, pandemic-related printing delay, and I’m elated that it’s now out in the world.

The book’s anchoring point is a real-life medical diagnosis that I received at 26, when I learned that a progressive respiratory illness called LAM (lymphangioleiomyomatosis) was creating cysts across my lungs. Currently without a cure, the disease’s prognosis includes lung collapses, breathing difficulties, and eventual respiratory failure. LAM is a gendered illness, in the way that endometriosis or breast cancer are. If you google it, you’ll see that the unofficial symbol of LAM is a pink feather, which is such a soft, feminine image to represent what is, in reality, an unforgiving terminal illness.

When I was diagnosed with LAM, I was just emerging on the other side of an eating disorder and the fallout of several unhealthy relationships. So, in my head, I began to intertwin LAM, as a gendered illness, with the gendered violence I had experienced as someone in a female-presenting body. Like many women, my bodily experience was strained from self-abuse and abusive dynamics with others, before I became aware that my body was slowly disintegrating from an illness that is documented online as a “women’s disease.” Emotionally, it was a lot to process, and I made the decision to publicly explore the experience by writing and publishing poems about it, which became the premise for The Only Card in a Deck of Knives.

From my perspective as a disabled person, the existence of sickness poetry is so important, especially within the landscape of Canadian literature where this type of poetry is still markedly underrepresented. (That said, Kyla Jamieson’s Body Count is a formidable collection, and I’m very much looking forward to Eli Tareq El Bechelany-Lynch’s forthcoming Knot Body.) Living with chronic illness or a disability is a state of being marginalized. Physically, disabled and sick writers often have less opportunity to access public literary spaces, leading to fewer chances for networking, community-building, and attending MFA programs or artist residencies. I wrote most of The Only Card from bed. I’ve had to miss my own readings because I was too unwell to attend. Before the pandemic hit and online readings became popularized, I was recovering from a lung surgery, medically barred from flying, and wondering how I was going to be able to tour my book in a healthy, sustainable way.

Our capitalist world is intrinsically ableist, which raises day-to-day feelings of alienation for me, as I often feel out-of-place and frustrated by the lack of inclusion. But when I encounter work by other disabled creators, there is a sense of homecoming. For that reason, I was very motivated to write a book from the fever-pitch vantage point of facing off with a terminal diagnosis. The writing process was emotionally gruelling, but ultimately helpful for me and I hope, maybe, my book can prove validating for others.

ALU: Now that your book is out in the world, is there anything around the narrative of the book that you feel is not being said? Is there anything you wish readers knew that they might not?

LT: It’s still early days in terms of receiving feedback for the collection, which only found its way into readers’ hands last month. But so far, most of the responses to The Only Card in a Deck of Knives have rung true for me. I find it very gratifying that readers are interacting with my book, let alone engaging with its poems in such deliberate, thoughtful ways.

Within my book’s narrative, I would caution readers to avoid the temptation to fully conflate the speaker with the poet. Poetry, for me, has never been a vessel for delivering the capital-T Truth. It’s a slippery art form. That’s partially why I like it. As a writer, I’m far more likely to delight in inconsistency than attempt to eradicate it, and my poetic speakers tend to exist in a realm of aesthetics and dramatics that extends beyond my embodied reality.

ALU: What were some considerations that went into ordering the poems in your collection?

LT: The short answer is that I ordered the poems chronologically from pre-diagnosis, to diagnosis, to post-diagnosis. The intent was to form a coherent, mostly linear narrative.

I do have a longer, alternate explanation for the ordering—but bear with me because it’s a touch abstract. So, The Only Card in a Deck of Knives is divided into five sections and accompanied by two lengthy prose poems, referred to as Appendix I and II. As you might have guessed from the title, there’s some internal play within the book around the idiom of “play the hand one is dealt.” It’s an expression that I’ve never liked, and this distain only grew after I became sick.

Being chronically ill never feels like having a winning hand, if you’re playing by the same rules as the healthy. Over time, it felt like all my cards were slowly replaced with knives, except one final card and that’s all I have left to play. Why knives? Well, knives are impractical in a card game, unless you realize that you can stop playing with cards and start using the knives instead, thus orchestrating a new game with different, more menacing stakes. Ultimately, the ordering of poems is meant to convey a rising intensity, as the rules of the game shift towards being controlled by the speaker after their previous governance by illness, abuse, and trauma.

ALU: What, outside of other books and writers, inspires your poetry?

LT:  Music, above all else. My poetry is indebted to the songs and the albums that I listen to while writing, which is intentional. Music is the perfect tool for manipulating my own emotions, or conjuring up a memory, to put me in the desired headspace to write a particular poem. Mostly, I listen to a lot of sad indie, like Phoebe Bridgers and Gordi. It can be a bit masochistic, but it works a treat.

ALU: What are you reading these days?

LT: At the moment, I’m reading Ottessa Moshfegh’s latest Death in Her Hands, which is holding my attention. Since we began collectively experiencing this pandemic, I have had a difficult time reading. (It doesn’t help that I also have a partially collapsed lung as surgeries in Montréal are delayed.) When things settle down, I hope to divert my attention to my sizeable pile of spring 2020 poetry releases, including Canisia Lubrin’s The Dyzgraphxst, Conyer Clayton’s We Shed Our Skin Like Dynamite, and David Ly’s Mythical Man.

Thanks to Lauren for answering our questions, and to Noelle at Wolsak & Wynn for making the connection. The Only Card in a Deck of Knives is available now on All Lit Up. For more Poetry in Motion,  click here.

March 3, 2021
Lead with your scars: Healing through visual art

February 23, 2018
Under the Cover: The Myth of Lyme Disease in Canada