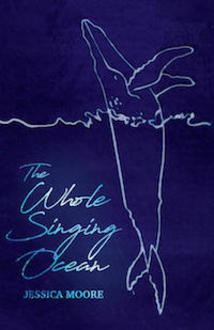 When Jessica Moore finally put pen to paper to tell the true story of a boat builder who saw into the eye of a whale, she thought she had the whole story down—complete. Years later, a trip to San Francisco would reconnect her with that same boat builder who would reveal that this tale had developed a dark and unexpected underbelly that demanded to be told. The fragments of this story would come together as  The Whole Singing Ocean (Nightwood Editions).

I don’t know exactly what to call this book. A fractured narrative? A long poem? An investigation?

Let’s call it a story in fragments.

Is it poetry? Non-fiction? Memoir? Documentation?

Yes. It is all of those things.

I carried this story a long time.

For years, I would go on an annual pilgrimage to Gabriola island, B.C., where I had the luck of being taken in by a rowdy bunch of boat builders. They made my life richer. They taught me sailor slang, how to fish for prawns, how to paint a boat’s interior, and to keep my eyes peeled for deer on the night roads. With them, I swam in phosphorescence for the first time in my life, luminous green ribbons in the dark heart of the sea. One of the boat builders told me a story one night about seeing the eye of a whale. And that’s how it all began.

I carried his tale for years, like a kind of talisman, until 2010 when I finally began to write it.

When I started, the first part—the encounter with the whale—was all I knew of the story. I thought it was complete.

Then, in 2014, around the time that I was learning more about the “islands” of plastic in the oceans, I took a drive up highway 101 with an old friend, and when we got to San Francisco I saw the boat builder again, by chance, for the first time in years. Troubling details had meanwhile come to light. His encounter with the whale had happened while he was at the École en bateau, a French countercultural school onboard a boat. The school’s director, a former child psychologist, took inspiration from Foucault and the ideals of ’68 in his goal to create an environment where hierarchy was abolished, along with any separation between adults and children. An extensive investigation into the École en bateau had taken place since the boat builder and I had last seen each other, and he told me now about the dark underbelly. For him, it shook the very ground on which he stood. It dislocated his memory of what he had believed, until then, to be the most extraordinary adventure of his life.

For me, it was an unexpected, disquieting piece of a story that I had believed was rapturous and closed—one I had thought was already finished. I resisted the turn. But seeing him by chance and discovering this vast other layer felt like something else was at work. At the very least, it felt like the story deserved a chance. I gave it three days. Three days for the story to show me that it needed to be followed. Ecological grief worked its way in, as it does to so much art these days. Other strands and voices popped up. The book began to propel me in directions I didn’t always want to go, towards pieces of my own family story and history.

Memory and trauma, sailor slang and the sacred, binaries and magic underscore this book. At the heart of The Whole Singing Ocean is the question: how might it be possible to hold two very different things at once—rapture and pain—at once?

A special thank you to Nightwood Editions and Jessica Moore for joining us on the All Lit Up blog.

Grab your copy of The Whole Singing Ocean >>

January 22, 2020
Where in Canada: Outport living in McCallum, NL