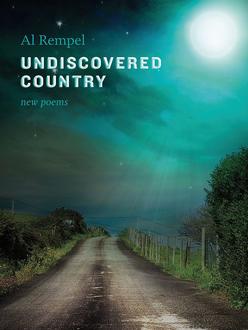 Poetry in Motion: Grief and the Long Poem in Undiscovered Country

Al Rempel's  Undiscovered Country (Mother Tongue Publishing) is a journey through the grieving process after the loss of a loved one. Filtered through the geographical lens of northern BC, its seasons, and its colours, the collection offers a variety of lyrical modes, like the long poem, to explore death, loss, and ultimately, hope.

Al Rempel’s latest book of poetry, Undiscovered Country, is filled with soulful accomplished writing. Inspired by the work of poets included in The New Long Poem Anthology edited by Sharon Thesen, “Into the Cloud of Unknowing” is a long poem at the beginning of the book that journeys on a Prince George road between two mysteries: the northern lights and a bridge shrouded in fog. Rempel has built this long poem with interlocking stanzas that carry the reader through a conversation the poet is having with himself—or another version of himself—regarding death, loss, aging, and dislocation, using childhood memories as touch-points.

Mirroring this long poem is a poem sequence at the end of the book, which chronicles the journey of the poet and his family through the course of a year. Beginning with a line that informs the musicality of the rest of the piece, the poems examine life after Rempel’s parents are gone, and processes past grief while awakening to new possibilities of life. At the same time, the poet interacts with his daughter who is starting to realize that life isn’t always good and fair. In between the long poem and poem sequence are two sections of individual poems, including a suite of elegiac poems for Rempel’s parents.

Al Rempel continues his pared-down writing style from his first two books, This Isn’t the Apocalypse We Hoped For and Understories, stripping away punctuation and using line breaks as markers and opportunities for enjambment. The absence of periods at the end of his poems not only open up each poem to the next, so that the entire book can be read as one long poem, but also shirks off the reader’s temptation to look for finality or a conclusion to each piece.

Rempel has a history of collaborating with other artists, and is launching his book in Prince George with a Lheidli T'enneh drummer, a spoken word performer, and a theatrical director. He has created a number of videopoems in collaboration with musicians, visual artists, and videographers. “Sky Canoe” was screened in Prince George; Vancouver; Dunbar, Scotland as well as in Bristol, UK. One of the poems in Undiscovered Country, “He Talked in His Sleep,” has also been made into videopoem. It uses old family footage (now in the public domain) from 1929, and hauntingly describes an older man dealing with the aftereffects of the war using spare couplets. The visuals and music of the videopoems add to the pieces, and reinterpret Rempel’s poems in unique ways. You can find a link to all of Rempel’s videopoems at  alrempel.com.

Videpoem: "He Talked in His Sleep" from Undiscovered Country.

Al Rempel teaches science and physics at a high school in Prince George, but grew up in the lower mainland near Abbotsford. He has two chapbooks: Four Neat Holes and The Picket Fence Diaries. His poems have also appeared in various journals as well as in anthologies such as Heartwood and The Best Canadian Poetry in English. Some of Al Rempel’s poems have been translated into Italian.

Thanks to Mona at Mother Tongue Publishing for introducing us to Undiscovered Country and for providing these videos. For more Poetry in Motion, click here.