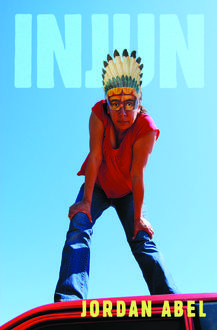 A recent winner of the notable Canadian 2017 Griffin Poetry Prize, Jordan Abel's Injun (Talonbooks) explores the representation of Indigenous peoples during the heyday of pulp publishing, specifically between 1840 and 1950, in a long-form poem. Read on for more about the book, and the artist which Canadian Literature calls "one of the most innovative and thrilling poets writing today."

Award-winning Nisga’a poet Jordan Abel’s third collection, Injun, complements the projects of erasure, context, and reclamation he commenced in The Place of Scraps (2013) and Un/inhabited (2015). For Injun, Abel searched the website Project Gutenberg, an online archive of works whose copyright has expired, for western-genre novels published between 1840 and 1950, the heyday of pulp publishing and a period of unfettered colonialism in North America. The book’s source text was constructed by compiling in their entirety the ninety-one western novels identified; then, using his word processor’s “Find” function, he searched the compilation for instances of the word “injun.” The 509 results were used as a study in context: How was this word deployed? What surrounded it? What was left over once that word was removed? Abel then cut up the sentences into clusters of three to five words and rearranged them into the long poem that is Injun.

The sections of the long poem, which are organized according to the letters of the alphabet, spatially disrupt the act of reading, as footnotes lead one to the back of the book to encounter words that participate in logics and lexicons of settler colonialism—such as “redskin,” “discovery,” and “whitest.” If this first poem, designated as “a)” appears stable, Abel soon destabilizes his text by the time we reach the second half of the alphabet from “p)” onwards. In these later “poems,” words disintegrate, letters sprawl as constellations across pages devoid of horizontal or vertical axes. By the end of the sequence, the reader has engaged with the physical object of the book by turning the pages upside down in order to read the text. A new experience emerges, as the author intended, with meaning and connections manifesting through tactile nature of the text.

While the subject matter of the source text is clearly problematic, the textual explorations in Injun help to destabilize the colonial image of the “Indian” in the source novels, the western genre as a whole, and the western canon. Abel forces us to engage in a new conversation with the literature that has been a cornerstone for tiers, readers, and critics for hundreds of years.

he played injun in gods country
where boys proved themselves clean

dumb beasts who could cut fire
out of the whitest1 sand

he played english across the trail
where girls turned plum wild

garlic and strained words
through the window of night

he spoke through numb lips
and breathed frontier2

he heard snatches of comment
going up from the river bank

all them injuns is people first
and besides for this buckskin

dead as a horse friendship
and time to pedal their eyes

some fearful heap
some crooked swell

bent towards him
and produced a pair

of nickel-plated pullers
a bull winder of

dirty tenderness4
that stiffened into

Jordan introducing and reading from Injun (reading begins at 3:56).

Jordan Abel is currently completing his PhD at Simon Fraser University, where his studies focus on digital humanities and indigenous poetics. Abel’s first book, The Place of Scraps (Talonbooks), was a finalist for the Gerald Lampert Memorial Award and won the Dorothy Livesay Poetry Prize. After the publication of his second book, Un/inhabited, he was named  one of 12 Young Writers to Watch by CBC Books (July 2015). This year Injun was the Canadian winner of the 2017 Griffin Poetry Prize.

Big thanks to Spencer Williams at Talonbooks for sharing Injun work with us. For more poetry videos and excerpts, click here. 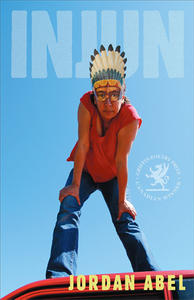 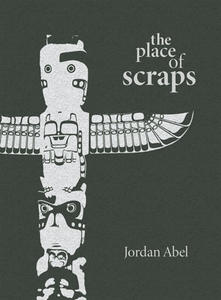 The Place of Scraps