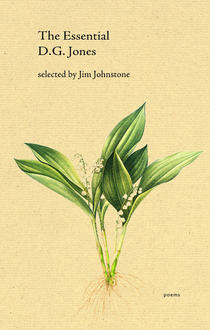 The Essential D.G. Jones is the latest in The Porcupine's Quill's series highlighting Canadian poetic voices, some forgotten but always essential. Editor Jim Johnstone, also a celebrated poet himself, kindly shares with us some of the mastery of D.G.'s poetry and where he sits in the cannon.

The Essential D.G. Jones is the latest in The Porcupine's Quill's series highlighting Canadian poetic voices, some forgotten but always essential. Editor Jim Johnstone, also a celebrated poet himself, kindly shares with us some of the mastery of D.G.'s poetry and where he sits in the cannon.

D.G. Jones’s poetry straddles—and in many ways epitomizes the increasing fragmentation that defines—the postmodern age. His first book, Frost on the Sun (1957), published by Contact Press after he finished his MA in English Literature at Queen’s University, is also his most formal. Released the same year as Ted Hughes’s The Hawk in the Rain, the best poems in the book, like ‘Northern Water Thrush’ and ‘Winterkill’, share Hughes’s metaphysical preoccupations. These poems were reprinted in Jones’s next collection, The Sun is Axeman (1961), which is essentially a second take on his debut, even down to the detail of the sun in the title. The Essential D.G. Jones begins here, as it exhibits the first iteration of the author’s mature style.

Formally, Jones’s first three books could be considered a trilogy. Rigorous, controlled, and for the most part written in regular meter, the poems Jones composed in the 1960s often subvert what Northrop Frye described as Canada’s ‘garrison mentality’. In his book of criticism, Butterfly on Rock (1970), Jones argues for Canadian writers who ‘knock down the walls and let the wilderness in’, communicating with their environment rather than letting it define them. His own work reflects this approach; by the time he released Phrases from Orpheus in 1967, Jones wrote like a poet at home in the national landscape. Consider ‘The Perishing Bird’, one of Canada’s most enduring lyrics:

The mind is not
Its own place
Except in Hell.

It must adjust, even
When the place is known.

Only time
Will tell the mind
What to think,

What birds to place
On what boughs:

At night the owl
Crying, ‘Who?’
In a distant wood.

All else
Is an infernal shade

Where the family trees
Gather their antique
Nightingales

And the ill will
Flowers in the leaves.

For Hell’s the Lord’s
Bijouterie,
A Byzantine world

Where the clock-work birds
And the golden bees
Eternally repeat

What the heart once felt
The mind conceived.

For the mind in time
Is a perishing bird,
It sings and is still.

It comes and goes like the butterflies
Who visit the hill.

The cries of the children come on the wind
And are gone. The wild bees come,
And the clouds.

And the mind is not
A place at all,
But a harmony of now,

The necessary angel, slapping
Flies in its own sweat.

Cocking its head to the wind
It cries,
‘Who me? Who me?’

And whatever the answer,
It forgets.

It is radiant night
Where time begets
The sun, the flowers, Nanabozho’s gift—

Mosquitoes,
Who disturb my sleep—
And everything else.

By likening human thought to an ecosystem that contains birds, bees, and butterflies, Jones tears down the wall between man and the outside world. His vision is specific, and he clarifies that ‘the mind is not / A place at all’, but the comings and goings of the world’s creatures, which he dubs ‘a harmony of now’. In an omnibus review of Jones’s work entitled ‘Coming Home to the World’, George Bowering singles out ‘A Perishing Bird’ as a refutation of W.B. Yeats’s ‘Sailing to Byzantium’. The comparison is apt, as the holy city that Yeats imagines shuts out ‘Fish, flesh, [and] fowl’, and is erected to keep ‘any natural thing’ at bay.

The Essential D.G. Jones is the first volume of selected poetry to span the poet’s entire career. It updates his last selected, A Throw of Particles (1983), and trims the fat to present his most important lyrics. It also includes the never before published ‘The Docks Have Been Hauled Out’ and ‘Suddenly’, written in the intervening years since Jones’s collected poems, The Stream Exposed with All its Stones (2009). Though Jones has published sparsely in the 21st century, primarily in little magazines, his output embraces the digital world’s encroaching chaos, replacing each welcome face with ‘a nameless music, unrehearsed.’ Ultimately, his legacy is one of resolve, having shaped Canada’s multicultural landscape, and adopted a unique voice that looms large within the Canadian canon.

a flock, a body, the birds
moving, moving the air, moving
the bank behind the house, the snow
sieved by sun and rain, the
seeds, the fallout from trees, hedge
a feeder

nervous, a percentage of feathers
lift off, sheer off, a percentage
arrive, others remain, picking their
way, a jittery wave of scavengers, cleaners
over the snow

Explore more poets and their work in our Poetry in Motion column here. 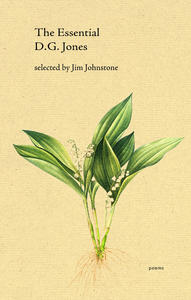