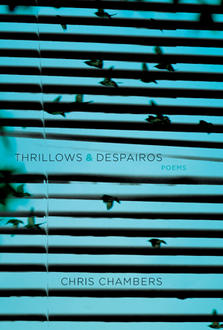 Poetry in Motion: Chris Chambers is “also suitable for non-poets”

With his new collection, Toronto poet Chris Chambers was “just trying to make a readable book of poems.” Thrillows & Despairos (Wolsak & Wynn, 2015) is that book.

After publishing two books with Pedlar Press in the late 90s (first Wild Mouse, with Derek McCormack, followed up by Lake Where No One Swims), Chris Chambers' third collection has been widely anticipated for some time. Thrillows & Despairos was just launched earlier this month by Wolsak & Wynn's new Buckrider Books imprint and it was definitely worth the wait! Some of the poems included have already won the K.M. Hunter Artist Award.

Not only a talented poet, Chambers was also a longtime bookseller in Toronto where he fashioned 650 copies of Margaret Atwood The Robber Bride into a couch and footrest in preparation for her signing. What a guy! Now you're really curious to learn more about Thrillows & Despairos, aren't you? 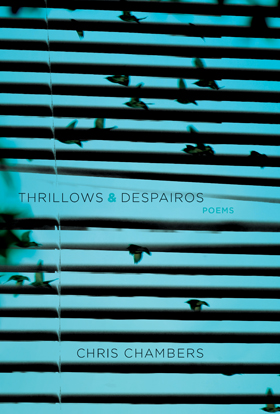 Chris Chambers summarizes his new collection, Thrillows & Despairos (Wolsak & Wynn, 2015), as “A book of nature poems (human and other) where craft and tradition are present and accounted for … [and] much of the nature is killed off in the early action.” Here we have a squirrel who direly underestimates the pep of a Honda Civic, and pigeons whose poor decision-making leaves them hunkered precariously under a deck in a life-threatening gale. We also have poems about cities, loneliness, birch trees, squandering your gifts and making a comeback, good guys and aloo gobi. It is a wide-ranging and somewhat idiosyncratic collection, but it is, above all, readable – and supremely enjoyable.

Asked about his poetic influences, Chambers cites Elizabeth Bishop, from whom he takes his lyricism, and Simon Armitage, from whom he gets the “rhymey wordplay.” From both, he says, he’s “learned much about mechanics, storytelling and beauty.”

One needn’t look further than the table of contents to see the wordplay Chambers is talking about and glimpse the whimsical, sometimes wry sense of humour that permeates these poems: titles like “Good Old Daze” and “Visiting Ours” set the tone.

And certainly one can hear the echoes of Bishop in the musical measures of “Crow,” which begins:

in a pleading completely
uncrow-like squawk:
finding their voices
looking down – agitated
by space
between nest and sidewalk.

Drawing inspiration from the city around him – a city equal parts nightlife and wildlife – Chambers invests his poems with verve and good humour, a unique blend of vigorous imagery and crafty badinage. The collection’s title comes from the poem “May 1st” in which the speaker mentions “thrillows [singing] behind the blinds” and is then asked, “Are those sparrows, Bird Poet?” to which he replies, “Despairos?.../Why despairo?”

And why despairo, indeed, when you have this wise, witty, wonderful collection that is no less powerful for all its playfulness?

Watch Chris reading "May 1st" at the launch of Thrillows & Despairos in Toronto earlier this month:

And one more, because it's a fan favourite, watch Chris reading "Dave Cook": 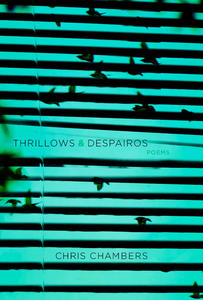