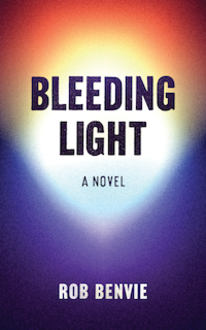 Author Rob Benvie guest stars on the All Lit Up decks, spinning a double-album soundtrack of tunes to pair with a reading of his newest novel Bleeding Light (Invisible Publishing). Take this eclectic mix on your metaphysical hellride through this darkly funny novel that reveals the mystical fabrics of what connects us and helps us transcend into a world beyond.

What does it mean for writing to be “cinematic”? Perhaps it has something to do with creating atmosphere, or the regulation of time’s flow, or the deployment of cuts and breaks in a quasi-filmic way. Maybe all of this, or none?

For my new novel. Bleeding Light, I often imagined many of its sequences unfolding as if in a movie—fragmented, a tad oblique, but with that elusive cinematic quality. Naturally, this led me to imagine its soundtrack. Chasing a whim, I put out a call out to some of my musician friends, just to see if anyone was interested in conjuring something toward a soundtrack of sorts. Maybe the pandemic had left everyone with a surplus of spare time, but to my great joy, almost everyone I asked was into it.

The result is epic, pretty eclectic—a mighty double-album soundtrack, up there with classics like Grease or Saturday Night Fever or, uh, others. You can download it at bleedinglight.bandcamp.com or stream it via your chosen “platform.” Here’s how it goes.

Bleeding Light is a novel with many moments that feel like digressions but are actually pivotal to decrypting the greater goings-on. This monologue appears about halfway through the book, but it could also serve as an introduction, in many ways laying out the novel’s overall mission statement. Somewhat grandiose, yeah, but hey—fortune favours the bold, right? When Sarah sent me her reading of this passage, I felt like something hidden within the text had been unlocked—only when read aloud did it properly stretch out and sink in its claws.

Murray’s a staggering musical force. I used to play in his band The Dears, and every night on tour I watched him utterly decimate audiences. I mean, dudes literally wept. I think this song was actually written for the last Bill & Ted movie, but it works perfectly for the opening. Lot of fools in this novel.

Joel’s one of my oldest and best friends, and possesses a cunning and focus I wish I had a fraction of. He’s a songwriter without limits, and I knew he’d effortlessly distill the book’s feeling, in many ways humanizing something kind of inhuman.

It was exciting to hear how others’ takes on the book’s themes—I offered some vague parameters, but otherwise left things to everyone’s interpretations—added new possibilities and narrative angles, often resulting in cool, even if probably unintentional, synchronicities. Here, Sook-Yin and Dylan take things to a cosmic level, then reel us back down to earth at the conclusion, in many ways mirroring recurring threads of the book.

If Bleeding Light has a villain, it’s Dred Hausen: international arms dealer-tech zillionaire, a cartoonish badguy capitalist who might seem farfetched if we didn’t actually live in a world of cartoonish badguy capitalists. Hearing a true thespian-human like August—this is a guy who bros down with Quentin Tarantino and Raoul Peck and Terence Malick!—“play” Dred makes me titter with joy every time I hear it. Grapes, nom de plume of the irrepressible multitalented Dan Werb, provides the ominous, haunted score.

Bleeding Light is a novel in four distinct sections—each its own story, but interlinking and harmonizing with the others. Basically, the The Sound and the Fury formula, I guess? Following the dreary (non-)conclusion of the first part, we need a fresh sweep, a new dawn. Brendan et al. deliver a hopeful moment with this gorgeous little ditty, before things go to hell all over again.

The novel’s second section is set mostly in early-summer Arizona, focused on a group of kids confined to summer school’s doldrums. AA’s hit single perfectly captures a hazy, wistful aura. If Bleeding Light was an 80s teen comedy, this would be the party sequence. But then, you know, people die.

Drew Smith is the mastermind behind Bunny and a wicked pop craftsman. This jam swoons with his characteristic gorgeous melodies, yet with a fearful uncertainty lurking beneath. Sad and creepy—just what you’re into, right?

In the book, Carson is a wannabe trance DJ from Findley, Ohio who—spoiler alert!—wreaks some major havoc. To tell his story, I knew Elkas was the only man with the right pipes, panache, and soul. I cranked out some lyrics to the meter of Springsteen’s “Darlington County,” and Pete made it soar.

The enigmatic Rockman-L emerges to provide the intermission between the third and fourth sections. The machine is whirring, the cash is coming, but there’s going to be a hefty service charge.

Swirly and spacious, drenched in nostalgic longing—this big fuzzy rocker from DYD is reminiscent of 90s soundtrack jams, yet stakes out its own stadium-sized territory. If there was a scene in the book where everyone goes shopping, then drives off a bridge on the way home from the mall, this would be the musical accompaniment. There isn’t a scene like that, but there should be.

Marker, a.k.a. Chris Cummings, was the first person I thought of when imagining potential soundtrack contributors. His songs are always smoothly composed and arranged, often deceptively effortless-seeming in execution, yet revealing new dimensions on repeat listens. When I told him the book had a character symbolically linked to Ludwig II of Bavaria, the “Swan King,” Chris knew exactly what I was getting at, and seem to conjure this beautiful, ever-so-slightly acerbic jam out of nothing. I love it.

Buck’s oeuvre is unabashedly “cinematic” in its own right, and his productions often feel like soundtracks to movies you wish existed. This one’s dusty and distorted, warping space and temporality—another happy synchronicity between the music and the unmoored, delirious feeling I was shooting for. Aradhya’s a secondary character in the novel, but her story—and how she herself tells it—is key to where it all leads.

A message repeats, a disembodied voice broadcast across space and time. Its meaning is unclear, but for those who listen, the heeding of its call can lead only to catastrophe.

“Are you yourself, or some other creature?’ That’s a great line. My old friend Nobu is at his best when he allows his songs, as in this one, to admit a hint of darkness, a glimpse of doom behind the gleam. Bleeding Light is about what we do in the presence of the ineffable, and to me, that’s also what this song is about. Or that’s what I choose to believe, and it’s my name on the cover, dammit.

One of the things about Bleeding Light I’m most pleased with is how, despite its pretty doleful critique of “human nature” in all its petty, self-glorifying failings, the story takes a reluctantly hopeful turn in the final sections. An actual happy(-ish) ending! And who better to provide the sunny soundtrack than the beautiful men of Tuns. Let the glistening harmonies of Matt, Mike, and Chris chime out as we speed off into the sunset behind the wheel of an ’82 Corvette (it’s in the book, trust me). Roll credits, raise the lights, fade out.

Special thanks to Invisible Publishing and Rob Benvie for sharing this EPIC double-album soundtrack for Bleeding Light. Love music and reading? Check out more from our Mixtape column on All Lit Up. 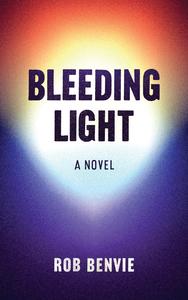