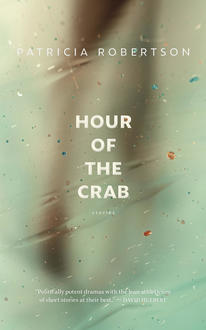 Patricia Robertson joins us for another edition of Off/Kilter to discuss her latest short story collection Hour of the Crab (Goose Lane Editions), and some of its dark themes that while seemingly otherworldly are deeply and unsettlingly rooted in the here and now.

Leyla T: Can you tell us a little about your newest collection Hour of the Crab?

Patricia Robertson: In these ten stories, readers will encounter ten very different worlds, from an eleventh-century monastery in France to a near-future British Columbia where apocalyptic wildfires seem to be never-ending. In the title story, a young woman discovers the corpse of a Moroccan teenager washed up on the beach in southern Spain and sets out to find his family in a gesture that destabilizes her own. In another, an international aid worker shares her house with the very real ghost of a gardener’s boy. In “The Old Speech,” the last speaker of a dying Norse-like language carves the words he remembers into the stones of his house.

They’re stories that have one foot firmly on the ground and the other somewhere else. I think of them as a form of heightened realism.

LT: From bad omens and ghosts, to ancient and cryptic languages—there are definitely dark and unsettling undertones to the stories contained within this collection. Where does your inspiration for these elements come from?

PR: I think life is dark and unsettling, don’t you? And full of mystery, which is always a presence in the fiction I love the most. I grew up on British fairy tales, which tell the truth about human existence in ways that much contemporary realistic fiction can’t, unless it’s grounded in or informed by the archetypal or the mythic in some way. I think that’s why speculative fiction has become so popular and has gained legitimacy as a literary genre.

LT: Both Your previous collections City of Orphans (Porcupine's Quill) and The Goldfish Dancer (Biblioasis) and now Hour of the Crab (Goose Lane Editions) all share this thread of the unreal. How have your ideas and writing of the imaginary changed between your first two collections and this one?

PR: A great question! I would say my stories have become more complex and multi-layered, and at the same time more political, by which I mean more aware of the dynamics of power in societies and relationships. I’ve lost interest in literature that focuses only on the self, which holds a mirror up to our society without questioning it. Given the multiple overlapping crises facing us, from the climate emergency to mass extinction to destruction of habitat worldwide, I don’t see how writers can write about anything else now. Of course that doesn’t mean didactic fiction, but it does mean that contemporary settings require such knowledge—what has been called “twilight knowing” because of our denial of what is happening—to be part of the characters’ lives in some way. There’s some brilliant Australian fiction being published, in a country where everyone is being traumatized by the climate emergency. Examples include The Animals in That Country by Laura Jean McKay and Dyschronia by Jennifer Mills.

LT: Apocalyptic wildfires and a dystopian Spain serve as backdrops within a couple of your stories. Is there an extent to which these settings serve as warnings or a commentary on the future or the state of the environment?

PR: I don’t see them as commentary on the future. These settings are here now. Dystopian governments exist today over much of the globe, in Poland, Myanmar, Hungary, Russia, China, and elsewhere.

As for wildfires, take the 2016 Fort McMurray wildfire. More than 88,000 people fled—the largest wildfire evacuation in Alberta’s history—and 2,400 homes and buildings were destroyed. A woman called Erica Decker, whose family fled with only the clothes on their backs, told The Guardian that “it was absolutely apocalyptic, there were vehicles stranded everywhere, the sky was black and orange, there were – and are still – so many people trapped.”

And then there’s the 2019-20 wildfire season in Australia, when 20% of the country burned and nearly 3 billion animals were killed or displaced.

LT: Is there any one story out of the collection that you hold a deeper personal connection with, and if so, why?

PR: I lived in Spain for three years in the 1970s and continue to follow events there. The stories of refugees and migrants were gut-wrenching. In the course of my research for the title story, I read about a teacher and his wife who discovered 27 bodies on the beach from one capsized vessel, and who all turned out to be from one tiny Moroccan village. In an effort to stem the tide, the couple founded an NGO that provides support to this village. They built a school, they bought goats, they helped create possibilities so that the men wouldn’t have to make the dangerous journey to Europe. But the migrant crisis is worsening, and European governments are focused on building Fortress Europe.

LT: What’s on your TBR for 2021? Any short story collections (past, present or forthcoming) from other Canadian authors you’re excited about?

PR: When I want a treat, I re-read Mavis Gallant’s Selected Stories (McClelland & Stewart, 1986). I love her sly wit, her deep understanding of the world and its power dynamics, her fearlessness in what she portrays. She spent most of her adult life in France, and there’s a cosmopolitan, wide-angled vision at work in her stories. She saw the floods of refugees and the displaced after World War Two and wrote about exile with brilliant insight, perhaps because she was an exile herself. Virginia Woolf said of George Eliot that she wrote “fiction for grown-ups,” which is exactly how I’d describe Gallant. She was a journalist before she published fiction, and her use of detail has a precision and economy that I love. She is utterly unsentimental and her tone is often astringent—like a dry vermouth!

Patricia Robertson grew up in British Columbia and received her MA in Creative Writing from Boston University. She is the author of three books of stories, including City of Orphans, a finalist for the Ethel Wilson Prize. She lives in Winnipeg.

October 26, 2017
How Do We Summer? ALU Staffers Share Their Reads