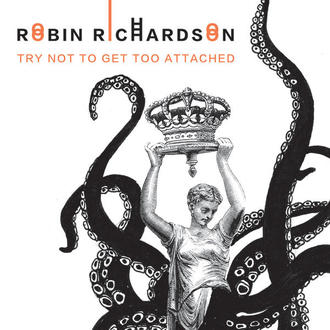 With its melding of poetry and collage – of line and colour – Robin Richardson's Try Not to Get Too Attached  (Book*hug Press) is a dark and beautiful ode to the  undying question of what it means to be human. I sat down with Robin to find out more about her surreal artistic style, translating the sublime and representation for women in the arts.

See more details below
Tagged: try not to get too attached, robin richardson, book*hug press, off kilter, beautiful books

One of my favourite articles by art critic Jerry Saltz, ( How to Be an Artist) includes a lesson (Lesson 11) that calls for developing one’s own School of Athens: “A team of rivals, friends, famous people, influences dead and alive.” Who would make the team in your own School of Athens and what does each team member bring to your work?

Wow, thank you so much for the question. I love it!

Obviously, this particular project drew a bunch from anonymous medieval artists, whose childlike approach to drawing allowed me to relax into a zero-pressure headspace of fun and exploration.

Beyond that, my School of Athens began I think with Anne Frank, who aligned me with a sense of dogged dedication to the recording of life in words, and to sublimation in general as a way to cope with adversity and isolation. She was my first literary mama, and had a tremendous impact. Virginia Woolf is a constant reminder of authentic and totally vulnerable engagement with the world for the sake of relaying it well to others as well as a dedication to my own perspective and mode, however unconventional. Kevin Pilkington, who was a mentor at Sarah Lawrence comes in every once in a while to say loudly “of course it’s hard, it’s poetry!”. Also, Stephen Dobyns, who picks apart my metaphors and taps at the potential chinks in my logic and syntax. Robert Frost checks me, like Virginia Woolf, for authenticity, always shedding light on bullshit and pointless acrobatics.

Lately I’ve come to imagine handing my work over to a team comprised of Matthew Zapruder and Timothy Donnelly, who are impeccable editors and poets. I often try to see my work through their lens and hold it to their standards. I’d give a great deal to have an editorial relationship with them in real life.

Flannery O’Conner, Denis Johnson, Arvo Part, Dostoyevsky, and Aubrey Beardsley are a mix I like to throw my work against to see if it stands up. Of course, it never does but it’s a helpful aspiration and a humbling exercise.

In reviews, your work has been described as touching on the sublime. It’s a bit of a paradoxical effort to translate the sublime, especially using any one form, so your pairing of of visuals and language is a brilliant approach. In your process, did poetry or design come first and which would you say was more difficult to create?

That’s definitely the intention, and is such a trick to pull off. I think poetry and art lend themselves better than most forms to the sublime, though actually, on second thought, perhaps music trumps both, but I’ve no training in that. My aspiration to express my own relationship to the sublime is all-consuming. It’s such a rich and euphoric thing that I just feel this bursting need to share. So I came to poetry because it allows for paradox and for the kind of inconclusive and immersive experiences in which the sublime can be found. Someone once said to me that our relationship to the divine is asymptotic, and therefor will always be inconclusive, always getting closer, never touching, never knowing. When I write and when I draw, I work from a space of unknowing, a bewildered exploration of that feeling of euphoria and dread, that open expanse of being that can’t be understood or defined. I believe it’s my job as an artist to make that indefinability known – to help us accept uncertainty and impermanence as our undeniable birthright.

In this book the drawings and the poems had both been forming independent one another, but from and for the same preoccupation. They are aligned, but unintentional. It’s hard to say which is easier. I think ultimately the drawing, because when I draw I really am in a place of pure play. I feel no pressure whatsoever, and often do it while listening to a recording of Ramana Maharshi or Krishnamurti and so I really ease into this place of peaceful exploration and non-judgment of my own process and output. Because my poetry is more frequently judged and engaged with by the public, there is an added pressure to it that makes it better, I think, but more difficult.

In your work, I can recognize elements of medieval manuscript and collage through the mediums of ink and pencil. Tell me a bit about how you arrived at your style?

I think my style has a lot to do with being an outsider artist. I never dedicated myself to the craft of drawing the way I did writing, and so, while I enjoy doing it, I’m only proficient at the level of mimicry. I copy things that are free to copy, and piece them together into something new, often that new configuration being itself an unintentional outcome, and an act of discovery. So instead of outlining and conceiving of some design, I grab bits of things I like and instinctively put them together in a process that’s more like dancing than composing – just sort of feeling lines and shapes and gestures until there seems to be suddenly a finished product in front of me. That finished product often tells me what my intention was all along. I love this as a process because I have so little faith and/or interest in my own intentional conscious thinking and am so much more interested in using surrealist approaches to excavate the good stuff that lies a little deeper, beyond my knowing.

I’m also hyper-aware that the artists I collage from are simply better than I am and I’d rather work in conversation with their craft – highlighting and reforming it to meet my vision, rather than attempt to “show off” my own fairly mediocre ability. 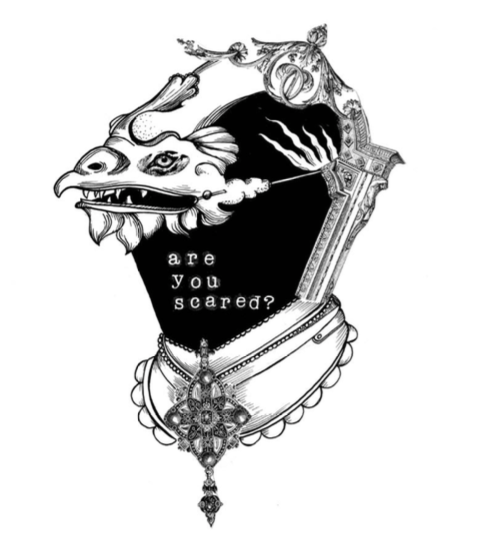 Traditionally women in art, particularly in surreal art, have been sorely underrepresented, despite having used the surreal for decades as a way to speak about issues of marginalization, sexism, trauma and more. Can you speak to that at all and whether you have met any challenges yourself in bringing your work to public audiences?

Hmm. Yeah, I mean, this was a very big issue in my early and mid-twenties. I simply hadn’t earned my audiences’ trust yet and so rather than being asked questions like the ones you’re asking now, a certain amount of thoughtless criticism and dismissal was thrown at me. This issue was two-fold. It was the result of my own youth, which made it extra easy to dismiss me, as well as the climate of the time: back then men ruled and they generally tended to make a girl like me feel less-than and rather silly. Both because now I have a reputation and many signs of age, and because the climate has drastically changed for the better, this is no longer an issue, save for with the occasional encounter with an older gentleman who hasn’t yet gotten the notice that women are autonomous beings capable of great art.

Overall, I’m thrilled to have been around long enough to see such a massive shift. I look at the young women creating now and think how lucky they are to have no idea what it was like to publish amongst a club of men who were constantly asking “and whom did you blow to get that book deal?” We’ve done and are doing a lot of hard work in making a shift and it really shows. 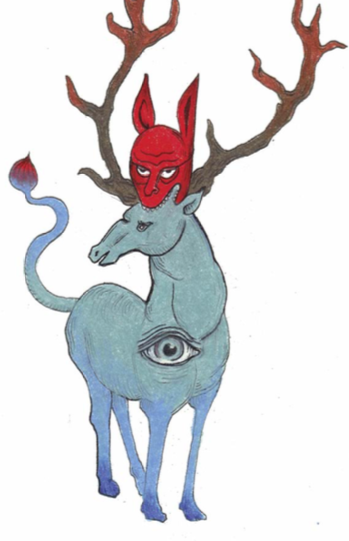 How has the surreal helped you to tell your story or helped to communicate in some way your ideas on what it means to be human?

It’s instrumental. I believe the experience of being human in and of itself is totally surreal. Anyone who would disagree is simply not paying attention. I find that whenever a subject is approached with a scientific or intellectual exercise of intent, the attempt falls short, I mean, of course it does, nothing is knowable, not to us little humans anyways, with our little human brains. the best we can do is let some deep movement within us shift towards the totality of existence in a dance rather than an equation. At least that’s the best approach for me. I see myself sitting most thoroughly in reality when I am devoid of intention and protocol, when I am playing. So here a sort of surrealism helps, not strict surrealism mind you – it’s less about stark dumbfounding contrast and more about jumping into a playful chaos knowing that somewhere in there is a glimpse at the truth, and hey, if there’s not, at least the whole ordeal will have been a great deal of fun.

A special thank you to Book*hug Press and Robin Richardson for joining us on the blog. Try Not to Get Attached is now available for purchase on All Lit Up. 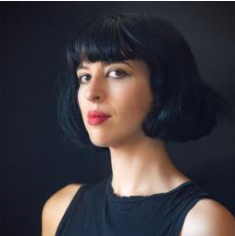 Robin Richardson is the author of three collections of poetry, including Sit How You Want (named one of the best books of the year by CBC Books and winner of the 2019 Trillium Book Award for Poetry), and is Editor-in-Chief at Minola Review. Her work has appeared in Salon, POETRY, The American Poetry Review, The Walrus, Hazlitt, Best Canadian Poetry, and Tin House, among others. She holds an MFA in Writing from Sarah Lawrence College, and a BD in Design from OCAD University. She has won the Fortnight Poetry Prize in the U.K., The John B. Santorini Award, The Joan T. Baldwin Award, and has been shortlisted for the CBC, Walrus, and ARC Poetry Prizes, among others. She lives in Toronto.

Try Not to Get Too Attached

August 3, 2019
Under the Cover: Novels from Stories