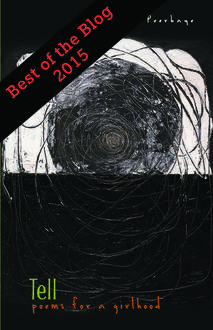 This month's featured author is Soraya Peerbaye, author of  Tell, published by Pedlar Press. Tell is a collection of poetry partially based on the Reena Virk murder case. Virk was an Asian adolescent whose drowned body was found in the Gorge Waterway in a Victoria, BC suburb, in 1997. 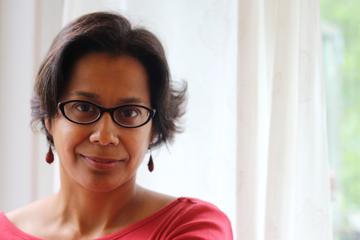 This month's featured author is Soraya Peerbaye, author of  Tell, published by  Pedlar Press. Tell is a collection of poetry partially based on the Reena Virk murder case. Virk was an Asian adolescent whose drowned body was found in the Gorge Waterway in a Victoria, BC suburb, in 1997.

From the publisher: "Some of the poems use found material from court transcripts. The murder made international headlines due to the viciousness employed by Virk's assailants: seven girls and one boy between the ages of 13 and 16, five of whom were white. The poems examine in part the poet's remembrances of girlhood, the unease of adolescence, and the circumstances that enable some to pass through unhurt."

I interviewed Soraya by email and am grateful for her thoughtful responses, which you can read below.

I read Soraya's book and found myself deeply affected, particularly by the poems that call out the assailants' whiteness, and by those that describe the physical locations of the murder in vivid detail. I found the collection haunting and terrifying, and asked myself what I should be taking from the book; I can't take any hope. I think what I've decided on is that my job as a reader is simply to bear witness and to take the discomfort and sit with it. It's ours to bear until we can confront racism and white supremacy and eliminate violence forever. I urge you to read this book and bear witness with me.

Julia Horel: Can you tell our readers about Reena Virk and what happened to her?

Soraya Peerbaye: Reena Virk was a 14-year-old girl of South Asian descent living in Saanich, a suburb of Victoria, British Columbia. In November, 1997, she was lured to the Craigflower Bridge, which spans the Gorge Waterway, an estuary that winds up from Victoria Harbour. Two girls intended to punish her, for bad-mouthing them, sleeping with one of their boyfriends. The assault was initiated when one of them burned a cigarette onto her forehead, between her eyes, where a bindi might have been. At least eight young people participated in the beating - seven girls, one boy; five of them white – while many more looked on. Badly hurt, Virk still got up and crossed the bridge to go home. At the trials, it was alleged that two of her assailants, Kelly Ellard and Warren Glowatski, followed her and beat her again to the point of unconsciousness; and that Ellard dragged Virk into the Gorge and drowned her. Her body was found eight days later.

JH: Why did you choose to write a book based on Reena's story? What was the process like?

SP: I was, like many, moved by her story, and troubled by details that were glossed over in the trials and the media. I had thought I might write a play about it, and in part this is why I attended the 2004 trial of Ellard: to hear all of these young people's voices. What struck me most was, on the one hand, the flatness with which they described what they had done, or why they had done it; and on the other, how vividly they remembered the natural elements around them. I also spent some time in Victoria walking along the Gorge, an ecosystem which has been urbanized but where you can still see remnants of it, restoration efforts, salmon counting bridges and so on. I realized that if I was going to write about this, I had to accept the fact that I wouldn't be able to say with certainty what had happened, to speak to motive, to make the story whole. And also, that I'd have to be open to the dissonance, of beauty and violence; or simply, how we look at some things with attention and call it beautiful, when we turn away from other things and call it ugly. I found it difficult to write and there were long periods where I just set it down.

SP: Poetry because I love that it asks for an understanding that is intuitive. Because the tension of reaching for that understanding can come into it. Poetry for this, in particular, because it released me from questions of guilt and innocence and opened something larger; because it gave me time and space to understand the way certain things resonated for me, over moments or sites that felt wildly unrelated.

JH: Several of the poems in Tell are told in first-person. Some seem to be in Reena's voice, while others seem to be in a narrator's voice. Are the narrated poems in your voice? How did you get into Reena's head to write in her voice?

SP: Yes, the poems in first-person are in my voice. I don't think of any of the poems as being in Reena's. I think there is perhaps a fragment of a line in one of the last poems where I gave myself permission to imagine her consciousness. But I realized early on in the project that I couldn't imagine the extraordinary degree of suffering she must have experienced; that any attempt at essentially trying to "be" her felt garish. I tried to be rigorous in working with only what the testimony could give: the young people's statements, yes, but also exhibits, the statements of search divers, climatologists, the pathologist etc... the contradiction and confusion of that. In my mind this means that Reena is not visible in the way I wish she was: I can only see her obscured, or in glimpses, but inevitably I have to return to what I'm given in a material way.

JH: The poem "Clean" affected me so much that I had to put the book down for several minutes. In it, a clean, white floor is compared to the clean, white skin of Kelly Ellard, who was (with Warren Glowatski) convicted of Reena's murder. Racism was obviously a major factor in Reena's murder, and the whiteness of the accused a factor in the subsequent murder trials (as it always is in a white supremacist justice system). Are themes of race and identity just as central to Tell as the death of Reena Virk? How?

SP: I think so. You say the racism is obvious, and I agree, but in fact the crime was never defined as racially motivated. Law wants a clear-cut difference between victim and assailant, a language or conscious rationale; racism was dismissed because two of the assailants were black. (Later Warren Glowatski would also learn he was of Métis heritage.) There was no consideration of how young people of colour could be involved in a racist crime. Part of what I found myself dealing with was, what do we do with our inability to name this? How does a child speak of racism, as the subject or agent of it? And what do we do with our collective amnesia around our colonial history, or our history - as people of colour, too - as settlers? There was so much shock expressed that such a crime could take place in Victoria; but the Gorge Waterway, like any place in Canada, is a site full of forgotten histories of racial violence, including the bridges themselves: the Craigflower Bridge which was built to give settler children access to the Craigflower School, the Johnson Street Bridge which was once destroyed to prevent Aboriginal access to Victoria. How does all of this reverberate, when we cannot name it, acknowledge it, remember it?

JH: Who is this book written for? Who do you hope will read it? What would you like readers to take from it?

SP: What a difficult question! It's written for anyone who may be willing to bring themselves to it. It’s a book that I want people to read, but especially in relation to their own experiences, or in relation to other works. I really hope that girls and young women will read it, and especially girls and young women who feel as though their difference is written on the body. I would like readers to close the book feeling that we've looked at an experience together, been with it together, even if it leaves us in different places.

JH: That last question is as much for myself as for the column; I'm left feeling like I want to take some hope, some lesson, but I'm finding only emptiness and loss. Maybe that's exactly what I'm meant to find.

SP: I don't know, to be truthful. Maybe emptiness and loss is all right. I mean, maybe we need to make that clearing once in a while. Emptiness is at least a place to begin. 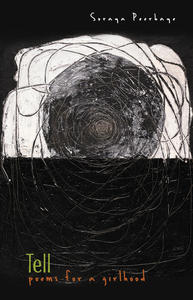