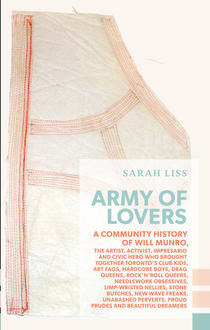 Jules' Tools for Social Change: Army of Lovers; an interview with Sarah Liss 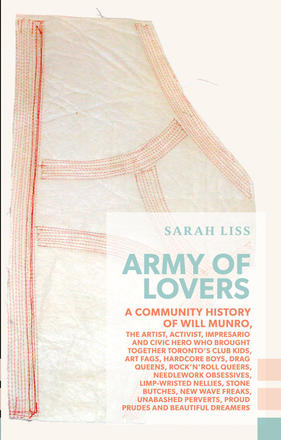 Army of Lovers is structured as a written version of an oral history (if such a thing can exist) of Will Munro, a queer civic activist who had a major impact on the local queer art, music and cultural landscape of Toronto, and whose untimely death from cancer at the age of 35 left a huge hole in the community.

From the publisher: “Weaving together a collage of stories from and about the people who knew and loved him, Army of Lovers is both a biography of Will Munro and a document of a galvanizing period in the history of Toronto, a moment when the city's various subcultures — the queer community, the art scene, the independent music universe, the grassroots activist enclaves — came of age and collided with one another.”

I spoke with Army of Lovers’ editor, Sarah Liss, at a coffee shop over the winter holidays. It was too noisy to record the interview, so please enjoy my attempt to re-create our conversation from my copious notes.

How did the book originate?

Sarah describes the Coach House Exploded Views series as a analogous to Semiotext(e) and the 33 1/3 Series: short, focused books picking up the slack from the longform magazine writing that has fallen off in recent years.

The Exploded Views series is edited and curated by Jason McBride, with whom Sarah had worked at one time at the CBC (they became much closer friends in the course of working on the book!). Seeking out stellar authors he knew, Jason contacted Sarah to ask her to write a book for the new series, but left the topic to her. She knew immediately that the only subject she wanted to publish a book about was Will Munro.

From the beginning, Sarah says, she was “very aware of not having the right to own [Will’s] story." As he was such an influential community member, lots of people have wanted a “piece” of him or to claim close connection with him posthumously, and so it was important to her that the book be a collaborative effort. She originally imagined the book as a collection of essays with some associated ephemera, but was influenced by a lot of oral history work going on at The Grid, where she worked at the time, and the format of the book changed.

“Wanting to have a chorus of voices felt very true to Will,” she says, and such a format ensured that Sarah herself wouldn’t be at the centre of the story.

Actually beginning work on the book was difficult, after the initial agreement to take it on. Sarah began to reach out to folks connected to Will, not knowing how her requests would be received. She also wrote a piece for The Grid called “ Force of Will”, which served as a “public first step” toward collecting responses, stories and contributions from Will’s friends and loved ones. “Force of Will” as eventually adapted as the book’s preface.

The responses came in from all over. “It was a hugely rewarding experience” to have such generous and open contributions from the community for the book, Sarah says. Meeting the person who was Will’s partner at the time of his death was particularly profound.

Who was Will, and why is he so important?

Will was a catalyst for bringing together communities with shared values and goals. He had a way of creating spaces where it was safe to discuss privilege and intersectionality, something Sarah says was lacking in the Toronto queer communities. “Will has this gift, through his work and the spaces he created, that allowed people to cross paths with people with different experiences … he opened up the possibilities of what community can mean and how it can form.”

Events like Vazaleen, Will’s queer nightclub punk-rock parties, helped to expand the queer and trans communities to come together and to include all different types of people. Held outside the Church-Wellesley gay village and deliberately inclusive of all genders, these events cut through community divisions.

Will was also a prolific artist, perhaps best-known for his underwear art. Sarah had a much better understanding of the scope of his artwork after working on the book; to learn more, she recommends the Art Gallery of York University’s book Will Munro: History, Glamour, Magic.

What is Will’s legacy?

After Will passed away in 2010, there was “a bit of coming apart” of the community, but Sarah sees this as a natural evolution of a community coming of age, as well. Some of Will’s work is no longer specifically needed in the same ways, because the needs of communities change as they evolve. On the other hand, some events continue today: Vazaleen still takes place annually as a Pride event.

Perhaps more profoundly, Sarah sees echoes of Will’s activist work in the conversations and issues slowly making their way beyond alternative media and communities. Issues of consent, privilege and intersectionality are being discussed in mainstream media. “Alternative viewpoints and social ideas make their way into the mainstream eventually,” Sarah says. The community Will helped to create was elevated by his work, and continues today to work for inclusivity, accessibility and change.