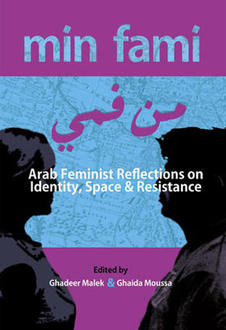 I was lucky enough to attend an incredible launch for this book in Toronto in May. I found the readings and extensive conversation between the writers, editors and audience members all at once fascinating, heartbreaking, inspiring and humbling. This month, I had the opportunity to ask the editors of Min Fami a few questions about their process, goals and hopes for their book. I truly hope you take the time to read their words and pick up a copy of this important anthology.

‘Til next time,
Julia 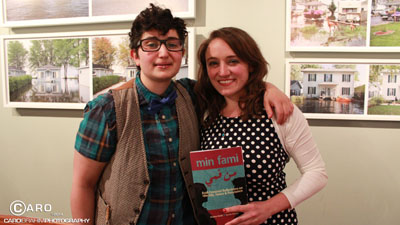 Julia Horel: How did you come up with the idea of putting together Min Fami?

Ghaida Moussa: It’s kind of difficult to trace an initial starting point to all of this (see my intro to the book!), but I think it was a combination of a need for connection, a sense of loss, an overwhelming feeling with everything going on back home, and a deep-seated desire to understand identity, home, belonging and know what others are up to.

Ghadeer Malek: Ghaida initially had the courage, I would say, to put a book together that would touch on the issues of identity, home, resistance, history — issues that we all talked about within our circle of friends, but wanted to understand how others were talking about these issues. When she came to me with the idea, I was ecstatic to participate in building a book together that could potentially bring a large number of Arab women's voices together. I wanted to hear from everyone, and most importantly, I wanted to see how they expressed things: the language they used, the forms of expression. I had no doubt that these issues touch all Arab women, especially in the diaspora, but I wanted to know whether they were as integral to who they are as they are to me. I wanted to get a sense of how passionately these issues impact us — and I had a feeling that writing or creative form would provide an indication of that.

Julia: What was the process of soliciting, choosing and editing submissions like? Was it different than what you expected? Did anything surprise you?

Ghaida: If Ghadeer or I told you that we had any idea about what we were doing, we’d be lying. We really threw ourselves into this not knowing what to expect and were often taken aback by a feeling of “imposter syndrome.” That being said, soliciting was the easy part. We were amazed at how many people submitted (and really just needed one round to get all the submissions we needed to put a book together, as far as I remember). That was pretty validating — it was like, okay, we’re not the only ones thinking about all of this, and there seems to be a need to have these conversations that is beyond us. That’s when it truly made sense, I think, that this would be a space for us to converse together, challenge each other, and meet, even though on paper. Choosing and editing were more difficult, and this is mostly because we kept landing in moments of ethical dilemma and being very self — and team — reflective, if you will. It was clear early on that editing was political to us, and we struggled and challenged ourselves to listen to those thoughts instead of shutting them out for productivity or convenience. I think we both felt a great deal of responsibility towards contributors and wanted to preserve the integrity of their work. Needless to say, language came to play a much bigger part than expected in this whole process (I’ll talk more about that later).

Ghadeer: The process started from a call-out that Ghaida and I put together for abstracts. I think that was the most exciting stage of the whole process. Putting out a call-out felt like announcing an intention to write and waiting to hear the echoes from other Arab women writers. And people did respond. Our inbox flooded, from established writers to new voices. We were overwhelmed with the response, and for me, it was a small proof that Arab women writers exist and are plentiful, despite the fact that they are rarely mentioned in our schools and universities.

Julia: How did you determine the main themes of the book? Was the structure planned from the beginning or did it emerge later on?

Ghaida: I don’t remember if we picked the themes first or if they came later, but if you read the book, you’ll see that the themes overlap quite a bit, and that is because — I guess this is both a surprise and not a surprise — identity, space and resistance are so intertwined. Putting together an anthology is an interesting process because, perhaps more than other book forms, you have no idea if readers will read it from start to finish or if they will jump from piece to piece based on their interests. So I think we framed how we wanted people to read the book in Ghadeer’s intro. We said: read it in a way that appeals to you — pull it apart, skip what you want, come back, read it upside down, do what you will … but as editors, we’re presenting to you how we read it, how we see these pieces speaking to each other, building on each other and interacting. Since we had academic pieces, visual art, poetry, critical self-reflections and short stories, I think it was also important to us to let readers see how authors might use various styles to speak about a particular subject, so you’ll notice that an academic piece on motherhood might be following a short story about a contributor and her mother, or an academic piece on resistance through graffiti might be followed or preceded by a visual piece on the same subject. This being said, maybe no one noticed!

Julia: Can you speak a bit about language, and compiling a book of Arab women's writing in English?

Ghaida: Like I mentioned earlier, I think we didn’t expect language to play such a huge role through this process, but it really hit us in the face. We stumbled with our own language and English skills, we dealt with guilt and shame and a sense of loss, we were deeply aware that we wouldn’t reach a big part of the people we wanted to reach and that we were complicit in processes of cultural imperialism, and at the same time, we discovered a beauty in the breaking of language breaking, in playfulness that emerges as resistance, in our shared inauthenticity … let’s just say it’s been quite a ride!

Ghadeer: Language is an important factor, and I think we got a lot of requests to translate the book. It would be a dream come true to translate the book; however, for the moment, it is in English, and I'm sure that this acts as a barrier for Arab women writers who write in Arabic or read in Arabic.

Ghaida: We get asked this question almost every time we do an interview, and I think it’s a difficult one for me to answer, perhaps because I know who we missed/will miss/won’t reach. For me, personally, with every word I wrote in the book, and even during the editing process, the question that guided me was: “will my mama connect to this?” It might be strange, but I couldn’t imagine having this conversation without her and my aunts present, and for them to be present, it needs to speak to them.

We feel quite elated by the feedback we’ve been getting in person or online, and even more intensely at book launches. We’ve had such great turnouts and conversations there that at times, it feels kind of strange going back to real life because we want to hold on to those moments where we get to be vulnerable and speak to each other. We’re also excited that the anthology is being ordered by a small group of professors both in Canada and the United States, because we think the contributors have a lot to offer in terms of adding and challenging things in an academic setting. I didn’t personally encounter much work by Arab women (if at all) in my schooling, so I think this is pretty huge for us.

Ghadeer: This is a good question! I think Ghaida and I did not have a specific intended audience as much as an urgency to put a book out into the world that showcased a diversity of Arab women's voices. Sometimes I think this book is for young writers like me who always had to search and seek out Arab women writers, and other times, I feel it’s for people who don't know, and have this one-dimensional view that Arab women are oppressed and silent.