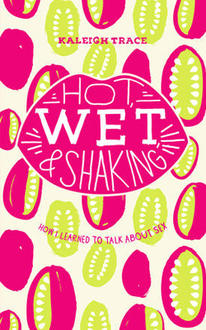 Jules' Tools for Change: Hot, Wet, and Shaking; an Interview with Kaleigh Trace

Welcome to the inaugural edition of a new monthly column, Jules’ Tools for Social Change. Every month, I’ll be bringing you a new featured book, author or publisher whose work deals with issues of race, gender, sexuality, ability, colonialism, economic justice, or other social justice topics.

Welcome to the inaugural edition of a new monthly column, Jules’ Tools for Social Change. Every month, I’ll be bringing you a new featured book, author or publisher whose work deals with issues of race, gender, sexuality, ability, colonialism, economic justice, or other social justice topics. 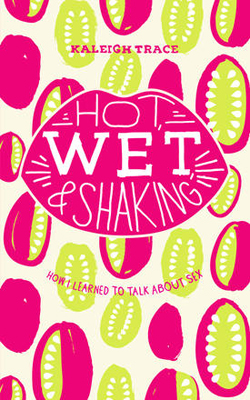 This month’s featured author is Kaleigh Trace, a queer and disabled feminist sex educator, whose first book, Hot, Wet, and Shaking, was recently released from Invisible Publishing. From the publisher:

This is a sex book. It’s a book about having sex by yourself, with one person, or with twenty people if everyone is down. It’s about saying words like cunt, fuck, and come. But it’s also about the things we don’t talk about—the mystery, the expectations, and the bullshit that can go along with sex.
Kaleigh Trace—disabled, queer, sex educator—chronicles her journey from ignorance to bliss as she shamelessly discusses her sexual exploits, bodily negotiations and attempts at adulthood, sparing none of the details and assuming you are not polite company.

Kaleigh and I had a conversation by Skype that can be viewed in the video here. A complete transcription is below the video. Kaleigh discusses the publishing process, what her friends think about her work, and the ways in which her identities intersect and inform her experience of writing.

Talk to you next month!
Julia 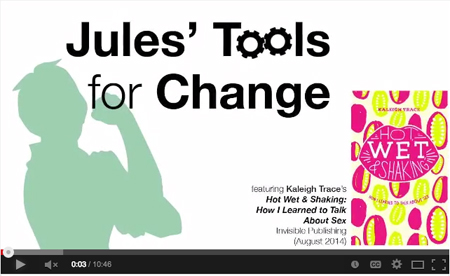 JULIA HOREL: Hi, Kaleigh. Thank you for talking with me once again. For anyone watching this, this is actually our second attempt at doing this. We are doing this again because we had some technical difficulties the first time, but this video is going to be just as good as the first one.

So my first question for you today is: how did you get started with writing?

KT: I’ve always been somebody who writes things. I love keeping journals. But I never intended to write for other people to read, for an audience – or I didn’t intend that initially. I was writing as a youth, and then I began blogging in 2010, I think. I began a blog in response to having an abortion and feeling like there was a huge lack of information out there about it. I wanted to have a space on the Internet to go and find out about what will happen without having to find all that weird, pro-life misinformation. So I started blogging because of that, and wanting to write about disability in a public forum, my experience of disability. That led to this book in a totally organic and totally unpredicted way. So I came to it all … not from a straight line, or not with full intention.

JH: That leads to the next question … this is working out just great, just like the last time!

JH: Unlike a lot of writers, you had a publisher approach you for a book, rather than you pitching the book to them. What was that like for you?

KT: I’ve loved my experience of working with Robbie MacGregor, Megan Fildes, Nic Boshart (although he’s been on vacation) and Veronica Simmonds, who all work with Invisible Publishing, which is my publishing house. They’re amazing, they’re so helpful, and it was so kind of them to commission me to write a book – generous and exciting and awesome. But the act of being commissioned to write a book: it’s so awful. (laughs)

I don’t mean to complain: I recognize that it’s a huge privilege to be given the opportunity to write a book. I’m so wildly lucky. But I didn’t know what I was going into: I had no idea how hard it is, how lonely it is, and how it’s an activity that can really riddle you with self-doubt in a way that I don’t often experience. I’m usually fairly okay with who I am, but writing a book brought up all of my insecurities. I’m lucky, and it was awesome, but this book was not an easy thing.

JH: Why was it important to you to self-identify as disabled in such an up-front way from the very beginning of the book?

KT: A couple of reasons: if you meet me in person and see me moving, you’ll immediately know I’m disabled. It’s a huge part of my identity and how people respond to me in public, and I appreciate that part of my identity. It’s a huge part of my identity and I’m really proud of it, and I want everybody to know. So it would feel weird to write a book and not be really up-front about that being a part of who I am, for one. Then for two: there are some amazing disability activists doing incredible work out there, and I wouldn’t necessarily compare myself to them because we’re all different, but I hope that we’re all adding voices to a wall of sound that will make people more aware of disability. I wanted to be a part of that movement. I think disability justice needs to be talked about all the time, and I wanted to do that in a way that felt good for me.

KT: Oh, I feel like I answered this really well last time and I can’t remember what I said! (laughs)

I’ve written so much about being queer and disabled, and I talk about it a lot – I feel like people are probably sick of hearing me talk about it. But for me, those two identities really intersect and overlap and inform one another in an obvious way. Because I have always been disabled, I was never going to fit into the mold that so many of my straight, Catholic peers were falling into. My life was never going to make that kind of narrow, heteronormative sense. It only makes sense for me that as I have veered off all the other normative paths, I have also veered of that of my sexual identity.

I also really love the word queer, because I think it allows for difference in a way that isn’t just about who you’re fucking – or who you’re having sex with, sorry – (laughs)

JH: I don’t know if we have to cut that or not; I’ll find out. (laughs) How did we not ever say that word last time?

JH: We didn’t! We just stayed away from it.

KT: It’s in all my writing.

JH: Queer is also used sometimes as a verb, right?

JH: As an aside; but I think that makes sense in the context of what you’re saying.

JH: (laughs) Queer is your crush. Your word crush?

JH: Building a little bit on that last question, how have your identities impacted your experience as a writer? I’m wondering whether you encountered any barriers yourself because of your identities, and whether you think disabled writers and queer writers face barriers in getting published and writing.

KT: I think that, without a doubt, hands down, disabled and queer writers face a lot of barriers all the time, in all acts of life. I would be shocked if publishing were this safe zone where everything is rainbows and puppies. I can’t imagine that’s how it works.

KT: (laughs) For me, it was a really positive experience, because Invisible is super small, and so I was able to talk to the people who were publishing my book directly, and they would reassure me and talk to me and figure out exactly what I wanted. I was working with people who are feminist and have an analysis around disability, so it wasn’t like I had to explain everything to them all the time. I imagine if I were working with people who weren’t already radical in some ways, I was have to do so much initial priming about where my politics lie, because the way that I speak is so informed by my lefty leanings.

I hope that, generally, the way I speak allows people who aren’t in the same political vein as me to understand what I’m saying, but it was really nice to be able to write a book and to be unapologetically who I am. It was a great experience, but I don’t think many experiences are like that. I think that I really lucked out, and I can’t imagine trying to do this with somebody who wasn’t already radical. It would be hard – really, really hard.

JH: So Invisible’s size and lack of mainstream-ness was an advantage in this case?

KT: For me, definitely, yeah. I think I said this before: I was interviewed in a publication here, and the interview was awesome, and the journalist was so great. At the time, I was writing brackets around the “dis” in disability. I was trying to figure out how I liked that word to be represented. The woman that was writing the article really wanted to respect me and use the type that I was using, but it was definitely a debate that we had to have, because it wasn’t grammatically correct. I’m sure that folks who use the pronoun “they” do that debate all the time! It’s tiring when you can’t choose your own words for the sake of some old, systemic belief that is really being eroded quite quickly anyway.

JH: Final question: what is the most important thing that you’re hoping to achieve with this book?

So that’s my base hope, and then in a grander scheme, I guess I hope that folks who don’t already think about disability justice, or maybe who haven’t encountered sex-positive, queer, disabled feminists before will find my book and will be like, “whoa!” and their eyes can be opened to other awesome, radical folks doing the same kind of stuff.

I really like my book, and I feel that it is a primer in a lot of ways. I’m not a radical queer theorist or a radical disabled theorist. I don’t think I’m writing anything that is intensely academic. I think it’s a relatively easy read and I hope it will steer people toward more incredible disabled writers, too, like Eli Clare and Leah Lakshmi and all the other incredible queer folks who are doing writing around disability justice.

JH: That’s great. It’s been a week since we last talked; have you started to get feedback on the book? Have people talked to you about it?

KT: Yeah, I’ve gotten a bit of feedback. Because I have a lot of friends here, a lot of my friends are reading it. And that’s nice, and also a little bit uncomfortable.

JH: Because they’re reading about your sex life.

KT: I mean, I would tell them anyway. (laughs) But it’s also a bit funny to make a piece of art and then ask your friends to purchase it. I just want to give it to you, but I can’t. I don’t have that many copies.

People have generally been telling me they like it. A woman who works for the paper here said, “yeah, I love it!” so that was great. She’s not my close friend, so she doesn’t have to be nice to me.

It’s been a week since we spoke, and in that time, I think I’ve gotten a little more sure of myself. I hope it’s just a continuing upward trajectory.