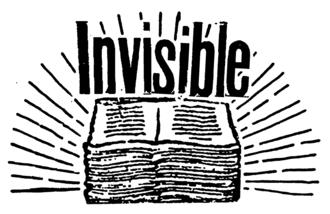 Engaging, literary, and current has been Invisible Publishing’s mandate since day one. Started in 2006 by Robbie MacGregor, Nic Boshart and Megan Fildes, Invisible’s focus is on publishing contemporary Canadian books that are affordable and look awesome. Change is on the horizon, though. Here’s an exit-and-entrance interview with Invisible’s current co-publishers that looks at where things are now in transition, and where they’ll be going in the future.

Engaging, literary, and current has been Invisible Publishing’s mandate since day one. Started in 2006 by Robbie MacGregor, Nic Boshart and Megan Fildes, Invisible’s focus is on publishing contemporary Canadian books that are affordable and look awesome. The press may be small in scale, releasing between 4 to 6 books each year, but they take their work and mission seriously; in just eight short years they’ve collected a slew of award nominations and wins, established a fantastic backlist, and built a seriously excellent reputation.

Change is on the horizon, though; in January 2015, Invisible announced that Leigh Nash would join as Co-publisher, alongside Robbie MacGregor, and that MacGregor would step back from the publisher role completely in the fall of 2015. Here’s an exit-and-entrance interview with Invisible’s current co-publishers that looks at where things are now in transition, and where they’ll be going in the future.

Leigh Nash: What do you value most about Invisible?

Robbie MacGregor: Invisible Publishing is a super cool, no-bullshit company. It's run professionally, by people serious about making and moving books, but it's also always been a place where people and ideas got treated right and got the time and attention they deserved.

RM: What makes Invisible Publishing a good fit for you? Why's this firm the right place for you?

LN: Invisible is a good fit for me because I’ve admired your books from afar for years—they’re beautiful inside and out. I also love the way Invisible exists in the world; the aesthetic is one I totally identify with. I co-started a chapbook press called The Emergency Response Unit in 2008 with my husband Andrew Faulkner. It was a crash-course in publishing — generously funded by OSAP — and our goal was to make attractive and affordable books. I think that aligns perfectly with Invisible’s mandate. This whole situation is a perfect example of serendipity: I had to leave my job at Coach House Books about a year ago because Andrew was having some pretty serious health issues, and even though I’ve been freelancing as a bookkeeper for CHB, I’ve missed the non-numbers side of publishing. And now I get to tackle all of that for a press with a wicked backlist, and a (hopefully) equally wicked future frontlist.

LN: Why have you decided to leave?

RM: I've decided to get out of the way so that Invisible Publishing can keep growing, getting better, and stay cool. I'm old, tired, and wasn't up to being a full-time publisher. You've got the ideas, energy, ability to take things where they need to go. I'll stay on the board and help out when and as required (as will the other founders), but it's more than time for a new Publisher.

RM: You've worked in publishing before, why come back to an industry that's supposed to be on the rocks? (Aren't we all about to be replaced by robots? Seriously.)

LN: Obviously, it’s because I’m a robot. I’m also a sucker for punishment, and a complete and utter romantic when it comes to all things books. I think this is actually an awesome time to work in publishing, and especially small press literary publishing in Canada. We have it pretty good; there is a wealth of incredible writing talent in this country, and I think small presses like Invisible can do right by those authors by giving them more attention than the bigger houses. I’m a poet, and I like to make things like chapbooks and broadsides; I have to believe that there will always be a place, and a demand, for good words on paper. Besides, hasn’t publishing been on the rocks for the longest time?

LN: What did you like/dislike about being a publisher?

RM: Being the head of a firm is great and terrible. You're ultimately responsible for what goes down, for the list, for successes and failures large and small. You can be proud of the firm and it's accomplishments. You can wear those and it's great. You're also the first person people look for when they're stressed (panicked?), when there's a problem, you have to do a lot of hand-holding, and help others learn their roles, be willing to say 'the buck stops here'. That stuff can be a bit exhausting. You can't have one without the other, but I'm maybe looking forward to being a little less diplomatic for a while.

Fear of Fighting // The Art of Trespassing // Migration Songs

RM: Do you feel ready to be a (capital 'P') Publisher? Have any tricks up your sleeve?

LN: I do and I don’t feel ready. You know? But I’m optimistic that’s a good thing. I’m super lucky to have worked with the best of the best over at CHB — especially the multi-talented Alana Wilcox, who has mentored me in everything from editing to contracts to Neko Atsume. And I feel like I have a good support system through Invisible’s board, and through all the other excellent publishers I know. As for tricks up my sleeve? I can’t break the magician’s code, but I do believe in making work fun, so I hope to keep Invisible’s super cool, scrappy spirit alive!

LN: What has been good/enjoyable/satisfying for you as publisher?

RM: When you start working with an author, sometimes there's nothing more that an idea. Eventually there's a book; a real thing that's out there in the world. I still get a charge out of that. It's sort of amazing. I got to pick projects and people I believed in, make cool books, help get them noticed, read, recognized. That was pretty cool.

LN: In a perfect world I’d hope to grow Invisible into a giant Transformer publishing robot that could take on the Random Penguin Decepticon. But deep down what I really want is the satisfaction you mentioned of working with awesome authors and publishing awesome books. I’d like to expand Invisible’s reach even further by selling direct through the website (coming soon!) and hooking up with a solid US distributor. I feel like I have a good handle on publishing’s business basics, and I’m stoked to be able to work more directly with authors on the editorial side of things.

LN: And has anything been frustrating/difficult/upsetting?

RM: I started out as a real idealist. I think I'm still a bit of an idealist, but I now know a lot about boring stuff like budgets, balance sheets, inventory, management, etc. I became a manager and a business person and a director. You have to if you want to run a 'super cool, no bullshit company' that also doesn't immediately fail, but it doesn't always feel very punk, and it's not always that much fun. Ha.

RM: Speaking of which, is there anything you're dreading about your new job?

LN: I’m dreading having to explain to east coasters why Invisible will be relocating to Marmora, Ontario. Invisible has had a phenomenal presence in Halifax over the years, and two board members are still there, so I hope we can keep the love alive. The flip side, though, is that I’m excited to move the press to Ontario so that we can take advantage of the greater funding opportunities that exist here and the potential growth that could bring.

LN: Describe the qualities and characteristics of the person who is most likely to succeed in this role with Invisible. [Note: I am fishing for compliments here, obviously.]

RM: They should be named Leigh, and be the best. They should know publishing inside and out, but also have a sense of what they want to change/challenge, do different and do better. They should have a sense of humour. They should get what it means to 'manage expectations', and have just the right amount of patience. They should spend 6–8 months surprising me, and making me feel totally confident in their abilities without ever seeming to break a sweat. I feel like someone like that would be a great Publisher.

RM: But what skills or qualities do you think are going to make you successful as a publisher?

LN: So far, I’m learning that the best thing to do is go with the flow and prioritize wherever possible. Every day is different, which is great in that there is no way I will ever use the word ‘bored’ again, but terrible in that it’s almost impossible to plan. I like to solve problems, I like to make people happy, and I like to make things. I also really, really love books. Which sounds like an obvious prerequisite to working in publishing, but publishing also tests that love pretty frequently. I am getting better already at making decisions, which is probably the most difficult part of the job. That, and I’ve renewed my faith in excellent project management software and my Google calendar. Without technology and its incessant reminders, I would be toast. Score one for the robots!

Jim Guthrie: Who Needs What // Hot, Wet, & Shaking: How I Learned to Talk About Sex
Bourbon & Eventide

LN: Are you happy to say what you’re going onto next?

RM: I'm going to start seriously working on radical life extension and look into the possibility of uploading my consciousness to some sort of digital medium. Beyond that, I can't get into specifics.

RM: What can you say about your plans for the future of Invisible Publishing?

LN: For the next little bit, things will be status quo while I get up to speed on how to run the company. But we’re getting there, and I have an eye on a couple of future projects — including a new imprint — that I think will really play to Invisible’s strengths as a press that publishes cool, really, really, really ridiculously good looking Canadian books.

Thank you to Robbie and Leigh for sharing some of the behind the scenes magic at Invisible Publishing! Get to know more of our publishers by checking out previous In House features. 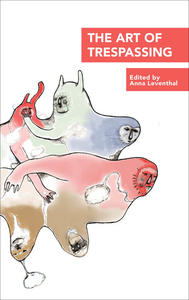 The Art of Trespassing