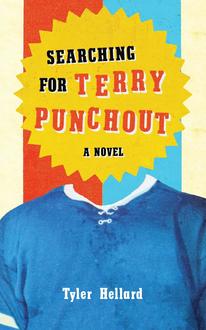 Who: Tyler Hellard grew up in Prince Edward Island, graduated from St. Francis Xavier University and now lives in Calgary with his wife and kids, where he writes commercial copy, technology criticism and essays. His non-fiction has appeared in THIS Magazine, The Walrus, and on CBC Radio. Before finally quitting hockey at 18, he was pretty bad at it.

Why you need to read this now: Searching for Terry Punchout is the King Leary for the Maritimes, a thoughtful, warm-hearted, and deeply human sports tale, one that will resonate with any reader who has wondered if you can ever really go home again. Tyler Hellard has created a thoughtful, warm-hearted, and deeply human sports tale, a vivid portrait of small-town hockey life, of fathers and sons, of feeling left behind and leaving things behind, of clinging to glory and grasping for meaning. With this strong debut, Hellard makes sense of what home really means, and in doing so reveals how close we actually are to the people and places that can often feel so far away.

Adam Macallister’s sports writing career is about to end before it begins, but he’s got one last shot—a Sports Illustrated profile about hockey’s most notorious goon, the reclusive Terry Punchout—who also happens to be Adam’s estranged father. Adam returns to the fictional Pennington, Nova Scotia, where Terry now lives in the local rink and drives the Zamboni. For Adam, going home means drinking with old friends, revisiting neglected relationships, and dealing with lingering feelings about his father and dead mother—and discovering that his friends and family are kinder and more complicated than he ever gave them credit for. Searching for Terry Punchout is a charming and funny tale of hockey, small-town Maritime life, and how, despite our best efforts, nothing can save us from becoming our parents.

When it came time to write this novel, Tyler Hellard looked at hockey biographies and thought it would be fun if someone wrote one about a goon. He then realized that he’d like to write about being from a small town himself, a story that would ultimately blend family, sport and reconciling yourself with the people and place you grew up with. Tyler borrowed the title for this debut novel from Stephen Brunt’s Searching for Bobby Orr and the result is a brisk debut that beckons the reader to throw down the gloves and pick up a copy from their local indie bookseller!

Searching for Terry Punchout is a teaming of King Leary meets Garden State meets Born Into It: A Fan's Life.

Many thanks to Julie Wilson for sharing  Searching for Terry Punchout with us. For more debut fiction,  click here.

January 19, 2019
Just the Thing: Books to go with that sports memorabilia