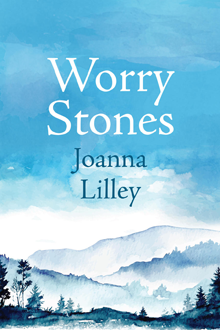 Our #fridayreads this week is  Worry Stones (Ronsdale Press), a first novel for author Joanna Lilley. The novel follows main character Jenny as she leaves her life in the Canadian Arctic behind after learning about her mother's stroke. Through the turmoil of reconnecting with her sister and estranged, cult-following parents, Jenny finds the path towards rekindling her long-lost creative and artistic identity. With its beautifully poetic prose, this is a novel we're glad to be taking with us into the weekend.

Who: Joanna Lilley is the author of the short story collection, The Birthday Books, and the poetry collections, If There Were Roads and The Fleece Era (nominated for the Fred Cogswell Award). Worry Stones is her debut novel. Originally from the UK, Joanna emigrated to Canada in 2006 and now makes her home in Whitehorse, Yukon. Find her online at www.joannalilley.com.

North of the 63rd parallel in Iqaluit, Nunavut, British art historian Jenny Ross is conducting research for her PhD, studying carvings by the Inuit artists of the arctic. She is falling in love not only with the pristine, endless tundra but also the irresistible Canadian geologist, Dominic. Step by step, Jenny is also gaining closure on a traumatic incident and a childhood rife with family drama.

Until one day when Jenny receives an email from her sister, subject line: bad news. Jenny’s mother has suffered a stroke back home in Scotland.

Jenny has not spoken to her parents in eight years, not since they suddenly decided to sell their beloved family home and guesthouse, Willowbrae, and join Gallachism—a bizarre spiritual cult on a remote peninsula on the coast of Scotland. In order to join, her parents were forced to cut all ties to non-Gallachist life.

Weaving the narrative between Jenny’s childhood and the present-day action, author Joanna Lilley shows us what led to Jenny’s parents joining the cult and the impact of that choice on the family. But just as the reader is close to solving one puzzle, new mysteries arise. Why does Jenny keep hidden her own artistic creations? Why is physical intimacy seemingly impossible for her? And why did Jenny’s sisters sever communication with their parents before they became Gallachists?

Jenny is at once a complex and intriguing character, relatable especially to readers who took on the emotional labour in their families growing up. In every household quarrel, Jenny sat uncomfortably on the fence, striving to make everyone happy and keep the family together. It is a self-appointed responsibility that gives Jenny anxiety, and she collects pebbles, which she calls her “worry stones,” from around Willowbrae and elsewhere to place on her stomach and restore a sense of calm. It is a coping mechanism that she carries into adulthood.

Now Jenny must decide whether to stay the course in Nunavut or return to Scotland to help her mother. Adding pressure is not knowing whether her father, now a prominent Gallachist leader, is there with her mother or whether she escaped the cult and, alone and vulnerable, is in dire need of Jenny’s help. Despite her reluctance to reopen old wounds, Jenny finds herself compelled by this fresh opportunity to heal the fractures in her family to make things whole again.

Art and artistry wend their way through the novel as a leitmotif: what drives us to create art, why we consume it, and how art informs us of who we are. Fans of Lilley’s award-nominated poetry, and readers who appreciate elegantly crafted imagery, will enjoy Worry Stones—a novel formed, sculpted, and chiselled over a span of 17 years.

X plus Y: Navigating familial collapse in Miriam Toews’ A Complicated Kindness meets the stunning sense of place and blending of past and present in Jane Urquhart’s A Map of Glass. 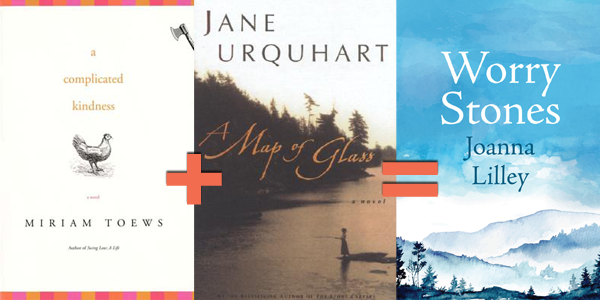 For more debut fiction (delivered on a Friday), click here.