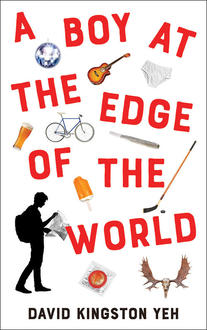 First Fiction Friday: A Boy at the Edge of the World

Debut fiction from Toronto playwright David K. Yeh, A Boy at the Edge of the World (Guernica Editions) sees a small-town Ontario boy come of age in the big city where love, lust, and friendship converge on the road to self-discovery.

Who:
Born and raised in Kingston, Ontario, David K. Yeh moved to Toronto in 1993. Since 2004, David has worked as a counsellor and educator with LGBTQ2S youth. Along with his husband and a family of raccoons, David resides in Toronto’s east-end neighbourhood of Leslieville, up the street from a circus academy. He has written four plays produced in Toronto, and his short fiction has appeared in numerous magazines. A Boy at the Edge of the World is his first novel.

Why you need to read this now:
It’s no easy thing to be lost out there in the world. The fear you feel when you step out that door for the first time, leaving the warmth—the comfort—of your childhood behind. It could be moving to a new place to start a new life, or it could be serendipitously meeting a person that you instantly can’t live without. It’s a scary creature that not many can say they have stood up to without doubt in their hearts. If you think hard enough, you can imagine that creature. And it stands at odds with Daniel Garneau. He is a young, gay man who left small-town Ontario to move to big-city Toronto, and is also the leading character in David Yeh’s A Boy at the Edge of the World.

For Daniel, facing the creature was something he longed to do. Growing up wasn’t easy. His parents weren’t there for him, having died in a fiery car accident. He sought solace in hockey, but when rumours began to circulate about a romance between him and the new assistant coach, he was gifted two black eyes and told to hang up his skates. Once in Toronto, Daniel encounters two types of love. Marcus, who’s that kind of lustful temptress. And David. He’s got that warm, right feel. He’s the creature we all look for in a kind of love. And he’s the creature Daniel seeks to slay.

In A Boy at the Edge of the World, David Yeh unfolds a story about the adventure of life. The perils, the pitfalls, the promise. It is a story of deep friendship, of loss, of grief. There is loneliness, but there is also community. At its heart, it’s a story about a boy looking for his place in the world. Even if it is right at the edge.

A Boy at the Edge of the World is a kind of Andre Acimen meets Stephen Chbosky drama with a dash of Christian Oster.

Our thanks to Anna at Guernica Editions for sharing The Boy at the Edge of the World with us! For more debut fiction, click here. 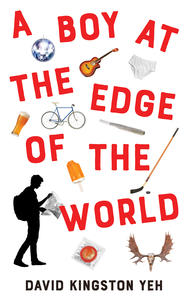 A Boy at the Edge of the World

September 19, 2017 by Mandy Bayrami
This Week in Book Events

October 6, 2014
Raccoon VS Bear: A Cage Match, In Conversation with Beatriz Hausner