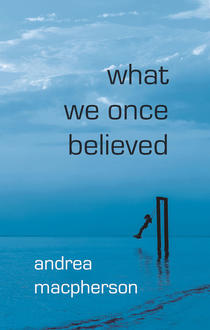 First Fiction Fridays: What We Once Believed

Andrea MacPherson's What We Once Believed (Caitlin Press) takes readers to summer 1971 to a cul-de-sac community of Oak Bay on Vancouver Island, BC. There, we meet estranged mother Camille and her eleven-year-old daughter Maybe who've just reunited, becoming the talk of the town within their community. The novel speaks to questions surrounding motherhood and expectations of women, both of themselves and each other. 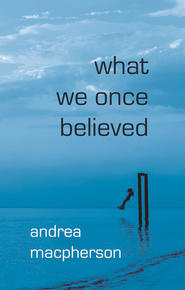 What: What We Once Believed (Caitlin Press)

Who: Andrea MacPherson was the Editor of Prism International and the Reviews Editor for Event Magazine, and is the author of three poetry collections, including Ellipses, Away, and Natural Disasters, which was longlisted for a ReLit Award. She is currently an Associate Professor at the University of the Fraser Valley.

When estranged mother Camille returns into the life of the eleven-year-old daughter she named “Maybe,” questions of sacrifice versus selfishness split the cul-de-sac community of Oak Bay on Vancouver Island, BC. It turns out Camille has written a book, entitled "The Other Mother," describing how she joined the Women's Liberation movement that rocked the United States in the late 1960s. In the present time of 1971, Camille's neighbours begin to get to know her better, some even reading her book, and they start unpacking her intentions for returning home. Maybe is the main eyes and ears for the story, though the reader also witnesses the unfolding life of Robin, a stay-at-home mother who is harbouring a guilty secret, as well as new resident Mary Quinn. All is not what it seems in the suburbia setting, and when word gets out that Camille is writing her second book, a memoir with sweeping judgements of the personal lives of her new neighbours, it stokes a deeply buried fire within Maybe. She decides she has to do something, anything, to prevent her very own mother from ruining her future, just as she did her past. But ultimately, Camille isn't the only "bad mother" character in the novel, and as the reader begins to start keeping score of all the flaws between the women of Lear Street, a deeper message begins to emerge. The expectations these women have for themselves, as well as those that their children, lovers, and family have for them, are put into question, tousled around, and only put back into place in thanks to the safety and innocence of Maybe and her childhood friend.

Jen Sookfong Lee, author of The Conjoined, calls the book "a deeply complex story of women on the social, geographic and emotional edge" while The Winnipeg Review says "MacPherson is clearly a poet, and her lyricism makes for engaging prose…”

What We Once Believed takes a snapshot of history and stretches open the motives behind the people at the centre of societal change. Read it for yourself and recommend it to someone who will appreciate looking through the wise eyes of a full spectrum of distinctive mothers, grandmothers, and daughters.

X plus Y: What We Once Believed is No Doubt’s song, “Just a Girl,” dropped into the sleepy corner of an Alice Munro story. 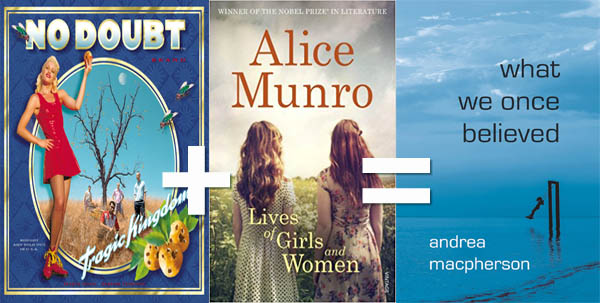 Our thanks to Michael Despotovic at Caitlin Press for sharing What We Once Believed with us. For more great debut fiction, click here.

May 15, 2020
Jules' Tools for Social Change: A Feminist Booklist