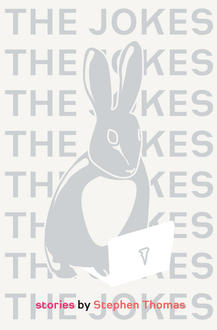 What does it look like when fiction takes a running jump at social media and smashes through it like a plate glass window? What kind of creature comes out the other side? We think it must look something like The Jokes, which is an extended interrogation of the contemporary moment disguised as a collection of stories as short as five words. 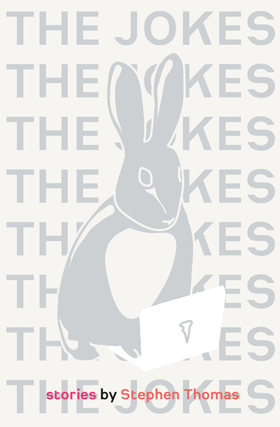 Born in Kingston, Canada, Stephen Thomas is a Toronto-based writer. He has worked in China, England, and Cambodia; co-founded Double Double Land, an art space in Toronto’s Kensington Market; and completed an MFA at the University of Alabama. His work has appeared in Hazlitt, Playboy, and The Atlantic’s Citylab blog, and he’s received a Truman Capote Scholarship and an Edward F. Albee Fellowship.

What does it look like when fiction takes a running jump at social media and smashes through it like a plate glass window? What kind of creature comes out the other side? We think it must look something like The Jokes, which is an extended interrogation of the contemporary moment disguised as a collection of stories as short as five words. With stories so short, and having been named a runner-up for the Metatron Prize for Rising Authors of Contemporary Literature, not to mention the gender nonbinarism it dips in and out of, it’s clear The Jokes is in dialogue with online culture and communication, particularly tweets and Facebook updates, at least as much as traditional fiction. This energetic little book is so much more than that, though. In a deceptively calm tone, the stories’ narrators (narrator?) march implacably into the most whisper-desperate corners of our lives, boiling over in some stories into frantic howls and, in other stories, landing squarely on images of quiet keening beauty.

The conceit of The Jokes seems itself to be a kind of joke: it’s not obvious at first, but eventually you realize these tiny stories are meant to be send-ups of old-school one-liners like “A man walks into a bar,” or, “A priest, a rabbi, and an imam are naked in a steam room.” Except instead of delivering comfort in the form of an identifiable punch line, the more cerebral stories pull the rug out from under themselves even as they unravel, leaving the reader feeling like they may have accidentally switched tabs mid-story. It’s a fascinating effect and is also kind of impossible to describe. Fans of Lydia Davis, or @sosadtoday, or anyone impatient with predictable prose, may find themselves with a new favourite author.

Amidst all this strange energy, however, we do catch glimpses of calm: sincere slices of life rendered with such an exceptional package of classically realist psychological nuance and an eye for striking similes and physical detail that the rest of the book seems even stranger in contrast. A mother reading in a kitchen alone at night, a father chopping wood, a man and woman discussing their relationship post-breakup—after the surreal, Ben Marcus-y landscape created by the rest of the stories, these islands of normalcy seem almost suspicious. As in the most fraught scenes of a David Lynch movie, in these stories, reality itself often seems tentative, suspended, floating free among the genres. If that sounds like your life, pick up this book. It will be a friend to you.

Thank you to BookThug, especially Hazel Millar, for sharing The Jokes with us. If you love discovering new authors, check out our previous First Fiction Friday picks. 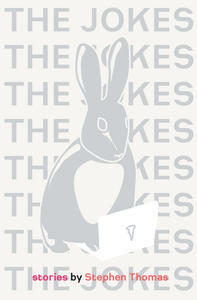