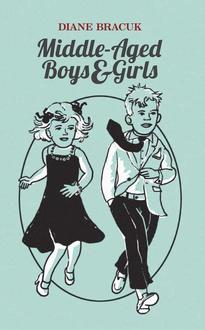 Middle-Aged Boys & Girls is a collection of short stories about adults stranded in various stages of adolescence. Growing older, but not necessarily growing up, is the central theme of these stories, featuring characters, who through character, circumstance or a combination of both, are stuck in adolescent roles of rebel, outcast, infant terrible, and cool kid to name a few. 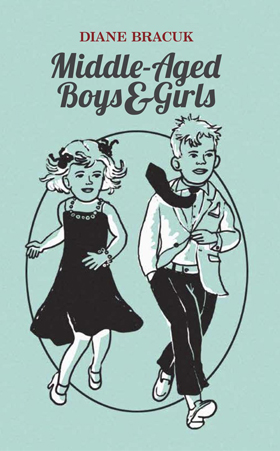 Diane Bracuk is a Toronto writer whose work has been published in leading literary and mainstream magazines. She is the winner of the 2015 PRISM international creative non-fiction contest, and a finalist for the National Magazine award in personal journalism.

Middle-Aged Boys & Girls is a collection of short stories about adults stranded in various stages of adolescence. Growing older, but not necessarily growing up, is the central theme of these stories, featuring characters, who through character, circumstance or a combination of both, are stuck in adolescent roles of rebel, outcast, infant terrible, and cool kid to name a few.

Notably, all of Bracuk’s characters are linked by losses—of status, or looks, of health, of confidence—which forces them to life’s inevitable turning point.
There’s “Dirty Laundry”, a story about a woman who doesn’t discourage her husband from flirting with a young female tenant, “for it seemed essential to keep [them] from becoming eunuchs, to maintain his bad-boy myth.” Then there’s the long-suffering mother of the racing enthusiast in “Memory Loss”, who, despite concerns for her son’s welfare, secretly admires her bad-ass husband, “sweltering under his leathers, unloading his bikes with arms that were more tawny and muscular than any of the other doughy, dutiful, neighborhood husbands.”

Sometimes, mature characters are unceremoniously tossed back onto vulnerable former selves, such as the protagonist in “Valentine”: a lonely single mother who accidently discovers that her 14-year old daughter is sending out naughty valentines, and is probably having sex, “the kind that had always been slightly beyond [her], and which mocked her hopes that Nicole’s first boyfriend would be a nice, safe sort, unthreatening to both of them.”

Beauty, with all its unearned privileges, is the subject of “Thick”, in which an aging model, who has always prided herself on being above the superficiality of the fashion world, realizes that her looks have rendered her almost socially retarded, and “the favors granted her were not for the words that came out of her mouth, but the mouth they came out of.” In “Salvation”, a once successful television producer who was never much of a do-gooder, “preoccupied as she was with doing good for herself” is forced to confront her own adolescent bullying when volunteering with at-risk children. Darker sentiments flow through stories such as “Prey”, where a once sought after divorcee realizes that she has been duped by a young man who played on her vanity by convincing her that she still had “it”—the illusive “it” factor that transcended looks or age.

In a voice that is at once stark and compassionate, Bracuk asks the question: “what does it mean to grow older?” Given that we are living in an age where fifty is the new forty, and forty is the new thirty, and twenty is the new god-knows-what, these stories, with their sometimes painful, sometimes funny and always unflinching truths, resonate.

Middle-Aged Boys & Girls is a combination of the dark, sardonic insights of Lynn Crosbie's Life is About Losing Everything with the taut, muscular prose of Alice Munro’s Runaway. 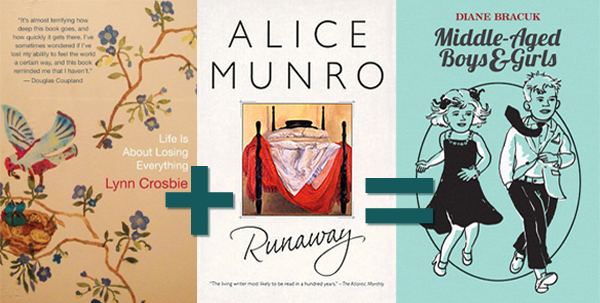 Thank you to Guernica Editions, especially Anna Geisler, for sharing this smart new collection of stories with us. If you love discovering new authors, check out our previous First Fiction Friday picks. 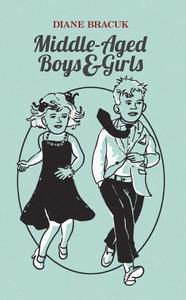 January 7, 2016
Poetry Curious? New to Poetry? Check out these books.

April 29, 2015 by Kathryn Mockler
“Hearts Hot and Time Passing:”* Looking back on the early 2000s and its girl outlaws who broke the rules