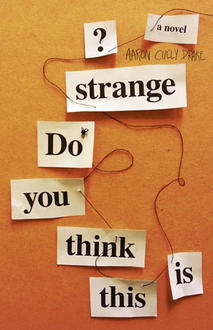 First Fiction Fridays: Do You Think This Is Strange? by Aaron Cully Drake

Both humorous and heartbreaking, Freddy’s is a coming-of-age tale with an important message: autism is not a defining characteristic for those who are on the spectrum. It is neither a label nor a lens through which all of a person’s actions can be explained. Freddy is a teenager with autism, not an autistic teen. 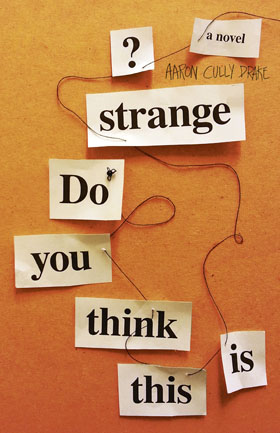 Aaron Cully Drake has written for newspapers and magazines and is a former reporter and editor. He lives in Vancouver, British Columbia, with his wife, son, and autistic daughter, all of whom keep advising him to shut up. You can follow him on Twitter @Autistical.

Freddy has autism. It’s not a unique condition, it’s not Voldemort (the Condition-That-Must-Not-Be-Named), and it’s not the root of all of his problems—despite what the majority of people might believe. In fact, most of Freddy’s problems are rooted in the fact that he’s a teenager, and an exasperating one at that.

Freddy’s problems are these: his mom left nearly a decade ago, never to be seen or heard from again. His relationship with his father is strained, at best, and his dad drinks too much. He’s been expelled from school for fighting—despite the fact that it was self-defense—and he’s been sent to a new school where he struggles to find a quiet place, and is forced to have scheduled conversations with a counselor.

But then Saskia reappears. They’d been in the same group therapy sessions as children, but when his mother left, his father moved them across town, and Freddy hadn’t seen her since. Now she sits silently across from him at his lunch table. And Freddy doesn’t mind. In fact, their friendship acts as a catalyst, steering him to piece together the puzzle he didn’t know he was living with.

“I wanted to write a story with a different take on autism,” explains Aaron. “On the outside, Freddy is unemotional, literal, and has difficulties holding long conversations. On the inside, he is a symphony of thoughts and ideas. Freddy thinks in rich verse, thick with metaphors and sarcasm. All of this is anathema to autism, or the commonly-held perception of what an autistic person is supposed to be like.”

As Freddy navigates the varied relationships in his life—with his friend who isn’t his friend, his father, his counselor, his boxing coach and partner, and with Saskia—his internal monologue will make you laugh, even if his external actions make you cringe. He’s witty, clever, and doing his best to find a place where he fits in. He’s someone you’ll recognize in your children, your siblings, your friends, and yourself.

Both humorous and heartbreaking, Freddy’s is a coming-of-age tale with an important message: autism is not a defining characteristic for those who are on the spectrum. It is neither a label nor a lens through which all of a person’s actions can be explained. Freddy is a teenager with autism, not an autistic teen.

What other people are saying about Do You Think This Is Strange?

“Consider this the antidote to The Curious Incident of the Dog in the Night-Time. Whereas Mark Haddon’s 2003 novel . . . presented a barely functional savant, the 17-year-old at the heart of Aaron Cully Drake’s debut is someone that the majority of autistic people might recognize . . . Freddy is an authentically exasperating teenager.” —Globe and Mail

“. . . A nuanced and sensitive narrative of conflict, comedy, and trauma . . . Drake's writing is delightful, and the architecture of the book is subtle and effective . . . Do You Think This Is Strange? is not simply about a boy with autism, but more importantly about the way those who encounter him (including the reader) choose to respond to him." —Quill & Quire

Thank you to Brindle & Glass, especially Tori Elliott, for sharing Do You Think This Is Strange? with us.