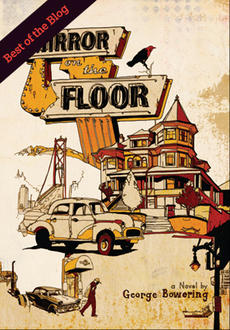 George Bowering is talked about in my house, often and with deep and abiding respect. Stan* talks about him, Stan who has read and reread Bowering dozens of times, Stan who has written about Bowering dozens of times. And while I have read everything Stan has written about Bowering, Bowering's work is almost entirely unread by me. Now I'm rising from my desk on the top floor of the house, I'm descending to Stan's office on the bottom
floor, I am pulling Mirror on the Floor off the shelf (I knew Stan would have it, M&S 1967 cover image looking very much like a Shary Boyle ceramic) and opening it at random, to page 61:
this is what I read:

"Guy's gotta be nice to her," I said, hoping like mad I was saying the right thing.

"Yeah," said Leonard, thinking of me as a bad figure on a big painting. "Nice to her."

Okay. Right away I can see something that's hooked me: a bad figure on a big painting. Irregular simile, big image. Could be anything, it's so big, and yet it isn't anything, not by a long shot. To my imagination a bad figure's now a smear, black spot on a bright canvas, insignificant and obvious.

It never takes much to hook me. My curiosity rises; I wonder can the author sustain this style I'm liking. And so, a promise: I will read Bowering's novel, read it in the 1967 original, this copy once belonging to James F. Woodruff (May 17, 1967), and I'll get back to you. (When I ask him, Stan says Jim was his colleague at University of Western Ontario, but he cannot remember why he'd have Jim's copy. And get this! Stan's not read this Bowering either!) 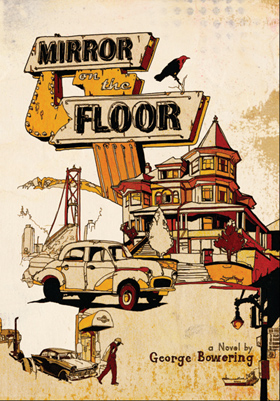 Mirror on the Floor was first published in 1967 by McClelland and Stewart, the first novel from a young writer named George Bowering.

George Bowering is a distinguished novelist, poet, editor, professor, historian, and tireless supporter of fellow writers. Bowering has authored more than one hundred books and chapbooks, books, works of poetry, fiction, autobiography, biography, and fiction for young readers. His writing has been translated into French, Spanish, Italian, German, Chinese, and Romanian. His novel, Burning Water, won the Governor General's Award for non-fiction in 2013. In 2002, Bowering was recognized by the Vancouver Sun as one of the most influential people in BC. He is currently at work on a collection of stories about women. He lives in West Point Grey with his wife Jean Baird.

Mirror on the Floor continues to resonate, not merely due to the potential for nostalgia, but because of the lilting rhythms of the prose, the tension simmering beneath the characters' charming innocence--steeped in the contradictory beauty of the city.

The story focuses on one summer in the life of UBC graduate student Bob Small and his roommate, George Delsing, as they study, smoke cigarettes, endure tedious summer jobs, joust one another with philosophical banter and literary repartee, and strike out on near nightly adventures in Small's "poor old over-traveled yellow Morris Minor" to the pubs and late-night diners of East Hastings and Main Street.

They spend much of their time carousing and engaging in conversation with old-timers, retired seamen, dockworkers, and unemployed loggers. And it is on one such night that Bob Small encounters a mysterious and troubled young woman outside the city lock-up. Her name is Andrea and he can't seem to shake-or understand-the inexplicable attraction he feels for her; and from this night on, like an apparition, Andrea appears everywhere: the library, the bars, the street, and Bob Small is slowly and inevitable pulled into her orbit, an orbit that spins on a tragic and ever-tightening inward coil.

Mirror on the Floor is part of Anvil Press "Lost BC Literature Series," which brings important, out-of-print literature to a new audience. 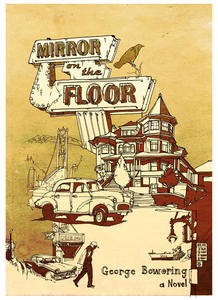 November 17, 2014
The Importance of Being Literary