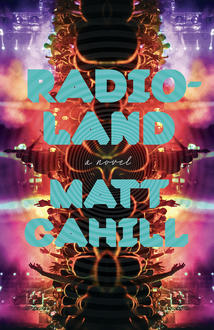 How does the cover design process change when you're particularly close to the work, and author? Award-winning book designer Ingrid Paulson walks us through what it was like designing for Matt Cahill's new novel  Radioland (Wolsak & Wynn) - a book by her spouse, one she'd been reading from its earliest drafts. See early iterations of this fantastic cover and hear Ingrid's approach to this unique situation, below.

Designing a cover happens over a matter of weeks. I receive a cover brief and manuscript from the publisher, read the book at least once before getting down to work, research, sketch, assemble, then present three options to the publisher who in turn shares them with the author.

That workflow flies out the window when it comes to Matt Cahill’s books. You see, he’s my husband. Instead of being handed a final manuscript, I’ve been reading Radioland for years, from first draft onward, watching the lives of Kris and Jill take shape, discussing the finer points of Toronto neighbourhoods and the music scene with the author over glasses of wine. I even drove with Matt to Minesing, Ontario, so he could capture the sensation of driving the same roads as Kris.

So I’ve been thinking about the cover for Radioland for a long time. And because of the author’s relationship with me, I wanted it to be perfect. No pressure.

As the catalogue deadline approached, I realized that after all these years I hadn’t narrowed down a design direction, so I was nervously trying everything I could think of. I needed early feedback, so I passed all of my initial cover sketches by Matt one night. Luckily, he understood the process enough to overlook the rough edges. He was drawn to the spirals, explosions, and radiating circles – a radio or energy signal, but also a way to describe emotional crisis – but he particularly liked a photo I’d found of a music gig with the purple glow of stage lights silhouetting the crowd. 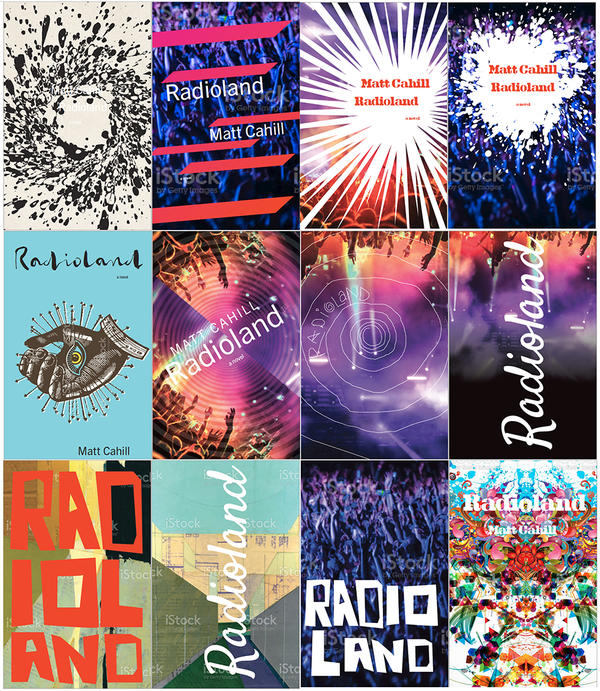 I focused on that image and refined some ideas. In one concept, I placed the crowd on either side of the cover to represent the two worlds – Kris’s and Jill’s – that never intersect. This also neatly tied it to the mirrored image I used on his first novel, The Society of Experience. 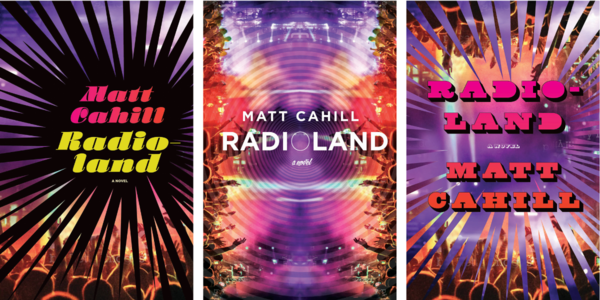 I sent three ideas to his publisher, Noelle Allen, who shared them with Matt’s editor, Paul Vermeersch. Within a few hours, they responded: they both loved the second cover with the mirrored crowds.

Now, most times when a publisher approves a cover without requesting changes, the cover is done. Instead of moving on, I felt this growing doubt: the approved cover wasn’t good enough. I asked Noelle if I could try again (even though it had been approved!). Noelle graciously agreed.

What was it that didn’t work, I wondered? The mirrored image was evocative, the radiating circles created a good dynamic… no, it was the type. It wasn’t holding up against the image.

I searched around for inspiration, something that could signal music, magic, chaos, people hiding behind a façade… I also needed to inject a cool colour into the type to play off the warm concert lights in the photo.

Then it hit me. In the book, Kris’s band is a finalist for the Polaris Music Prize, an award for best Canadian album released that year regardless of genre. Basically, it’s the cooler cousin of the Junos. Their logo is a clear, teal blue and the letterforms are rounded but otherwise straightforward – but the counters (the negative spaces in the o’s) are filled in. Interesting.

I looked for some comparative typefaces, and somehow stumbled on a few families that included a matching set of 3D drop shadows, so I played with those. In one idea I used just the drop shadow – the hidden, inner part of the letterforms, the ghost, the incomplete character. Again, interesting.

Then I took another look at the mirrored crowds: what would happen if I flipped it so the crowds backed each other rather than facing each other – so it looked more like a Rorscharch test? Suddenly the image morphed into this dizzying multi-headed monster, a reflection of both good and evil, arms stretched up and out to catch the title or to beg mercy – or to wield magic. I tossed that idea into the mix and sent over some revised covers. 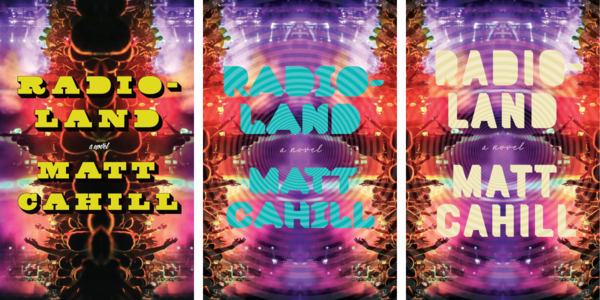 These were all good, but everyone agreed: the teal blue – electric, fresh, and bright – with the multi-headed crowd was the winner. 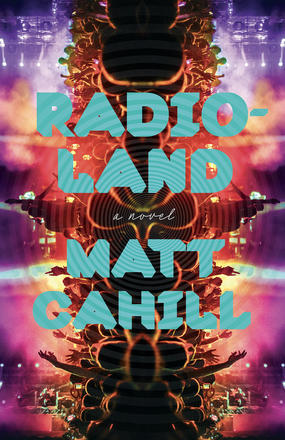 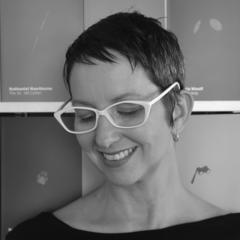 Ingrid Paulson is a book designer and art director living in Toronto. Her work has been recognized by the Alcuin Society and AIGA 50 Books/50 Covers competitions, and has been written about in newspapers, magazines, and (of course) books. She teaches book design at The Chang School, Toronto Metropolitan University.

Many thanks to Ingrid Paulson for walking us through the cover design process behind  Radioland (Wolsak & Wynn). 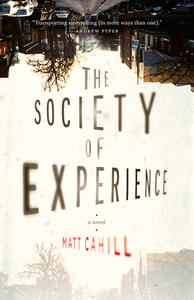 The Society of Experience 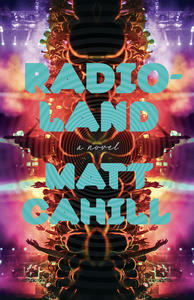